T.J. Zizzo; a part time racer who is fueled by a full-time mentality

No one in Top Fuel takes T.J. Zizzo and his Rust-Oleum Top Fuel team lightly, and there is a good resason for that; they come to win every week.
18 Jul 2020
Kevin McKenna, NHRA National Dragster Senior Editor
Feature

During last weekend’s E3 Spark Plugs NHRA Nationals, T.J. Zizzo found himself in an uncomfortable position during the opening round of Top Fuel eliminations. When opponent Cory McClenathan ran into a mechanical issue that prevented him from staging his Nordic Boats/Revchem dragster in a timely manner, Zizzo’s Rust-Oleum dragster sat at an idle for an inordinate amount of time.

As the engine temperature rose and his fuel tank began to empty, Zizzo’s level of frustration peaked. After what seemed like an eternity, McClenathan’s car was shut off, and Zizzo got the signal to make a single run. Most assumed he’d make a half-track shut off run since nitro engines don’t like being starved for fuel. Instead, Zizzo legged it to a 3.77, one of the best runs of the round. For Zizzo, the risk was worth the reward as he sought to earn lane choice for his round two meeting with eventual race winner Billy Torrence.

Obviously frustrated by the turn of events, Zizzo handled it like a pro, expressing his frustrations on the FOX tv broadcast, but doing so in a professional manner. 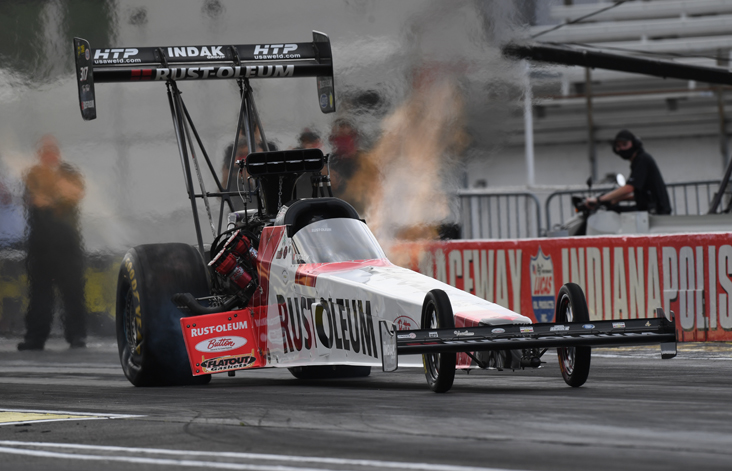 “The deal last week; no one wants to be in that predicament,” Zizzo said. “When it happens, you just do your best to adapt. On the starting line Tony Smith, our clutch specialist, was not happy and my dad [Tony] was not happy and when I got out of the car at the other end, I was livid. Thankfully, I have a great relationship with the people in the NHRA Tech Dept. and [NHRA Vice president Competition] Ned Walliser. We had a talk down there and I spoke my mind. They understood my frustration and by the time I got around to the TV cameras, I was a lot more composed.”

Zizzo estimated that his car burned an extra two gallons of fuel on the run and the lack of fuel looked to be the cause of the brief flash of fire past the finish line. After further review, Zizzo and his crew determined that was not the case.

“When we got the car home, we looked closer and found that the injector broke and that knocked out the burst panel. It didn’t run out of fuel,” Zizzo said. “I was raised to believe that honesty is the best policy so I’m not afraid to admit that’s what happened. I didn’t want anyone to think we were not being honest about the whole deal.”

The lessons learned from last week’s adventure are clear. First, Zizzo’s mentality is what helps separate him from a lot of other part-time nitro racers. While he competes in just a handful of events, Zizzo enters each one with the mindset that he can compete against any of the heavily funded full-time teams, and as such, he’s earned a lot of respect among his peers. That helps explain why he decided to pursue lane choice instead of opting for a half-track pass.

“You’ve got to have that mentality, said Zizzo. “There is no other way to do this. Look, we get to come out here and do some awesome stuff but it’s not worth doing if you can’t compete at a high level. We have team meetings all the time, and we stress that. We talk about what we can do to be more prepared for situations like that, or anything else that might come up. Our program with Rust-Oleum works because we think alike. We have the mentality that we’ll go to fewer events if it means we have a chance to compete. We’re all on the same page when it comes to that.”

Make no mistake; Zizzo is a threat to become NHRA’s next first-time pro winner and the 2020 format, which limits pro competitors to just two qualifying runs, only helps his cause.

“This deal is right up our alley, he said. “I’m fine with two qualifying runs and I honestly think we’ve got the best car and driver combination we’ve ever had since this team was formed. We just need an opportunity to show what we’ve got.”