If you’re a drag racing fan, what’s better than a movie about your favorite motorsport to while away the hours? Here’s our list of 10 of our most treasured movies about drag racing.
08 Apr 2020
Phil Burgess, NHRA National Dragster Editor
Feature

Whether you’re relaxing on your couch streaming entertainment or at the local movie theater, who doesn’t love a good flick? And if you’re a drag racing fan – and we know you are – what’s better than a movie about your favorite motorsport? Many of these can be found on YouTube or through various nostalgia websites.

Here’s our list of 10 of the most treasured movies about drag racing. 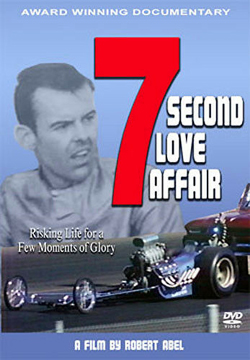 SEVEN-SECOND LOVE AFFAIR (1965)
Synopsis: If you ever wondered what life was like at fabled Lions Drag Strip in the heyday of the front-engined dragster, this one's for you. The film follows the life of Rick “The Iceman” Stewart -- who would famously go on to become NHRA's Chief Starter decades later  -- and his crew around the drag strips of 1960s Southern California. The work of Bob Abel (director) and cinéma vérité documentary filmmaker Les Blank (cameraman), the film is narrated by well-known character actor John Dehner and features an original score by Canned Heat Blues Band.

Review: None other than "Big Daddy" Don Garlits opined, "It's the quintessential film on drag racing ... there was never one before it and there'll never be another one like it."  Jalopy Journal post: "It is one of the best movies to portray the 'Race for the Records' in FEDs. Every time the action switched to the return road, it brought back memories of running across that farmer's field. The high tension electric wires overhead, the crops, the loose dirt, all in the background made it feel like we were just standing there." 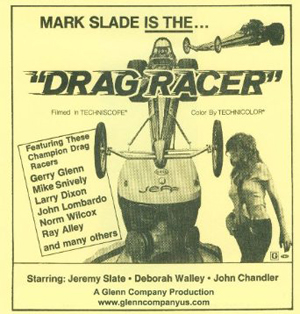 DRAG RACER (1971)
Synopsis: Filmed on location at West Coast racetracks including Irwindale Raceway, Lions Drag Strip, and Orange County Int'l Raceway and featuring racing by quarter-mile greats such as Bill Schultz, John Lombardo, Norm Wilcox, and Larry Dixon, the film has a lot to offer hard-core fans. Mark Slade is the eponymous drag racer in question, trying to get his big break in Top Fuel.

Amazon.com said: “A nice stroll down memory lane; if you grew up attending numerous drag races in the ‘60s and ‘70s you'll enjoy this flashback. For a Hollywood type movie on drag racing, this is pretty good. Nothing can transport you back to the true good ole' days of drag racing, but this is a good movie.” 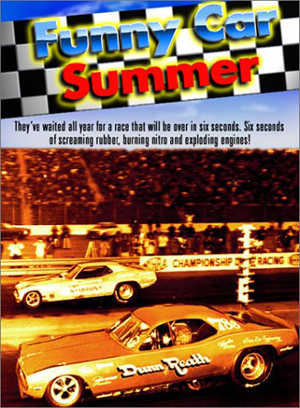 FUNNY CAR SUMMER (1973)
Synopsis:  Funny Car Summer follows Jim Dunn – firefighter by day, Funny Car racer by night – and family as they race across the West with his radical rear-engine Funny Car. Fans will enjoy seeing just how cool-looking and wild the early Funny Cars were (drinking game: take a shot of Mello Yello every time a car crosses the centerline) and why kids like me fell in love with the sport back then. Today’s fans will get a kick out of how much “Big Jim” looks like today’s Mike Dunn and, even 40-plus years ago, references to him as one of the oldest drivers out there, as well as, of course, young Mike bicycle drag racing his Schwinn (complete with parachute).

Rotten Tomatoes said: “Noted photographer Ron Phillips turns director for this fast-moving documentary. Funny Car Summer is an affectionate profile of California fireman Jim Dunn. So what's a fireman doing in a film about Funny Cars? Well, it happens that Dunn spends his off-hours as a champion drag racer. Gorgeously photographed, the film follows Dunn as he enters race after race in the Southwest, manning his fantastic custom-built cars.” 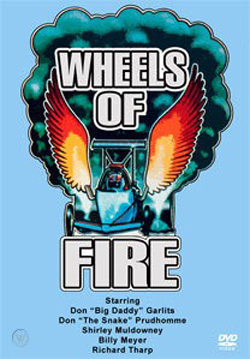 WHEELS OF FIRE (1973):
Synopsis: Not to be confused with the 1985 Mad Max-like movie of the same name, the drag racing Wheels of Fire follows legends of the sport like "Big Daddy" Don Garlits, Shirley Muldowney, Don Prudhomme, Billy Meyer and Richard Tharp on and off the track. Hosted by NHRA hall of fame announcer Dave McClelland, the semi-documentary has tons of great racing footage – including some cool ultra-slow-motion scenes of cars launching from the starting line -- and interviews with all of the above, plus interviews with guys like NHRA founder Wally Parks, fuel-system wizard Sid Waterman, and more, including Meyer water skiing and Muldowney talking about her street-racing days. Raymond Beadle, world championship driver of the "Blue Max" Funny Car, was a technical consultant on the film.

The praise: Drag Racer Magazine wrote, "Wheels of Fire just might be the best drag racing movie ever produced!" 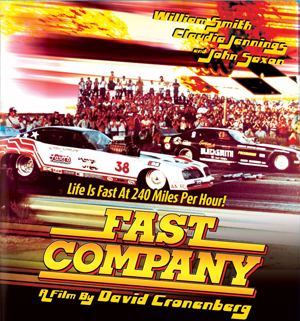 FAST COMPANY (1978)
Synopsis: Directed by horror master David Cronenberg (The Fly, Shivers, Scanners, The Brood, etc.), this B movie, filmed at western Canadian dragstrips and employing the skills of the likes of Gordie Bonin and Graham Light, focuses on ace driver Lonnie "Lucky Man" Johnson (played by William Smith), who wants to push the art and science of racing further, but Phil Adamson (John Saxon), who owns the motor-oil company (FastCo) that sponsors his team, doesn't care about the future of racing, or even about winning. He just wants to sell motor oil. Lots of action, fire, and explosions, and a few non-PG moments.

EFilmCritic.com said: “The races are photographed and composed far more artfully than they had to be, with quiet pauses afterward that few drive-in hacks would bother with. You get a real sense of the firepower of these vehicles, spitting out flames as they scoot down the track, and you frequently get lurching point-of-view shots that literally take you for a ride.” 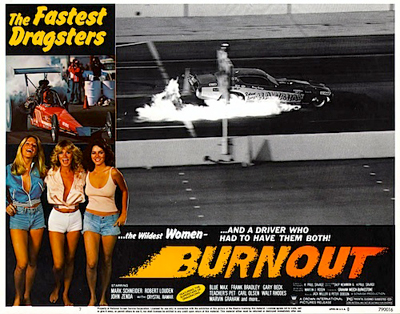 BURNOUT (1979)
Synopsis: The movie-poster tagline "The fastest dragsters, the wildest women, and a driver who had to have them both" clues you in on what lies behind the scenes when you green light your video player, but it's all good fun with a familiar plot: Rich kid wants to drag race, father doesn't want him to, but finally joins him. There's a lot of footage from Southern California tracks as the kid shows his dad what the scene is all about. They build a car and go racing. Cameo appearances from big names of the '70s including Don Garlits, Marvin Graham, Gary Beck, Shirley Muldowney, Don Prudhomme, Raymond Beadle, and Tony Nancy.

Brian Lohnes said: "The acting and plot suck beyond all recognition but the racing footage, the drag racers and industry people shown, all of that is awesome and well worth the watch.  You will see things that no one else has recorded footage of in drag racing history. Want an example? How about Bob Correll crashing the Kitecycle on a jump before the start of a 64 Funny Car show at Orange County International Raceway!" 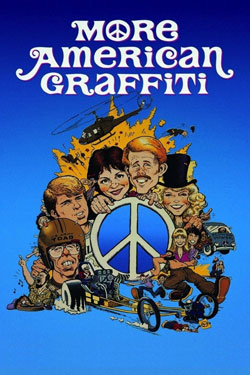 Synopsis: More American Graffiti is not a drag racing movie per se as the sequel to the original follows four plotlines, only one of which is devoted to drag racing, but it’s a good one. Former street-racing king John Milner (Paul LeMat) has gone straight, racing in Top Fuel at Fremont Raceway in Northern California with a home-built car and hoping to be signed as a driver for “the factory” team. The drag racing footage is really good and the cars look right. Dave Uyehara did some of the stunt driving. The awesome Steve Evans is behind the microphone as the announcer and fabled Fremont starter Chet Carter control the starting line.

The Dissolve.com said: "More American Graffiti plays like a drive-in theater simultaneously running a light-hearted drag-racing exploitation movie, a dark, satirical war comedy in the M*A*S*H vein, a swinging rock comedy about the wild and wooly counterculture, and a satirical comedy about the culture-clash collision between squares and long-haired hippie freaks. These disparate films don’t always come together organically, but that’s kind of the point: More American Graffiti is about the fracturing of a culture, and the simultaneously exciting and terrifying freedom of that splintering."

Watch all of the drag racing sequences on YouTube 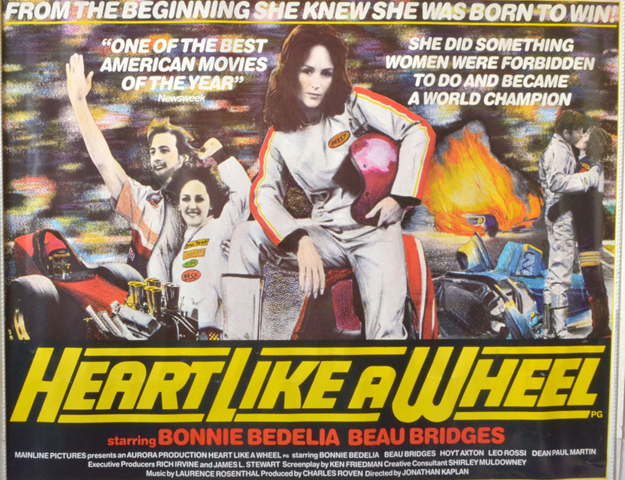 Synopsis: Directed by Jonathan Kaplan (whose 1988 film, The Accused, earned Jodie Foster her first Oscar for Best Actress), the film chronicles the career of the great Shirley Muldowney, from her early street racing days through gas dragsters and Funny Cars and ultimately to the Top Fuel championship. Lots of great vintage cars, great stunt driving by Tommy Ivo and Kelly Brown, and more. Bonnie Bedelia does a fine turn as our favorite drag racing heroine.

Variety said: “Heart Like a Wheel is a surprisingly fine biopic of Shirley Muldowney, the first professional female race car driver. What could have been a routine good ol' gal success story has been heightened into an emotionally involving, superbly made drama.” 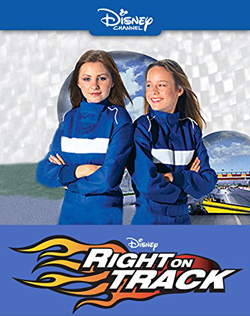 RIGHT ON TRACK (2003)
Synopsis: Right on Track is a Disney Channel original movie that chronicles the NHRA Jr. Drag Racing League careers of sisters Courtney and Erica Enders. The movie debuted on March 21, 2003, in the U.S. Starring Briana Shipley and then Beverley Mitchell as Erica and Brie Larson as Courtney, the film follows their journey and determination to make it in the sport in the face of resistance from some of their male peers and elders. The movie was filmed in Salt Lake City, where the real-life Enders sisters doubled for the actresses portraying them in the racing sequences.

Watch it on YouTube (payment required) or watch the free trailer 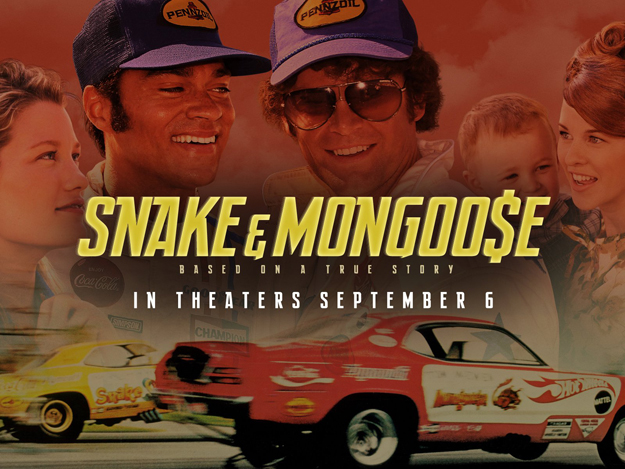 Synopsis: The story of drag racing’s greatest rivalry gets the Hollywood treatment, following the dynamic duo of Don “the Snake” Prudhomme and Tom “the Mongoose” McEwen through their early days, the famed partnership with Mattel Hot Wheels, and their hot-and-cold relationship through McEwen’s tragic but uplifting victory at the 1978 U.S. Nationals following the death of his son. The action footage is cool – Prudhomme even stunt-drove the Greer-Black-Prudhomme car at points – and is supplemented with actual race footage provided by NHRA, and the casting of Jesse Williams (Grey’s Anatomy) as Prudhomme and Richard Blake (Dragonball: Evolution) as McEwen works great.

The Hollywood Reporter said: “The legendary rivalry between racers Tom McEwen and Don Prudhomme is the subject of Snake & Mongoose, Wayne Holloway’s sports-themed film that should certainly appeal to, say, subscribers of Road & Track magazine. Featuring a plethora of archival footage from their races in the '60s and '70s, the bio-drama captures its milieu with an admirable accuracy and authenticity.”