Swamp Rat 14 rides again; the history of one of Top Fuel's most important cars 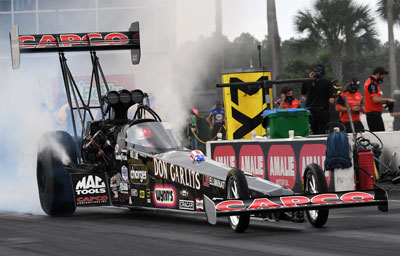 Even from 2,000 miles away, I could feel the electricity in the air when Steve Torrence made his first burnout in his Don Garlits Swamp Rat 14 tribute car at last weekend's Amalie Motor Oil NHRA Gatornationals. I was on the couch in Glendora, Calif., and Steve-o was burning rubber in Gainesville, Fla., but it still brought a tear to my eyes.

I've seen plenty of archival footage of "Big Daddy" driving SR14 during the 1971 season, but to witness it in crystal-clear 1080p high definition made me feel almost like I was in the grandstands five decades ago. Seeing that shiny black machine with the instantly recognizable Wynn's decal on its flanks was a real thrill — of course, the wings on both ends of the car were bigger and the cockpit deeper — and then seeing it win the Gatornationals (as Garlits himself did four times) put the cherry on top. And "Large Father," of course, was on hand to help the Torrences celebrate!

You can check out the story I wrote earlier this year about the Capco team's buildup of the car and all that went into it, or watch the final round here, but before you go there, let's talk about the importance of Swamp Rat 14. 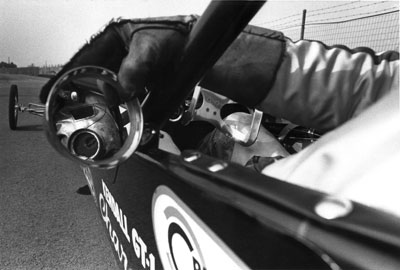 As you probably all know, it's Garlits' first rear-engined car (or, as Insider troublemaker Robert Nielsen always chides me, it's actually a mid-engine car), but, once he proved the design would work where others had failed, Top Fuel drivers have never looked back, unless it was through the side-mounted mirrors suddenly needed to monitor tire smoke on the burnouts; Garlits pioneered those as well.

The car was physically built in late 1970 but mentally assembled by Garlits from his bed at Pacific Coast Hospital in Long Beach, Calif., in the wake of the March 8, 1970, transmission explosion that cut the unlucky Swamp Rat 13 (and Garlits' right foot) in two on the starting line at Southern California's Lions Dragstrip. Between watching episodes of Star Trek with Tom McEwen, Garlits logically set out to primarily to prevent a similar future accident more than he did to revolutionize the class. 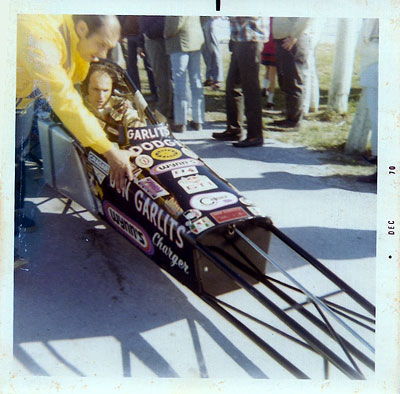 As previously acknowledged, it was far from the first Top Fueler with the engine behind the driver, but those cars were mostly spooky, evil-handling machines, and even Garlits had handling issues with his at first. In testing runs at Tampa Dragway in the winter of 1970, the car veered off the track several times (no guardrail there, thankfully) and it wasn't until Garlits cohort Connie Swingle changed the steering ratio from a traditional 6:1 slingshot ratio to a more manageable 10:1 that the car became reliably drivable and made some confidence-inspiring runs Dec. 27 at Sunshine Dragstrip in St. Petersburg, Fla. (Fifteen-year-old Wayne Nunnely shot the photo at right of the car — still with a "shorty" body — and shared his tale of being there with me a few years ago.)

Still, there was plenty of skepticism when Garlits officially debuted the car at Lions in early 1971 at the AHRA season opener, weeks before the NHRA Winternationals. The funny thing is that SR14 had to be disassembled to fit into the trailer it was sharing with Swamp Rat 15, the slingshot that Garlits had built (much to the disgust of wife Pat) in case the rear-engined car didn't work, and when he pulled into Sid Waterman's shop, the first thing everyone saw was the slingshot and had a good laugh at Garlits' Imagineering having come to a quick end. Then they saw SR14 hanging in the trailer rafters and had second thoughts.

After dropping off SR15 at Goodyear, who planned to use it as a display car, Garlits and Lemons headed the next day to Lions, where AHRA President Jim Tice asked to personally inspect the car and Lions manager C.J. Hart — who had witnessed Pat Foster's terrifying tumble in a rear-engine car in December 1969 — put Garlits on notice that if the car was ill-handling, he'd make Garlits park it. That fact that none of his scoffing competitors even wanted to be in the other lane for his first run wasn't encouraging either.

Garlits' first pass at Lions was straight and true, but he and crew chief T.C. Lemons barely had enough time to congratulate one another when John Collins came blazing through the Lions traps with a stuck throttle in John Bateman's Atlas Tools Funny Car and threw the entire engine out of the chassis and right at a horrified Garlits and Lemons. It missed them and SR14 by about 10 feet, but history could have changed that instant. Scary thought.

Garlits got to the final round and he admits thinking back to the previous year's final against Richard Tharp that had cost him so dearly. The result was that he was late against Gary Cochran's slingshot and lost the final. He also was runner-up again to "Mr. C" the following weekend at Orange County Int'l Raceway, but definitely had his head held high and his eyes set on glory heading to Pomona for the Winternationals.

With a full body now on the car, Garlits qualified just ninth in the 32-car Winternationals field, a tenth and a half behind Norm Wilcox's 6.70 in "Terrible Ted" Gotelli's Northern California-based entry. After a middling 6.85 win over Tommy Allen in round one — Henry Harrison's stunning 6.61 in the Ewell & Bell digger against Ronnie Martin was tops for the round, and the meet — Garlits had low e.t. of the next three rounds, running a pair of 6.72s to beat John Nichols in Jerry Dee Hagood's locally-based Spartan Charger.and Carl Olson, and then a 6.70 to beat Jim Dunn in the semifinals. 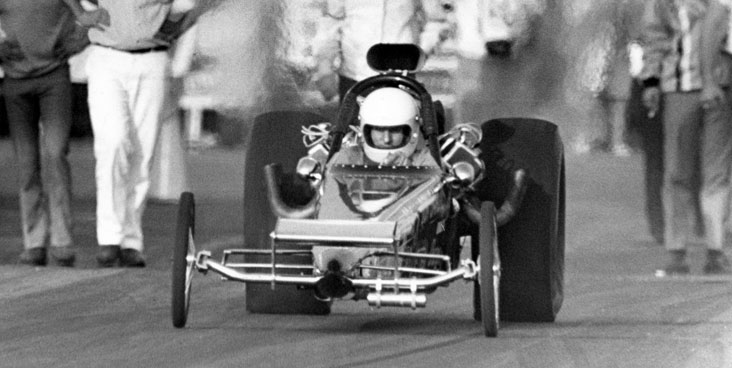 Garlits' final-round opponent, Kenny Safford in Larry Bowers' car, was unable to make the call after a clutch swap between rounds, and Garlits, perhaps loaded for bear to put an exclamation point on his win, smoked his way to a 7.03. 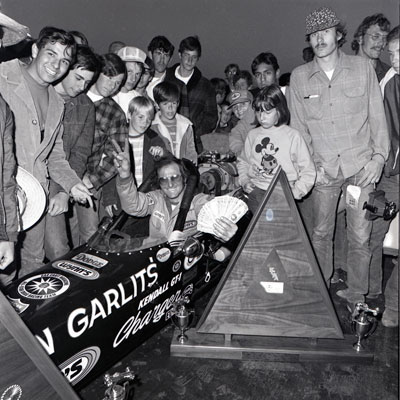 Anyone still on the fence about the car's potential dropped all premise of the doubt when Garlits won the March Meet in Bakersfield five weeks later. There again, Garlits started slow — he qualified just No. 14 at 6.79; Larry Dixon Sr. was low at 6.64 — but came on strong in eliminations. He beat his January slingshot nemesis, Cochran, in Carl Casper's Young American, with a 6.72 that was second only to Don Prudhomme's 6.69, then improved to a 6.68 in round two and a 6.67 in the quarterfinals to edge Prudhomme, who reportedly had Garlits covered until he banged the blower at the first light and slowed to a 6.72.  After a semifinal 6.71 over Watus Simpson (driving Vance Hunt's entry with an engine donated between rounds by Don Cook), Garlits squared off in the final with 1970 Supernationals champ Rick Ramsey and the front-engine California Charger of Keeling & Clayton. Ramsey outran Garlits by a ton — his 6.642 reset low e.t. of the meet — but "Big Daddy" got there first on a holeshot and became the first Top Fuel driver to win the fabled meet twice. 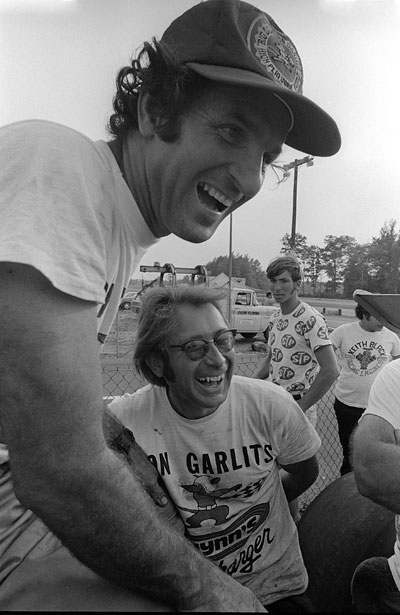 Garlits and Lemons qualified No. 1 at their hometown Gatornationals with a 6.53 — and from what I could tell by looking through photos and event coverage, they had the only rear-engine car on the grounds — but Garlits shut down too soon against eventual runner-up Sarge Arciero in round two and lost.

In the spring, Garlits added a wing (his first wing since Swamp Rat V-A in 1963) and won with it on the car at the NHRA Springnationals in Dallas, setting low e.t. and top speed and defeating John Wiebe's slingshot in the final.

"After Pomona, I flew home to Tampa [Fla.], sitting beside Jim Hall of Chaparral fame; we talked about the car moving around a little on slick tracks in the middle," Garlits told me. "Jim suggested a small wing to give me a little downforce without sacrificing a lot of drag. We got on that immediately. The small wing gave us .25-second better e.t. and a full 10 mph!" (Garlits also added the cowl-mounted Dixco tach represented on the Torrence car at about this same time.) 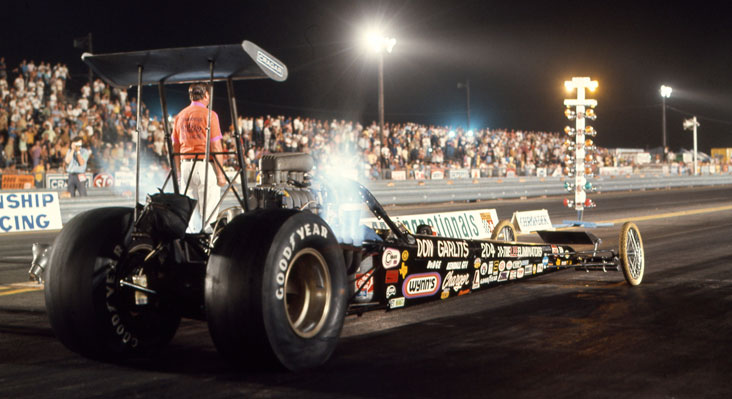 Garlits tells a great story about the Springnationals, about how he and T.C. had already loaded up the car and were heading out of the gate after posting a 6.50 for the No. 1 qualifying spot when they heard that Weibe was making another run (back then there were still no qualifying "sessions"; you could run until time ran out for the day). They parked the truck and listened as the loudspeakers gave them the horrible news: Weibe had just run 6.48 to steal the No. 1 spot. What did they do? What do you think they did? They drove back into the track, unloaded SR14, and, with the clock ticking down on qualifying, ran 6.44. Typical Garlits, right?

Still, the slingshot dragster design did not go silently into the night.

At the 1971 Summernationals in Englishtown, Arnie Behling became the second rear-engine national event winner in Bruce Dodd's Spirit and almost won again at the next event, the inaugural Grandnational in Quebec (which Garlits did not attend), but Pat Dakin (and a broken rear end) and his front-engined car stopped Behling in the final.

Steve Carbone and his front-engine car famously upset tire-smoking Garlits in the burndown in Indy, and Gerry Glenn and Bill Schultz, whose stretched front-engine car had run the quickest e.t. in history that summer with a 6.41 (until Garlits' 6.21 at Indy), won the World Finals (and the championship with it) by stopping Garlits in his tracks in the final round. 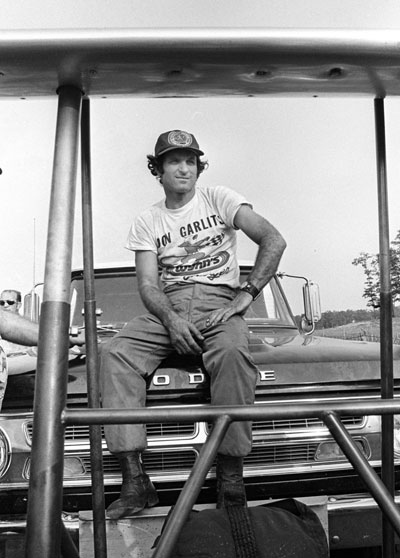 Even though Garlits had two wins and two runner-ups in the seven-event NHRA season, he still didn't win the championship because of the winner-take-all rule at the Finals. That had to be particularly galling to Garlits. Garlits did win the AHRA World Finals (and the championship) that year as well as the AHRA Summernationals.

The 1971 NHRA season officially ended when Hank Johnson beat Wiebe in an all-slingshot climax to the non-points Supernationals in Ontario, Calif., giving the slingshots a 5-3 season advantage over the rear engine cars, but the story would flip in 1972 as only Art Marshall would win again in a front-engine car [read The Slingshot's Last Hurrah] and Olson, Garlits, Chip Woodall, Jeb Allen, Gary Beck, Jim Walther, and Don Moody all scored with rear-engine cars.

With a new car (SR16) under construction, Garlits sold Swamp Rat 14 to Carl Casper to be displayed as a show car with the stipulation that it never be raced. Twenty-plus years later, Garlits traded Casper a new chassis to get SR 14 back. It was housed at the NHRA Museum for a decade before ending up back at Garlits' Swamp Rat shrine in Florida, where it sits today and provided the inspiration for Torrence's tribute car.

Hundreds of more articles like this can be found in the DRAGSTER INSIDER COLUMN ARCHIVE, including these three articles: