News and notes from the final day of eliminations from the Dodge NHRA Finals presented by Pennzoil at The Strip at Las Vegas Motor Speedway.
01 Nov 2020
NHRA National Dragster staff
Race coverage

News and notes from the final day of eliminations from the Dodge NHRA Finals presented by Pennzoil at The Strip at Las Vegas Motor Speedway (newest items at the top).

The stars seem to be lining up for another Torrence final-round showdown as No. 1 qualifier Billy took a second-round bye into the semifinals, where he will face Antron Brown, who hs lane choice. Newly recrowned world champ Steve Trrence will take on rookie of the year Justin Ashley after their respective victories over Troy Buff and Leaah Pruett.

Billy and Steve have met six times this year, including twice in the final round. Steve owns a 4-2 edge, including final-round victories against his dad in Gainesville and Dallas.

It's a safe bet that no one expected the Top Fuel and Pro Stock championships to be decided in the first round. Doug Kalitta's loss to Justin Ashley clinched the Top Fuel crown for Steve Torrence while matching holeshot losses by Jason Line and Jeg Coughlin Jr. helped make Erica Enders a four-time NHRA Pro Stock champ.

Scary moment in round one of Funny Car as Tim Wilkerson lost the handle on the Levi, Ray & Shoup Shelby and crossed the centerline behind J.R. Todd, who had pedaled and won the race. Wilkerson nearly got tangled up in the parachutes but was able to swerve back into his lane before contact.

Blake Alexander won his first-round race with Steve Densham but it came at a cost as the Head Contractors machine suffered a mechanical explosion that shredded the Mustang body. The team can pull out a backup body to compete in round two 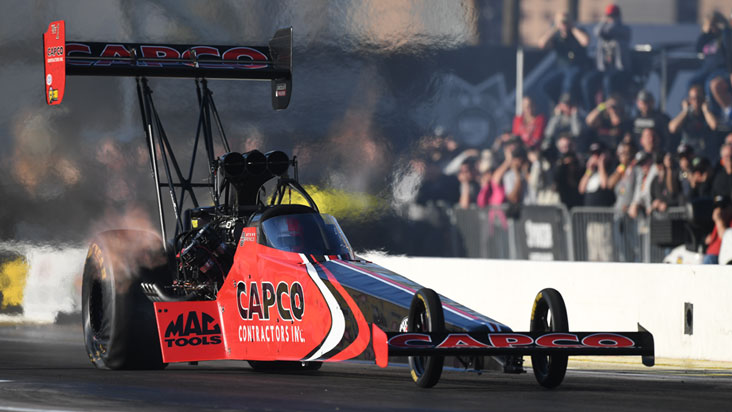 Here are the basic scenarios for Pro championships today:

Top Fuel: If Torrence wins his first-round race with Kebin Kinsley, he's the champ. If he loses, Doug Kalitta must win the race to pass him

Funny Car: Matt Hagan has a two-round lead on both Tommy Johnson Jr. and Jack Beckman. If Hagan reaches the final, he will be the champ, even if Johnson wins in the other lane (Beckman is on the same side of the ladder as him)

Pro Stock: Erica Enders has a two-round lead on both Jason Line and Jeg Coughlin. If she reaches the final, she will be the champ even if Line wins in the other lane. (Jeg is on the same side of the ladder as her)

Pro Stock Motorcycle: Matt Smith has a three-round lead on Eddie Krawiec and Scotty Pollacheck; Smith can clinch by reaching the semifinals

The scenario for the Pro Mod championship became a lot clearer after round one. Even though Khalid alBalooshi and Mike Janis both won their first-round races, so did points leader Brandon Snider and second-place Steve Jackson. Snider and Jackson will race in round two but, due to the 11-car ladder, the winner of their race gets a semifinal bye run, which will eliminate alBalooshi and Janis, and crown either Snider or Jackson as the 2020 E3 Spark Plugs Pro Mod Series presented by J&A Service champion 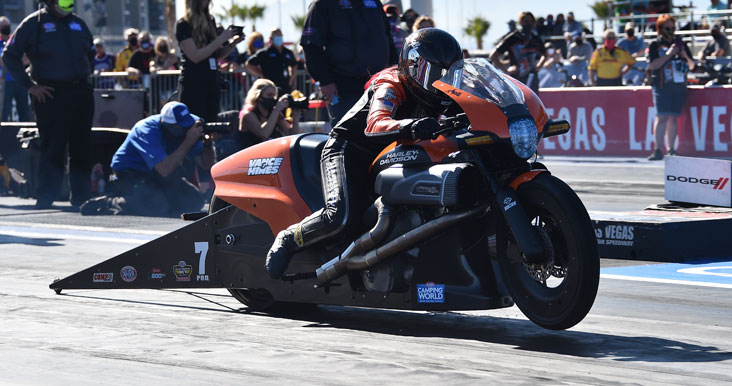 Angelle Sampey qualified No. 15 in the Pro Stock Motorcycle field it marked just the 46th time in her 262 race career that she’s been in the bottom half of the field and just the fourth time she’s been No. 15. Throughout her career, Sampey has also been one of NHRA’s most consistent qualifiers as she’s got just three DNQs on her scorecard since her debut in 1996.

The Dodge NHRA Finals presented by Pennzoil is the third of four major events held on consecutive weekends at The Strip at Las Vegas Motor Speedway. The busy fall schedule included the K&N Spring Fling E.T. Bracket event, the JEGS SPORTSnationals, the Dodge NHRA Finals and next week will be the Final Division 7 Lucas Oil Series event. For the record, the first NHRA divisional event in Las Vegas was held at Stardust Raceway in 1967.

Not only is Justin Lamb in contention for a sixth world championship in Stock Eliminator, but he’s also alive for a possible double at the Dodge NHRA Finals. Lamb, who lives in the Las Vegas suburb of Henderson, Nev., is down to the semifinals in both Stock and Super Stock. In order to win the Stock title, he’d need to reach the final round of this event, and also win next week’s Lucas Oil Series race, and the weather-delayed final rounds of the JEGS SPORTSnationals. 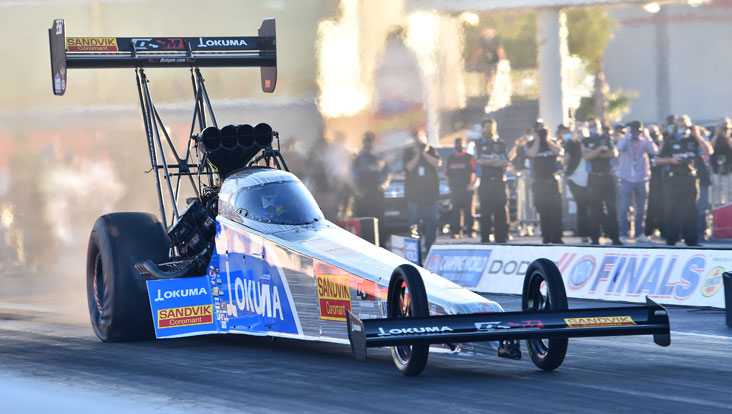 A week after winning in Houston, Tony Schumacher and his Okuma/Sandvik Coromant team struggled in qualifying in Las Vegas. The eight-time champ could muster only a best of 5.24 seconds and finished at the 11th quickest qualifier in a 14-car field. Said Schumacher, “We didn’t want to be one of the ones to struggle. People do struggle here and our first round there was a long wait period where I sat in the car and the track dried out a little bit. You try to push it and it spun the tires. I pedaled it and it had some cylinders out, and then it pushed a head gasket out on the second lap. I hate to race my teammate [Antron Brown] tomorrow and we don’t want to qualify 11th. We’re coming off such a great weekend last race. We went down the track every run. We’ll get it figured out and give it a good race.”

Aaron Strong’s appearance in Pro Stock was a surprise to most people since he didn’t appear on the official NHRA entry list that is typically finalized the Monday before each event. Elite team owner Richard Freeman was originally slated to drive, but gave up the seat of his Camaro to Strong, who made a name for himself during his brief time in Pro Stock when he won the 2016 Seattle race. Strong’s last appearance in the Pro Stock class came at the 2016 Auto Club NHRA Finals in Pomona. 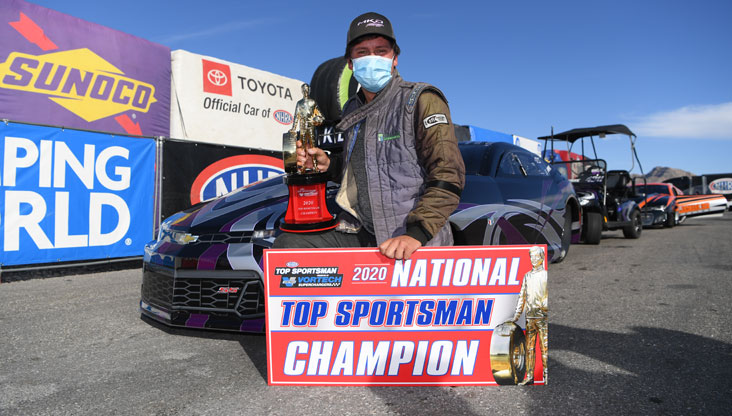 Darien Boesch added his name to the list of 2020 NHRA champions, claiming the crown in Top Sportsman presented by Vortech Superchargers when his only pursuer, Kyle Ratzloff, lost in the third round to Bryan Warr, breaking out with a 6.96 on his 6.99 dial. Boesch boosted his championship hopes by winning two South Central Division events earlier this season and then claimed a victory at the NHRA Southern Nationals, originally contested in Gainesville, but completed last weekend in Houston.

The remaining Lucas Oil Series Sportsman championships in Stock, Super Gas, and Top Dragster will be settled during next weekend’s Pacific Division event which will also be held in Las Vegas. Five-time champion Justin Lamb remained in contention for the title when he reached the final round of the Dodge NHRA Finals. The battle for the Super Gas crown remains wide open with Brian Preszler, Ed Olpin Jr., and Rick Cates still in contention. The Top Dragster battle will also be decided next week where Bradley Johnson will attempt to earn enough points to un-seat incoming leader Anthony Bertozzi.