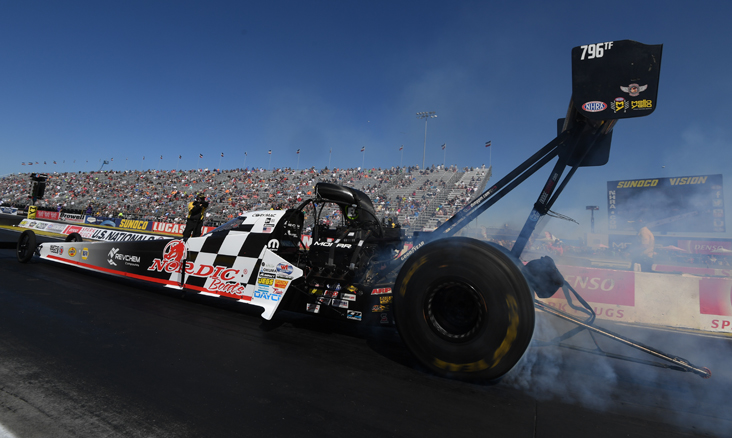 For a guy with 34 career wins, it was a long time between Sunday win lights for Cory McClenathan, who defeated Doug Foley in round one of Top Fuel in a close 3.761 to 3.768.

Even though it’s “only” been 17 races since he won a round, because of his part-time status, it’s been since the Auto Club NHRA Finals in 2012 since Cory Mac turned on the win lamp. At his hometrack in Pomona, McClenathan beat Shawn Langdon in the opening frame before losing to Bob Vandergriff Jr. In the races between then and now, he’s had 14 DNQs, so you can imagine his relief at taking his Nordic Boats/RevChem dragster to round two.

For the record, McClenathan hasn’t gotten to a semifinal since the Reading event in 2010, where he bested Dom Lagana, Langdon, and Antron Brown before falling to Larry Dixon in the final. 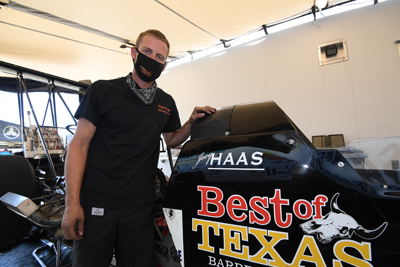 The odds against Joey Haas were certainly long in Top Fuel as the rookie was making his Top Fuel debuit on the sport's biggest stage and qualified No. 16 in Terry Totten's car, but he only had to look back to 1996 for inspiration as Indy's all-time Top Fuel king, 10-time winner Tony Schumacher, qualified No. 16 in his class debut in 1996 and reached the final round before losing to Cory McClenathan.

Unfortunately for Haas, he wasn't afforded the same fortune to Schumacher, as the former Nostlagia Top Fuel and Funny Car racer lost in round one to low qualifier Shawn Langdon's stout 3.72, but nonetheless left Indy with stories to tell and a future laid out before him. 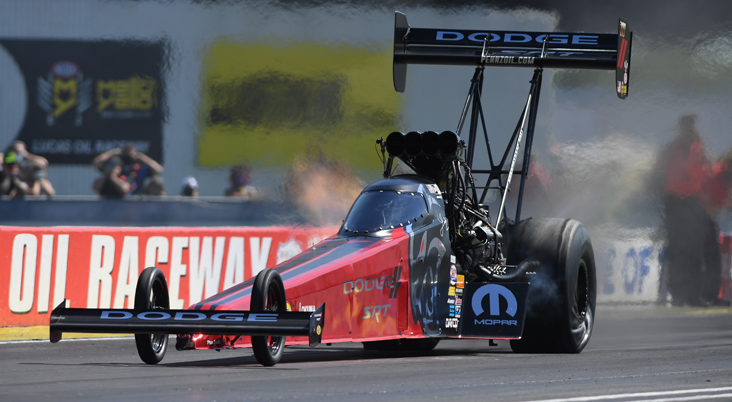 All eight first-round winners in Top Fuel ran in the 3.7-second zone with an average of 3.736 -- impressive because low e.t. of all qualifying was just 3.728 by Shawn Langdon.

Low e.t. of the meet was reset twice, first by Doug Kalitta at 3.707 in beating Pat Dakin and then by Leah Pruett -- who only qualified fo the field on her final qualifying pass -- with a 3.703 in besting 2018 Indy champ Terry McMillen. 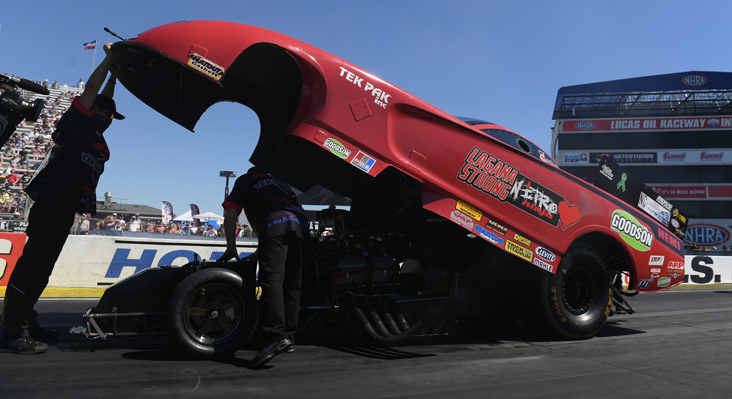 Dale Creasy Jr. pulled off one of the biggest upsets in recent Indy memory when he defeated low qualifier Tommy Johnson Jr. in the opening round of Funny Car. Johnson appeared to have the race in hand before his Reilly Hospital Dodge went silent before the finish line and Creasy eked by to win by just .005-second,

Creasy, a second-generation nitro racer from Beecher, Ill., known affectionately as “Peanut” to his friends, made his debut at the 1997 event in Brainerd and had collected just 15 round wins in the 20-plus years since, but he’s claimed some big wins over guys like John Force and Ron Capps in that count.

Creasy only has one second-round win to his credit, when he went to the semifinals of the 1999 Auto Club NHRA Finals after victories over Frank Pedregon and Capps before losing to Jerry Tolliver. 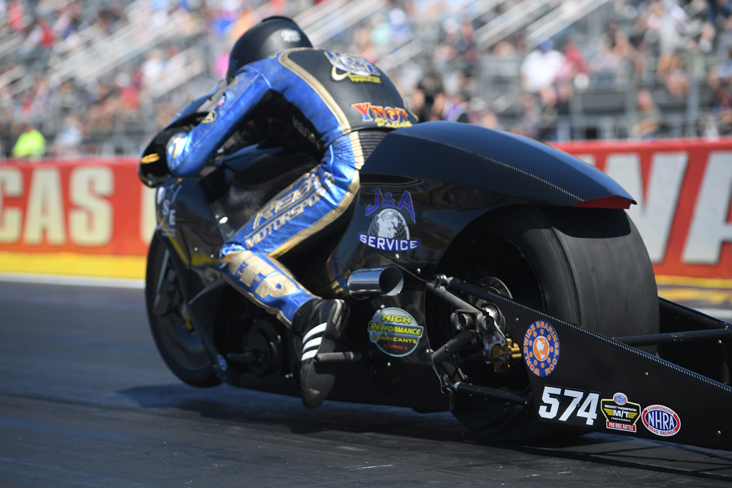 Cory Reed made his return to the Pro Stock Motorcycle class at Indy after a lengthy absence and qualified his EBR-bodied bike with a very competitive 6.881 run but NHRA fans likely won’t see Reed on a V-twin bike much longer since he and teammate, Joey Gladstone are preparing to make the switch to a Suzuki for the 2021 season. Reed and Gladstone will be racing a pair of Vance & Hines Suzuki entries that will utilized the new four-valve engine combination.

“This is an in-house program from Vance & Hines,” said Reed. “They are building the bikes and supplying the engines. It should be a turn-key deal and I think we’ll be very competitive.” 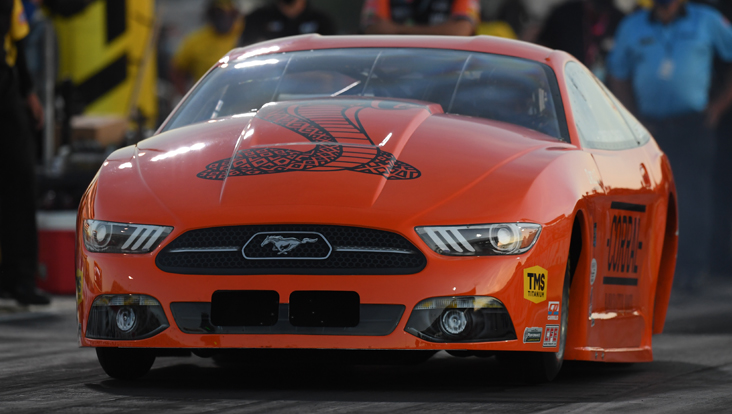 The Corral Boots Pro Stock team is normally a three-car effort with Fernando Cuadra Sr., joined by his sons Fernando Jr. and Cristian, but it was reduced to a two-cars at Indy after Fernando Jr. suffered a back injury that will require surgery. Fernando Jr. expects to be out of competition until sometime in 2021. In the meantime, Cuadra’s other son, David, raced in the Vortech Supercharges Top Sportsman class at Indy and may soon be fast-tracked into Pro Stock. On Saturday, Fernando Sr. made the field in the 13th spot with a 6.613 while Cristian missed the cut in his Mustang. 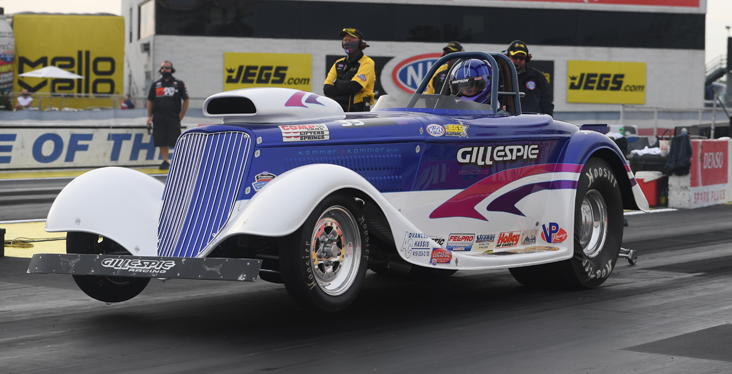 Perfect runs in drag racing are more rare than perfect games in Major League Baseball but we had one on Sunday morning at Indy when Super Gas racer Tim Gillespie tuned in an unbeatable performance in round three with a .000 reaction time and a 9.900 on the 9.90 Super Gas index. Gillespie obviously advanced to the fourth round but didn’t need to flirt with perfection since opponent Bill Jackson ended the race on the starting line with a red-light.

Two accidents 40 minutes apart marred the first round of Pro Mod eliminations, which ultimately was halted by a rainshower with two pairs remaining (and finished two hours and 20 minutes later). 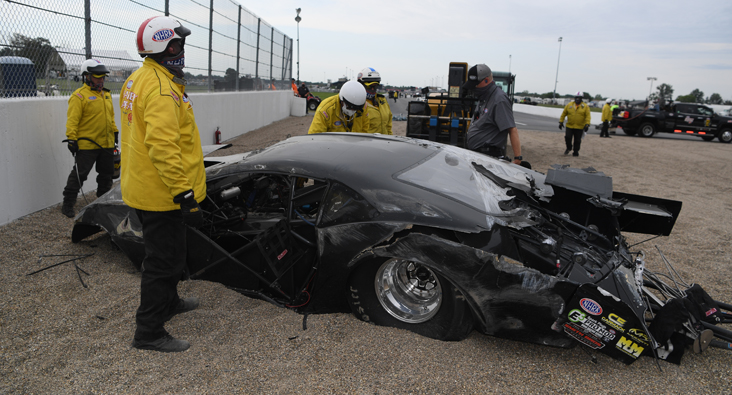 First Kris Thorne lost control of his Camaro after edging Jason Scruggs, the car making a right turn across the centerline past the finish line in front of Scruggs. The car impacted the right wall, went on its roof, and slid all the way to the sand trap where it barrel rolled once and landed back on all fours. Thorne exited under his own power.

After a 33-minute cleanup, eight minutes and three pairs later Steve Matusek lost the handle on his new Tequila Comisario Mustang at halftrack, crossed the centerline and slid sideways before digging in and rolling once before ending up on its roof and sliding to a stop in the shutdown area. Matusek also exited his wrecked racer under his own power.

You can see vioes of both crashes here. 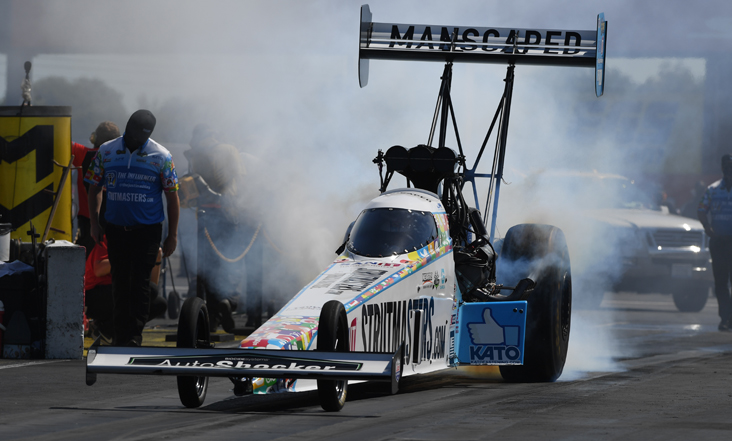 Heading into the Top Fuel finals, as has been the case every year since 2011, we have the potential for a first-time Indy Top Fuel winner with Justin Ashley and Leah Pruett still in action. Ashley, winner of Saturday’s delayed Lucas Oil NHRA Summernationals final, will take on 2013 winner Shawn Langdon while Pruett will face off with 2017 Indy champ Steve Torrence.

In fact, the last three Indy Top Fuel finals have been between two drivers each looking for a first U.S. Nationals win and six of the last seven finals at the event have crowned a first-time U.S. Nationals Top Fuel winner. 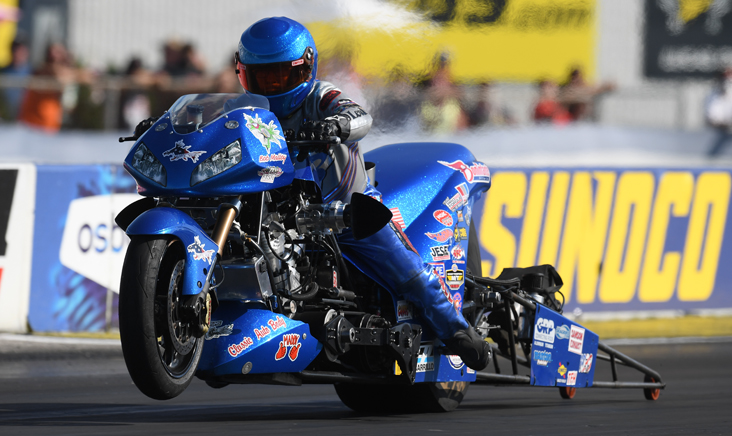 In the first round of Mickey Thompson Tires Top Fuel, Bob Malloy made the quickest pass in class history, a 6.096, to defeat Rickey House. The previous best pass was 6.101 by by Japan's Takeshi Shigematsu at the 2019 Amalie Motor Oil NHRA Gatornationals.

A day after shocking everyone with the first 5.0-second clocking in Top Alcohol Dragster history with a 5.097, Megan Meyer lowered the boom again, this time in the semifinals where her NGK-sponsored dragster roared to a 5.090 elapsed time to reach the final round, where she will face past Indy event champ Josh Hart.