Sunday News and Notes from the AAA Texas NHRA FallNationals 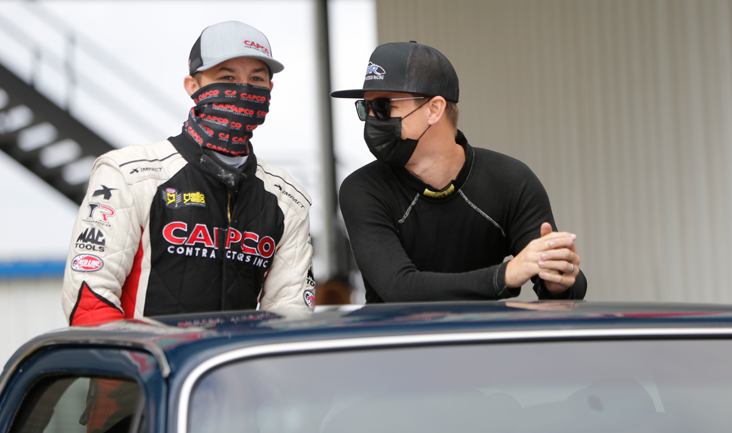 Texas Motorplex introduced a new pre-race wrinkle, sending the first-round combatants in all four classes parading down the return road in front of the crowd in the beds of some vintage Chevy trucks, a scenario that involved putting Steve Torrence and Cameron Ferre, who made national headlines last year for a post-run dust up that followed their first-round race at the Auto Club NHRA Finals.

Anyone looking for fireworks was disappointed as the two, who have patched up their differences, laughed and joked together on their ride, and their first-round pairing went handily to Torrence after Ferre's Terry Haddock Racing dragster faltered just off the line. Torrence will get a second-round bye into the semifinals due the the 14-car field.

Justin Ashley, the consensus vote to be this season’s rookie of the year as he sits fifth in points with a win already on his resumé, didn’t help his climb into the top four after being tagged with 25 penalty points for oildowns in the Strutmasters.com dragster, including 10 in qualifying and 15 for his major first-round ooops that delayed action for about a half-hour. It was third of the year, meaning a triple hit over the five points first-time violators get tagged. Asley won that round, defeating Lee Callaway to advance to round two, where he oiled the track again in losing to Doug Kaltta, subtracting another 15 and making for an overall 40-point penalty total. 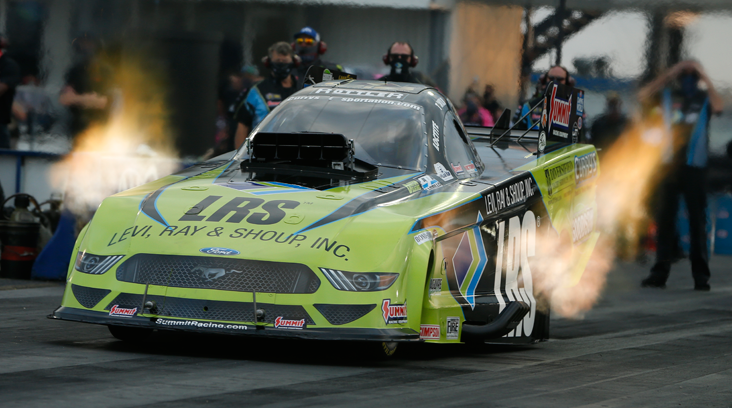 Tim Wilkerson looked good in Funny Car qualifying with back-to-back runs of 3.91 and 3.88 to qualify No. 3 for the third time this season, but his Q2 pass left the nose of the Levi Ray & Shoup Shelby damaged.

"There is a serious transition between the concrete and the asphalt out there, and bump-bump off goes the front lip of the racecar," said Wilkerson last night. "It stinks because we had a pretty good day, but then we came back and the whole front of the nose was folded off the body. That's going to make for a pretty long night."

Wilk's team got the damaged fixed and powered to a 3.93 in defeating Jack Waytt in round one. 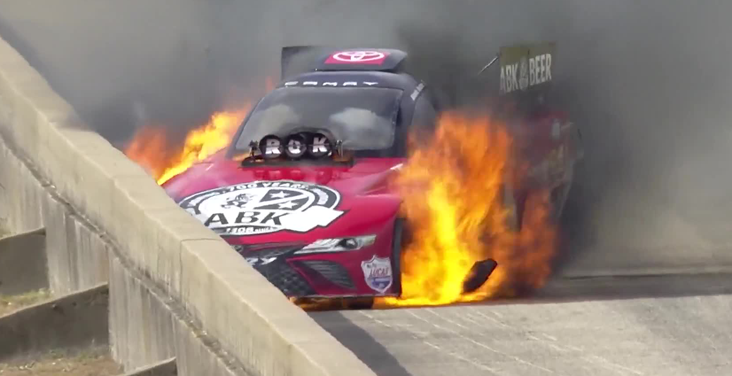 Alexis DeJoria rode out a major fire after winning her first-round Funny Car race with Gary Densham. DeJoria’s ROKit/ABK Beer Toyota lit up last the finish line long after she’d stepped off the throttle and made contact with the right guardwall as she rode the fiery machine to a stop and climbed out.

“I could tell it was running slower than it should have, but it’s raceday and even if a cylinder drops you don’t lift," she said. “You keep your foot in it until the very end. That’s what I did until I saw sparks and I knew Densham wasn’t next to me so I lifted right before the finish line and when I did the whole car filled with smoke and fire. It was so bad that I couldn’t see. I couldn’t breathe. I was just trying to stop the car, while taking little short breaths and try to get out of the car as fast as I could

“My first reaction was, ‘Did we win the round?’ and I was like ‘Ok, it’s on.’ My adrenaline was on level 11. After our last race, we learned our lesson and made sure that our back-up car was ready. Obviously, there were some little things we had to adjust. It’s a different chassis, the pedal is different, the seat’s different, so it was a little bit off to what I’m used to. We got ready and it just smoked the tires at the hit. We were hoping to go another round after everything that happened. These ROKiT Toyota guys hauled butt to get everything done in a timely manner. I really have to give them credit for that. They work so hard out here, and they’ve had to work extra hard these last two races. We’ve got two races left. Really, this whole season has been about building for next year – what season we’ve had so far. We have a good group. I love these guys. We’ll figure it out.” 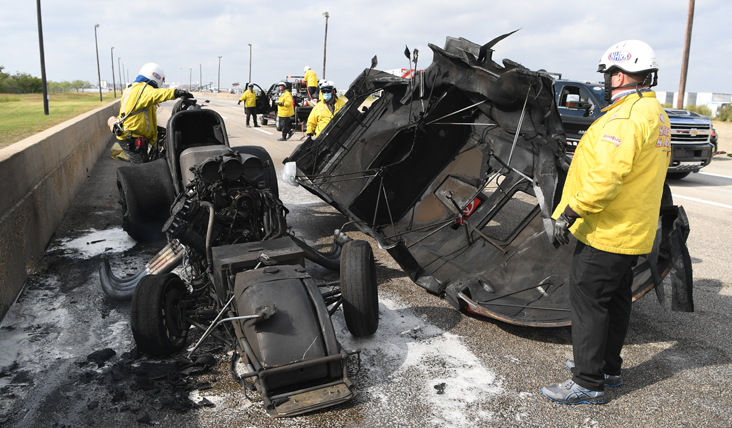 Her team immediately began preparing its backup car for their second-round date with Ron Capps.

It’s the second straight race where the team has been forced into action. Two weeks ago at the Mopar Express Lane NHRA Midwest Nationals, the team experienced a body-shedding blower explosion in round two but made the call for the semifinals. 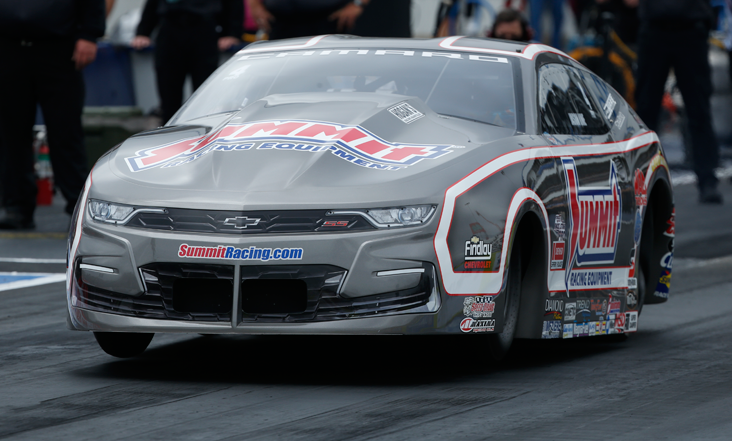 Summit Racing teammates Greg Anderson and Jason Line both narrowly escaped into the second round of Pro Stock, each winning their respective races against Kyle Kortesky and Cristian Cuadra by just .001-second.

Pro Stock Motorcycle low qualifier Matt Smith, who made three 200-mph passes Saturday en route to winning the rain-delayed final round from the NHRA Midwest Nationals, could not get his Denso EBR to fire for his first-round date with Michael Phillips, who rode off into the second round on a bye run. While Smith's wife, Angie, did advance to the second round, their teammate, Scotty pollacheck, also was headed to the trailer after being upset by Cory Reed.

Leah Pruett’s Top Fuel championship hopes took another hit as she lost in round two to Shawn Langdon, and both points leader Steve Torrence and second place Doug Kalitta advanced to the semifinals and could meet in the final round again.

Pruett is now in the odd position of rooting for Langdon in the next round. where he will face Torrence.

Don Schumacher Racing is in the hunt for a 12th consecutive Funny Car win on the NHRA tour – dating back to Matt Hagan’s win at this race last year – and almost had a lock on that after DSR drivers Hagan, Jack Beckman, and Ron Capps all advanced to the semifinals.

Jason Line will lose even more ground to Erica Enders after his second-round loss to Enders' Elite teammate, jeg Coughlin Jr. After losing his points lead to Enders in Saturday might's delayed Midwest Nationals final, Line will fall even further behindas Enders defeated low qualifier Deric Kramer and face off with Matt Hartford in the semifinals. Coughlin can claw his way back into the fight with a final-round showing. 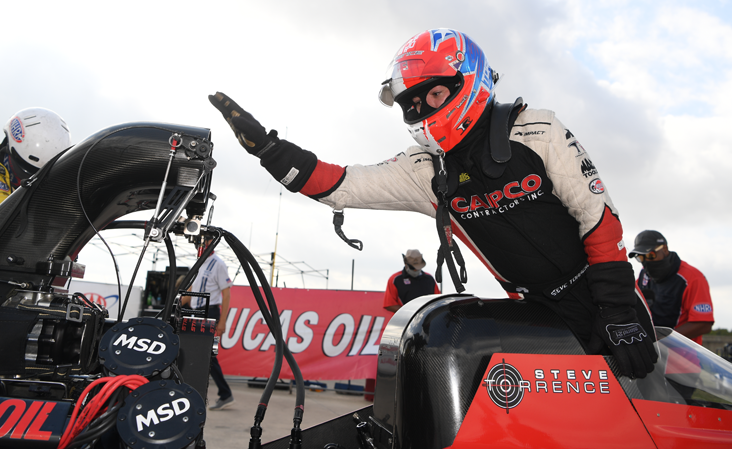 When Steve Torrence defeated Shawn Langdon in the semifinals, it assured that for the fifth time in the last six years, a Texas-based Torrence Capco Contractors Top Fuel dragster would be in the final of the AAA Texas NHRA FallNationals.

Steve was runner-up in 2015 and '16 (to Richie Crampton and Antron Brown, respectively), then won the 2018 race by defeating Terry McMillen in the final. Father Billy won the race last year, besting Jordan Vandergriff in the money round.

As soon as Doug Kalitta lit the e tires 300 feet into his semifinal with Billy Torrence, fists went up from "dem Capco boys" for two reasons: It guaranteed another Torrence family victory was assured, the third straight at the race, and that Steve-o got some distance on his closest points peruser, Kalitta.

Defending event champs Billy Torrence (Top Fuel), Matt Hagan (Funny Car), Greg Anderson (Pro Stock), and Jerry Savoie (Pro Stock Motorcycle) are all back in the final rounds again this year with a chance to double up at Texas Motorplex.