The streak: A deep dive into DSR's 11-race domination of Funny Car racing

It’s been more than a year since any Funny Car driver outside of the Don Schumacher Racing stable has lifted an NHRA Wally in triumph, a team win streak that reached an astounding 11 straight. All four DSR drivers -- Matt Hagan, Jack Beckman, Tommy Johnson Jr., and Ron Capps -– have each contributed at least two wins to the amazing streak.
17 Oct 2020
Phil Burgess, NHRA National Dragster Editor
Feature

It’s been more than a year since any Funny Car driver outside of the Don Schumacher Racing stable has lifted an NHRA Wally in triumph at an NHRA national event, a team win streak that reached an astounding 11 straight with Tommy Johnson Jr.’s victory at the Mopar Express Lane NHRA Midwest Nationals.

The last driver outside of the DSR camp to win a Funny Car event was Robert Hight, Oct. 14, 2019, at the NTK NHRA Carolina Nationals in North Carolina, and with Hight and the John Force Racing team on the sidelines this year, it’s certainly helped clear a path for DSR’s eight wins this season to keep its record unblemished.

Matt Hagan started the streak right here at Texas Motorplex when he defeated Bob Tasca III on Oct. 20, 2019, to win the FallNationals and the team hasn’t looked back since. All four drivers --- Matt Hagan, Jack Beckman, Tommy Johnson Jr., and Ron Capps -– have each contributed at least two wins to the amazing streak.

Here’s a scorecard at the overall team’s success during the win streak followed by a driver chart showing event wins, overall win-loss record, and records against fellow DSR drivers and other teams. Below those we'll examine the role each has played in the success over the past 12 months.

Worth noting: For all of the team's winner's-circle appearances, there have only been four all-DSR final rounds in the 11 events, and all have come since JFR parked its team after the Arizona Nationals.

Worth noting: Of the 85 round wins the team has accumulated since last year's FallNationals, 66 of them have come against non-DSR drivers, meaning they've done a pretty good job of not running into one another in elimination.

Hagan and the Dickie Venables-led Mopar team started the 11-race win streak in Dallas and won two of the three final events of the 2019 season, with their only loss that fall coming to Robert Hight in the semifinals of the Auto Club NHRA Finals.

After a semifinal loss to John Force at the 2020-opening Winternationals and a stunning first-round centerline cross while handily leading Jeff Diehl in Phoenix, Hagan poured it on with wins at two of the three Indy “comeback” events and most recently was runner-up to teammate Johnson in St. Louis.

In the six events since the 2020 Return to Racing in July, Hagan has yet to lose in the first round and while ‘s been susceptible to losing to non-teammates (four of his six 2020 losses came to non-DSR drivers), he’s run roughshod over his teammates with a 7-2 record this season, including a perfect 4-0 against Beckman, 2-1 against Capps, and 1-1 versus Johnson.

Venables also has tuned Hagan to four No. 1 qualifying berths in the 11 races, including three this season.

Beckman won the only fall 2019 race that Hagan did not, beating Robert Hight to win the Auto Club NHRA Finals, then returned to his Pomona track two months later and won the Winternationals to take the points lead that he would hold for the season’s first four races and after six of the eight until he lost the lead to Hagan in St. Louis.

The Dean Antonelli- and John Medlen tuned Infinite Hero Dodge is a perfect 15-0 against non-DSR drivers this year but, as mentioned above, has been pummeled by the Hagan/Venables combo (0-4, including a devastating first-round loss at the Indy 3 race) and is batting just .333 against the home team. With his 6-2 record against outsides last year and his perfect 15 this year, Beckman is a combined 21-2, or a 91.3% win average, so it’s clear where Beckman and team have been making their bones. 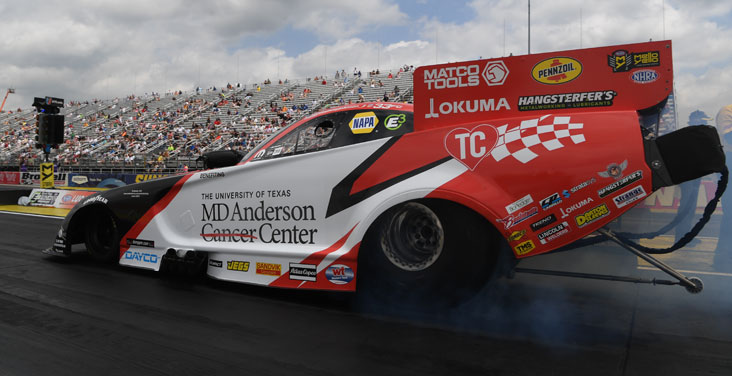 Johnson ended 2019 on downward trend, winning just two total rounds at the final three events and finished the year on a sour note with a disappointing first-round loss to J.R. Todd at the Auto Club NHRA Finals.

It only took the John Collins-led MD Anderson Cancer Center two events into 2020 to capture their first win, beating teammate Beckman in the final in Phoenix and they were runners-up behind Hagan at the Return to Racing event in Indy in early July. After a semifinal loss to Beckman at Indy 2, they won just two rounds over the next three events -and were upset in round one of the U.S. Nationals by part-timer Dale Creasy Jr. The team heads into the final three races with momentum after beating Hagan in the final of the Mopar Express Lane NHRA Midwest Nationals presented by Pennzoil two weeks ago.

Johnson, like Hagan, owns a winning record against his DSR teammates this year (5-2) and four of his six losses have come against non-teammates, the antithesis of Beckman’s record. Also like Hagan, the MD Anderson team has three No. 1 qualifying efforts to its credit this season. 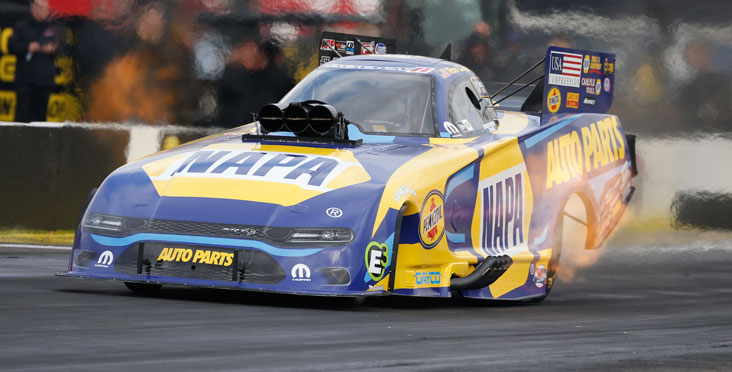 His teammates have been Capps’ Kryptonite during the win streak, owning him with a 1-8 record – the outlier being his semifinal win against Hagan en route to his win at the Gatornationals – but has a perfect 2020 record of 12-0 against non-teammates.

Capps, crew chief Rahn Tobler, and the NAPA Auto Parts Dodge don’t usually gun for the No. 1 spot (they have no pole positions since Reading last September) but get to the winner’s circle with heart and soul and consistency, the former evidenced with their gutty comeback win in Gainesville after having to switch cars before the final and the atter the steadiness to navigate the hot and tricky track en route to winning Indy 3.

With the Hagan, Beckman, and Johnson separated by less than two rounds with 12 rounds of racing remaining, that trio will likely produce this year's first Camping World NHRA Funny Car world champion. Even though he's seven rounds-plus out of the lead, no one is counting out Capps just yet.