The sunglasses and face coverings couldn’t hide the tears and the lumps in the throats of those gathered around Steve Torrence’s trailer as his crew unloaded his dragster in the pits of Lucas Oil Raceway at Indianapolis.

In place of his traditional red and black Capco Contractors paint scheme, the world championship car was wearing the body panels of the Lagana brothers’ Nitro Ninja dragster, a tribute to Capco crewmember Dom Lagana, who remains hospitalized in Indianapolis following a highway accident the night after Torrence won the Dodge NHRA Indy Nationals a month earlier.

The idea was already in Torrence’s mind long before the severe extent of Dom’s injuries became known, but became more concrete as the days and weeks went by and emotions skyrocketed.

“It was a lot better idea before I had to watch it happen,” said Torrence. “This has been tough on the family and our team because we’re all so tight here.

The original plan was to surprise Bobby, the assistant crew chief on Torrence’s car, by unveiling the car on the starting line ahead of the first qualifying session, but everyone was concerned about how all of their emotions might skyrocket. 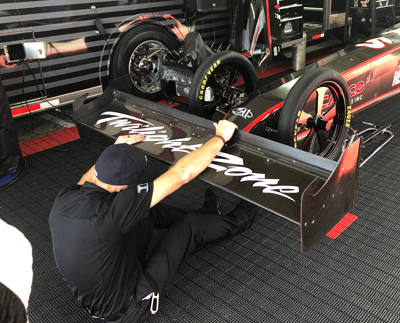 “When Bobby went with my dad to test his Super Comp car, I had a couple of my guys over to their shop to get the body panels off of their car,” he said. The car even has the Lagana’s front wing, which is emblazoned with the Twilight Zone moniker of their late father’s Funny Car.

Dom joined the Capco team in 2012, shortly after his brother came aboard, and worked with Jason McCulloch on Billy Torrence’s car, but also ran the Nitro Ninja occasionally when time permitted. The impact of Dom’s severe injuries and the Lagana brothers’ respect and love from the community is evident throughout the track, with #LaganaStrong t-shirts and face covering are worn throughout the pit area by fans and fellow racers alike.

“The amount of support has been unbelievable, but it shouldn’t surprise anyone because Dom and Bobby are two of the best guys at the racetrack,” said Torrence. “They’re genuinely good people, and Dom did the work of three people. He’s that good.”