Southern California doorslammer legend Bob Lambeck, whose son Doug has been in a three-race tear in Comp, was in on the ground floor of Pro Stock in 1970 and remembers those early first days of the class.
13 Mar 2020
Phil Burgess, NHRA National Dragster Editor
DRAGSTER Insider 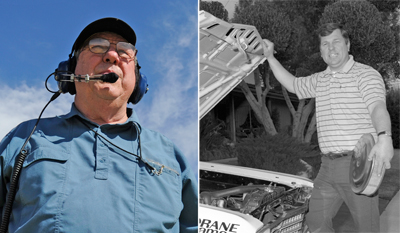 For next week’s issue of NHRA National Dragster, I wrote a feature on Comp racer Doug Lambeck, who’s been on a tear the last three events, with wins at the 2019 Finals and 2020 Winternationals and a runner-up at the NHRA Arizona Nationals.

Of course, no story about Doug Lambeck exists without mention of his father, Bob, who’s been racing in NHRA competition for six decades, beginning with a ’62 Pontiac Stocker that won class at the 1963 Winternationals. Bob went on to win the Winternationals event two decades later and also won Stock world championships with driver Tim Ekstrand in 1975 and 1985, but most people don’t realize or remember that Lambeck was also one of the founding fathers of Pro Stock.

Lambeck’s path to Pro Stock, as it was with every early hero of the class –- Bill Jenkins, Ronnie Sox, Don Nicholson, Dick Landy, et al –- began in Super Stock in the late 1960s.

By 1967, Lambeck was driving a record-crushing, four-speed G/Stock ’57 Chevy and, after winning the Division 7 championship, his performance at the World Finals in Tulsa, Okla., caught the eye of Jerry Gross, a prominent figure in Chrysler’s racing programs, and he soon ended up as a team driver for Mopar legend Landy in a new 440-powered SS/EA ’68 Dart.

Lambeck started 1968 with his ’57 Chevy and won class at the Winternationals – defeating future fellow Pro Stock hero Frank Iaconio in the final – before getting the Dart from Landy, who ran it first at Pomona. 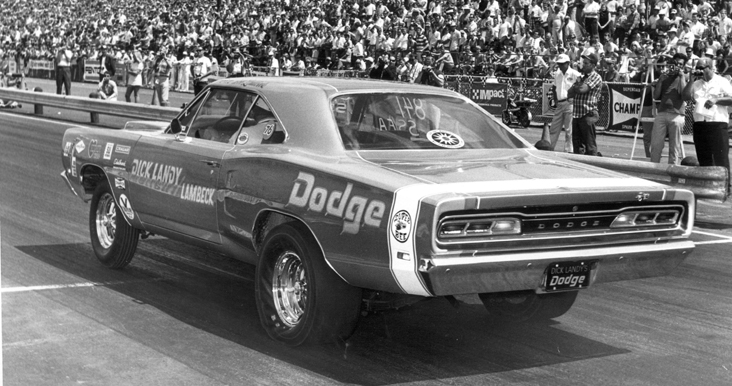 Even with an automatic transmission and a move to Super Stock he won the Division 7 title again, accumulating more points than any other champion in any class in any division. He also won the championship the following year in a SS/EA Dodge Super Bee, but was runner-up to Ed Terry’s Cobra Jet by 100 points

Landy and Lambeck both moved to Pro Stock in its 1970 debut season. Even though he had shown great proficiency with his manually-shifted ’57, they opted to start him with a Clutchflite automatic in Pomona. “They didn’t think I could handle the stick,” he remembers. “What a piece of junk that thing was. Landy told me, ‘Take it out and throw it away. I’ll give you a four-speed.”

Even though Lambeck didn’t win a national event with his new Dart, he did win the Division 6 Pro Stock championships and also the Division 7 Super Stock title in a Hemi-powered Charger.

At the end of 1970, Lambeck left the Landy camp to forge his own path, driving a Dodge Dart. In 1972, he switched to a Duster built by West Coast favorite Ron Butler, who had built similar cars for Bill Bagshaw and Butch Leal.

By 1973, Lenco planetary transmissions had largely supplanted the manual four-speed, stripping drivers like Sox, Nicholson, and Landy of the advantage they held by their gift-shifting expertise.

“I ran the 1973 AHRA Winternationals at Beeline [Dragway, outside of Phoenix] and made it to the semifinals and beat Gapp & Rousch with my four-speed but only because they couldn’t back up [after their burnout],” Lambeck recalled. “They made a U-turn on the track and tried to stage, but they got kicked out. When we got to Pomona, there were a lot of Lencos.

During the first weekend of the rain-slowed Winternationals, Lenco-equipped cars took three of the top four positions, led by Nicholson’s 9.41 with his Ford Pinto, Melvin Yow in Billy Stepp’s Dodge, and Roush’s Pinto took the No. 3 and 4 spots, respectively. Only No. 2 qualifier Bill Jenkins, who ran a 9.42 with his ’72 Vega, had a manually shifted four-speed. By weekend two, Don Carlton ran a sensational 9.22, at the time the quickest run ever recorded by an NHRA-legal Pro Stocker in Ted Spehar’s Lenco-equipped Motown Missile Dodge to lead the way. By the end of the event, virtually every Pro Stock team had switched to a planetary-type transmission or was making plans to do so.

“Jack Jones called me up and told me that I needed a Lenco, but they were $2,700 and I had three four-speeds in the trailer,” he recalled. “Some of the guys were still having reliability issues with the Lencos, so I decided I would stay with my four-speed until they get it worked out. Two weeks later I went to Bakersfield and I raced Larry Huff, who had a Lenco, on a time trial and he drove away from me; every gear change he’d picked up half a car. The next day I ordered one and picked it up later that week. I went up to Fremont and was the No. 1 qualifier but I have to admit that the first run I made with the Lenco, out of habit, I pushed in the clutch when I shifted it."

Lambeck’s Pro Stock driving career ended not long after following a crash at Orange County Int’l Raceway where one could say that the Lenco ended that part of his career. 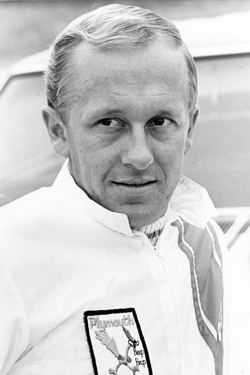 “Everybody was there – Jenkins, Landy, Sox …. everybody – and I was the No. 1 qualifier. What I had learned to do was put my [left] foot back underneath the seat when I left the line so I wouldn’t push in the clutch on each shift. I'd pull my leg all way back to the seat but when I crashed it, my foot under the seat broke my leg.”

The emergence of the Lenco has also has been largely blamed for the downfall of the Sox & Martin team, which won nine of the first 15 NHRA Pro Stock races in 1970-71 with Sox at the wheel thanks to the wheelwork of “Mr. Four-Speed,” and Lambeck agrees.

“When Sox got the Lenco, he wasn't as competitive as it used to because he was the best,” opined Lambeck, “but now everybody became a good driver. Ronnie Sox was who I consider the best four-speed driver but I would not bet money against a guy named Butch Leal; he was good as Ronnie Sox ever was. ‘Dyno’ [Nicholson] was a good four-speed driver, but he wasn’t as good as Sox; Sox just kicked ass.”

Although Lambeck’s Pro Stock driving career ended with the crash, a few years later he would be part of one of the decade’s biggest upsets when Randy Humphrey drove their Hemi-powered Plymouth Volare to victory at the 1979 Mile-High Nationals to end Bob Glidden’s amazing winning streak. Glidden had won the previous nine national events -– beginning at the 1978 Summernationals through the 1979 Springnationals -- and had been to the final round at 17 straight races (beginning at the 1977 Montreal event), winning 14 of them.

When Glidden led all Denver qualifiers with a 9.08 that easily outdistancing No. 2 qualifier Sonny Bryant's 9.20 and No. 3 Humphrey’s 9.21, it looked like Glidden was well on his way to his 10th straight win. Glidden then put away Nicholson in the first round with a 9.12 while Humphrey could muster only a 9.35 in beating (of all people) Sox, on a holeshot, 9.355 to 9.351. 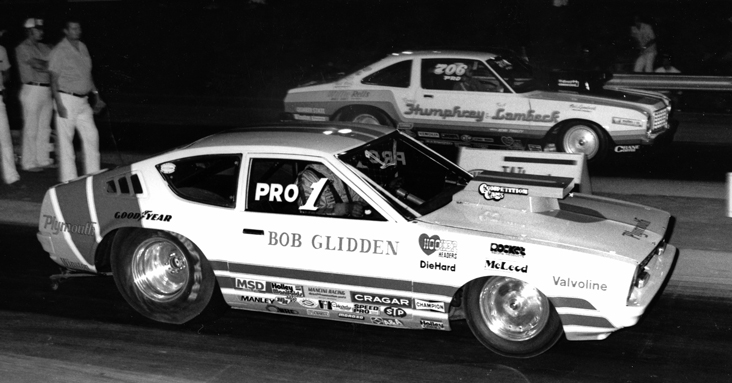 Although Humphrey did step up to a 9.25 against Glidden, the race was already over, and Glidden clicked it off early, so we’ll never know how good of a run he wasted.

So why did Glidden red-light against an obviously over-matched foe? Speculation was that Glidden’s Arrow just hooked up too good, but observers also noted that he had red-lighted on a qualifying pass, too. Draw your own conclusion.

Bryant provided Humphrey’s final-round hurdle and he, too, was appearing in his first NHRA Pro Stock final round after beating fellow big-block Camaro campaigner Kevin Rotty in the semi’s, 9.28 to 9.32. 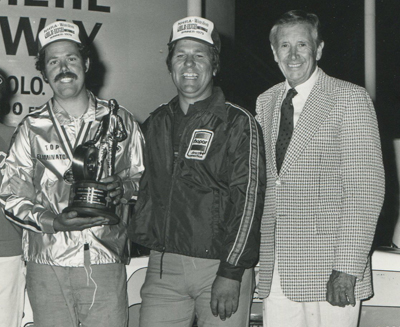 Humphrey sealed the win on a 9.27to 9.31 decision and became the last Dodge Hemi-powered Pro Stock racer to win an NHRA national event for more than 20 years until Mark Osborne won the Seattle event in 2001.

It’s also interesting to note that Humphrey and Lambeck had also been the ones to take away Bob Glidden’s national record earlier that year, uncorking an 8.46 in Fremont to better the 8.48 that Glidden had run at the 1979 Gatornationals. Humphrey held the record until September when Glidden got it back with an 8.43.

Thanks for reading. Stay safe out there.