If not for his talented and experienced right foot, Shawn Langdon wouldn’t be staring at his third Denso Spark Plugs NHRA U.S. Nationals trophy and his Kalitta Motorsports organization would not be basking in the glow of a fourth straight victory at The Big Go.
08 Sep 2020
Phil Burgess, NHRA National Dragster Editor
Feature

If not for his talented and experienced right foot, Shawn Langdon wouldn’t be staring at his third Denso Spark Plugs NHRA U.S. Nationals trophy and his Kalitta Motorsports organization would not be basking in the glow of a fourth straight victory at The Big Go.

A round before he defeated Leah Pruett in the final round, Langdon’s DHL dragster was paired with rookie Justin Ashley and the Strutmasters.com entry. At the green, both cars lost traction immediately and both drivers furiously pedaled their throttles trying to regain control.

Langdon, with years and hundreds of runs beneath his safety belts, put that experience to work and outdueled the first-tear racer to light the win light and advance to the final round.

Langdon’s up in smoke run surprised everyone considering that he had qualified and had made it down the track with low – to mid-3.7-second runs on four of his five previous runs, counting qualifying, where he had grabbed the pole with a 3.728.

Unbeknownst to Langdon, as he was staging his yellow rail, a supercharger lubrication line broke, spraying the rear tires with lube.

“I noticed when we went to pre-stage that they were wiping something up. I thought it might just be an overflow of the fuel tank,” said Langdon. “I saw something, and they kept mopping it up, but I didn’t see any of my guys panicking. Apparently, they were behind me, but I couldn’t see anything. I wasn’t really prepared for it because the car’s been good all weekend, so it caught me off guard. I hit the gas and it struggled. I couldn’t get it to hook back up and I got sideways. A couple of times I thought I was about to wreck, but those are the races why we do this. This is Indy and I’m here to win races, so whatever it takes.

“When I hit the gas initially, I saw his car shoot out on me and I was letting my car calm down a little bit because it was still smoking the tires. I was reaching over to grab the brake handle to help slow wheel speed down and then I saw him (Ashley) getting in trouble. At that point was when I started to get back on the gas. It was going for a second and I think it dropped a cylinder and it went back up in smoke. At that time, I was waiting for it to calm down again and I could hear him having trouble as he was still trying to get it to recover. I’m doing anything I can. Luckily, I was able to manage it someway, somehow. It was an exciting one for sure.”

“That was the first time I ever had any kind of pedalfest in Top Fuel,” said Ashley. “Immediately it went up into smoke and I slapped the throttle but I just couldn’t get it to hook up completely. The car got a little sideways and at that point I pretty much lifted. I was getting ready to call it a day but I still didn’t see Shawn there on the other side so I thought I would slap it one more time. I got it across the finish line eventually but Shawn got me that time. It was a good race. If we weren’t able to come out with a win I am glad we were able to put on a show for the fans.”

Langdon and DHL team recovered from that misstep, as Langdon streaked off the line with a jaw-dropping .015 reaction time and pounded out a flawless 3.705 in the final round to defeat Pruett. It was Langdon’s third Indy win, including a Top Fuel Wally in 2013 and a victory in Super Gas in 2010. 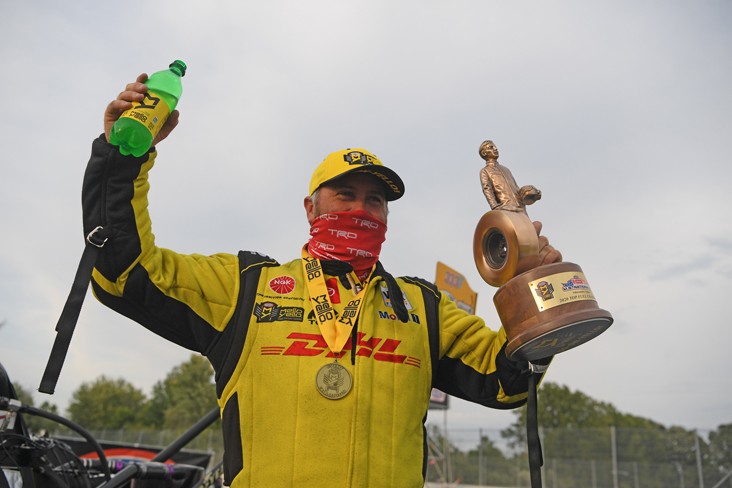 Langdon’s win extended the streak started by Funny Car teammate J.R. Todd, who won Funny Car at the event in 2017 and 2018 and continued last year when Doug Kalitta won the event for the first time in his great career.

The win, his 15th in Top Fuel, moved Langdon up to No. 5 in the Mello Yello point standings

“[This win] definitely ranks toward the top,” said Langdon. “When Connie hired me in 2017 to drive his car, we made a couple of late-round finishes and had a couple of runner-up finishes. So when I went to Funny Car (in 2018), my only regret was I wasn’t able to get a win with Connie Kalitta as my crew chief. Going to Funny Car, I didn’t know if I’d ever get the opportunity to. So, when the opportunity presented itself to get back into a dragster, that was one of the reasons. I always looked up to Connie as a kid. I watched him for years and I still look up to him. He’s an awesome team owner and he’s an awesome crew chief. We had a great conversation after Q1 when I almost messed up the run that put us on the pole when I almost double-stepped it. We talked about a lot of things and I took some great advice from him. Then in the semis when I pedaled it there were some things I thought I could have done better and some things that he told me that he’s experienced in the past that he felt could make me better. Those are some things why I love driving for him. I’m very, very happy to get a win with him, and winning in Indy makes it all that much sweeter.”