Eleven times Scotty Pollacheck staged with a chance to win his first Pro Stock Motorcycle race and all 11 times; he came away empty-handed. Five of those finals came in four-wide events at zMax Dragway and the other six were in conventional two-wide races but the end result was always the same; the other guy left holding the Wally.

He probably wouldn’t agree but after a while, Pollacheck’s plight almost became comical as he endured one heartbreaking loss after another. At times, watching Pollacheck race in a final was akin to watching Wile e Coyote chase the Road Runner to the edge of a cliff; you just knew something bad was inevitably going to happen. Case in point the 2013 Norwalk race where Pollacheck beat Harley-Davidson teammates Andrew Hines and Eddie Krawiec to reach his second-ever final. He had lane choice against current teammate Matt Smith and the stage seemed to be set for a win. Smith quickly ended those hopes when he left first by eight-hundredths of a second and rolled to an easy victory.

Then, at the end of the 2013 season, Pollacheck made it to another final at the Auto Club Finals in Pomona. This time, things should have been different since Pollacheck had qualified No. 4 and had the quickest bike in the first three elimination rounds. He also had lane choice against Eddie Krawiec in the final. What could go wrong? After identical reaction times, Pollacheck’s bike slowed dramatically and Krawiec got the win.

Pollacheck’s next final at the 2014 Gainesville season-opener would surely be different. Racing Steve Johnson, he once again brought the quicker bike to the starting line and even hedged his bet with an almost-perfect .009 reaction time. Again, Pollacheck’s bike let him down and Johnson got the win.

And then there are the five Charlotte finals. The Four-Wide format annually produces some of the wackiest and most unpredictable racing of the season so surely at least one of them could have fallen Pollacheck’s way. Nope, not in 2013, 2014, 2015, 2017 or 2018. 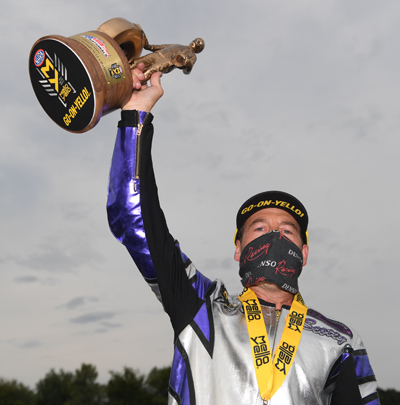 It’s hard to comprehend how a rider like Pollacheck, with so much talent, so much promise, and history of landing competitive rides, could go 0-for-11 before finally winning his first event, in the 132nd start of his career. Most riders would have quit long before it got to that stage, but Pollacheck isn’t a quitter. Nor is he one to complain, so he rarely uttered a peep about his predicament.

“What can you do about it except keep trying,” he says. “I never felt like I wasn’t good enough to win a race. I just kept coming up a little short or having bad luck at the wrong time. Yeah, it got frustrating at times, especially when I felt like I had a really good bike, but I didn’t dwell on it.”

If Pollacheck’s long road to a first win reads like an endless romance novel, we can skip to the final chapter where he finally finds what he’s looking for and lives happily ever after. It took 132 starts, but Pollacheck has his first Pro Stock Motorcycle win, and he did it on NHRA’s biggest stage at the Denso NHRA U.S. Nationals.  and he did so with a dominant performance that included his first 200-mph run.

Even after he red-lighted by a thousandth of a second in Saturday’s Mickey Thompson Pro Bike Battle, Pollacheck ultimately had faith that Sunday at Indy would finally be his day.

“Honestly, I wasn’t even that upset about losing the [Pro Bike Battle] final because I knew we had such a good bike and we had another opportunity to win on Sunday,” Pollacheck said. “Then, running over 200 was a bonus because we didn’t expect that.

“When we came in here, we joked about running the table and we nearly did it,” Pollacheck said. “We qualified No. 1, ran over 200-mph, and we won the race. That’s a pretty good weekend. Honestly, my bike was flawless all weekend. It has been good all year but with all the races we’ve missed due to COVID-19, we haven’t had many opportunities to show it. It’s been a long time coming but I’m glad the wait is finally over.”

The U.S. Nationals has a history of producing first-time Pro Stock Motorcycle winners. The late John Meyers, Jim Bernard, Rick Ward, Reggie Showers, and LE Tonglet all won their first titles in Indy, and Meyers and Tonglet went on to win world championships. That’s something for Pollacheck to ponder as he’s now in the points lead for the first time in his career with just five events remaining this season.

“I never really gave that much thought but it’s something to think about now,” said Pollacheck. “We’ve got a great bike and a lot of momentum. We just need to keep doing what we’re doing. I honestly try not to think too far ahead, but it’s definitely a nice feeling to go to the races knowing you’ve got a shot to win.”