NHRA Camping World Top Fuel championship contender Leah Pruett entered the Mopar Express Lane NHRA Midwest Nationals presented by Pennzoil in second place in the points standings, but suffered a  setback in round two when her dragster crashed after an apparent chassis failure, sending her Mopar dragster soaring through the air. Pruett walked away with minor injuries and is preparing to continue her quest for the season championship at the AAA Texas NHRA FallNationals next weekend at Texas Motorplex.

In this interview with NHRA National Dragster Editor Phil Burgess, Pruett recounts in detail the accident and also talks about her Top Fuel championship hopes and Dodge Factory Stock entry.

ND: That was quite a nasty tumble; how are you feeling?

Pruett: I would say [Wednesday] was hopefully the worst of it. I’ve got a sprained lower back and some bruises. I'll have some physical therapy to expedite the recovery process for my back but that's all good. I couldn’t ask for a better result really.

Pruett: My bruises are only really from legs hitting each other and on my left foot from the clutch pedal; it's so incredible how well everything worked. I was thinking about it today and, as much as the technology and safety features are there, it really takes a very diligent group of people to make sure that they are constantly right, and constantly working. Human mentality is ‘out of sight out of mind,’ and when you never have an issue, to keep safety at the forefront all of the time, even when it's never in your view, that's what's most impressive to me. I’m very much as impressed with the people as I am with the equipment 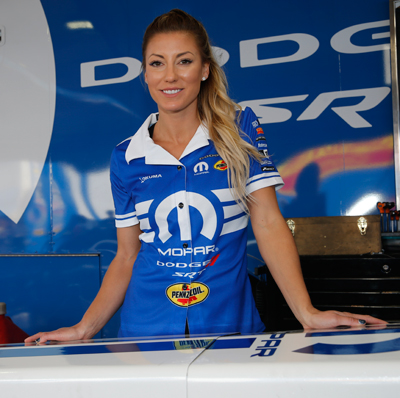 ND: This is your first major accident, right?

Pruett: The only other incident I’ve had was in 2011, when I won my first ever round win in any national event, and I put Pro Mod into the beach [sand trap] in Englishtown.

ND: Some drivers go a whole career without a wreck, but it has to always be on your mind, right?

Pruett: I was never naïve to think a crash wouldn’t happen to me. I've been very aware but never dwelled on it. If I'm in the car and I'm thinking, ‘Man, that track looks tricky out there,’ or somebody crashes ahead of you and you go, ‘Man that could be me,’ I’ll let myself think about those thoughts and then I'll make sure that I end my conversation with myself with a boatload of confidence and a boatload of positivity, so I’m never racing on a negative mindset.

ND: What do you remember about the accident?

Pruett: Just about everything. I could talk for hours about it.

Pruett: We were square and straight in the right lane and I take off and I thought I had a pretty good takeoff but it started to move left, and it never moves left early. By the time I got 100, 150 feet out, I was guiding it right and immediately it shoots me left and I remember thinking, ‘This is a very odd run, but it’s eliminations and let's get going.’ It's still got all the power, but the drivability was the first inkling that something might be off.

At first I thought it might be a [dropped] cylinder, but we hardly ever put cylinders out early, so then, as I'm at about 400 feet or so, I remember my view of the track being distorted and disappearing. The very first thing that I thought was like it [my Factory Stock Showdown car]: you pull these big wheelies and the horizon disappears. I remember thinking, ‘This should not be happening,’ and that's when I lifted.

The car was in an exaggerated bow but still intact. I am proud of the fact that I’m able to be one with the car and know what it's doing and, looking at the photos, they shows that just as the car starts to bow up, I'm getting out of the throttle.

Then  remember seeing the scoreboards, seeing the sky, and at that point thinking, ‘This is happening,’ but I immediately knew there was nothing that I could do at that point except be along for the ride, because once you see the scoreboards and clouds and the sky, it’s over. It was the quietest time because you're no longer on earth and the engine is still running but you're in the canopy, and then I did feel myself changing direction and I thought ‘Please don't let this hurt’; it was a cringing moment of knowing that I was going to fall at some point. 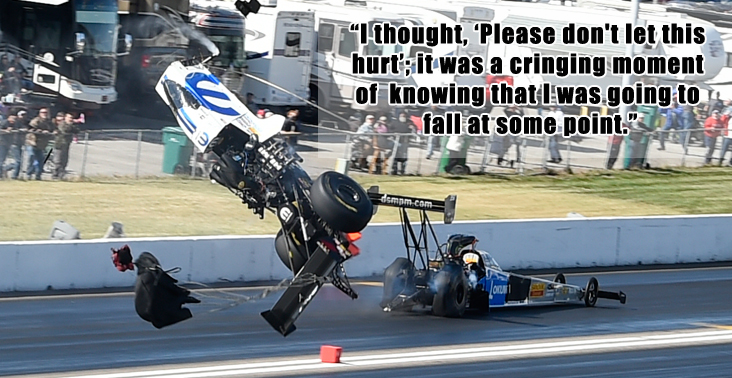 I'm not able to recall the actual touchdown -– the Lord gave me a quick moment of taking my memory of the impact away -- and I can recall everything from the split second after impact and knowing that I was on the ground. I could feel both [rear] tires and that I had brakes to get that thing stopped. I remember my hands being on the steering wheel and I'm like, "What am I doing? I know there’s nothing [front wheels] up there." And then it was just the natural reaction to get out as fast as possible. I didn’t know what the fuel situation was or if things are on fire or where Tony's at. For me the ride was one; I was tall enough to ride that ride, but the ride was over. 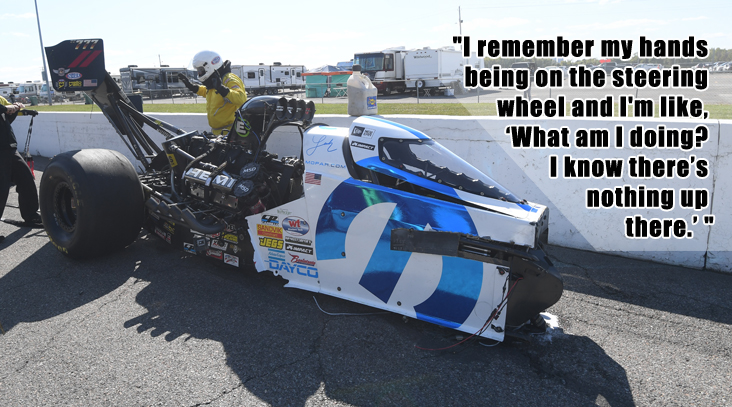 ND: Initially, as you’re on the ride, did you know what had happened?

Pruett: When it bowed up and got airborne, I thought that I was going to blow over, but when it didn't go back on its canopy and there was so much air time, I was confused and still hadn't processed what it looked like. When I saw the footage for the first time, it definitely made a lot more sense.

ND: The parachutes coming out definitely made for a softer landing.

Pruett: The key to the kingdom of the success for me not being hurt is from the parachute righting that ship. We’re still going through everything and the answer of what happened and how it happened and what we're doing to fix, well, we are still in the process of sciencing that it out by reverse engineering. 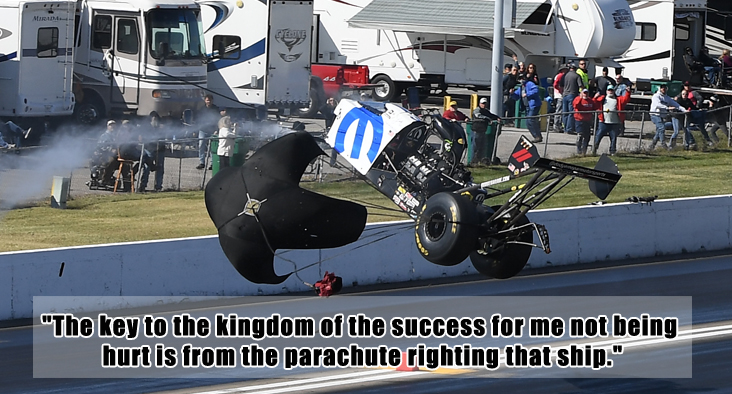 ND: Did you pull them?

Pruett: I believe [the parachutes came out] because the car was in a weird attitude. We have four mechanisms that deploy the chutes -- the [supercharger] burst panels; if your wing has been obstructed or jeopardized, because we have the cables that go through there; you have the transponder on the track 250 feet past the finish line; and we have a distance sensor on the front wheels -- and it wasn't any of those mechanisms, so, be it God, be it negative [air] pressure, be it the twisting motion in the air, or if I pulled them, we’re unsure at this moment.

ND: Was it worse watching the accident from the outside on video or from the inside?

Pruett: From the outside, for sure.

ND: You were racing your teammate, Tony Schumacher, in your backup car, and looked like you were going to win the round.

Pruett: It definitely looks that way. For the record, I don't think anyone's ever been beaten by their own car and their own car in the same race 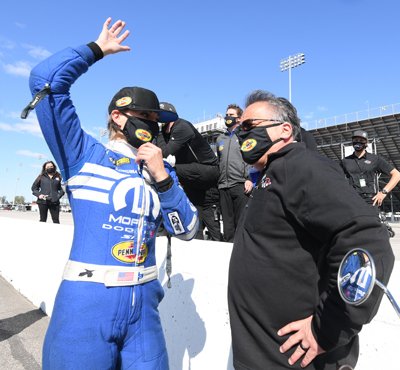 ND: Word is that not long after the crash, you were set to race in your Factory Stock Showdown car. That racing was canceled due to weather, but you were good to go?

Pruett: I was way good to go. I was very truthful with the doctor if I felt anything because I don't wanna jeopardize myself big picture if something was wrong and just lie so I could race. I just really felt fine, went to [the] factory [car], got suited up, and drove that car to the lanes. I told them, ‘I put on my big-girl panties today and I came to race’ but if [the other drivers didn’t want to race, I told them that I support that. I even wanted the lane I’d just crashed in because I wanted to slay this dragon immediately and expedite the road to recovery.

I'm more excited than anything like to get back in the car and get over that first run more than anything. We still have three races left and we’re still heavy in the championship chase, so it’s an exciting time. I'm not letting what happened in E2 of St. Louis take any part of momentum away from what we're trying to accomplish

Pruett: We are in the repo business now. We’re repoing my spare car back from Tony, who was running it. He’s taking one of Antron Brown’s [spare] cars and getting a new front-half on that. 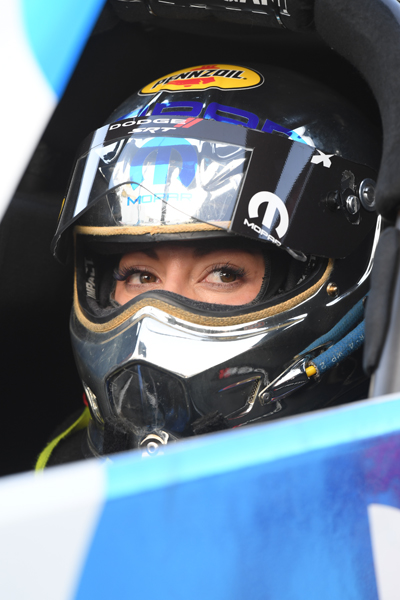 ND: In an interview we did during the pandemic break, you made a statement that got a lot of attention, that we’d see when racing resumed who took a vacation and who put the time to good use. Since we returned in July, your lights have been outstanding and the car seems better than ever.

Pruett: I positioned my practice Tree in a place where I’d see it a lot. Where do you go when you wake up and get dressed? In your closet, and I have it right there and make time for it every day. There’s not time I walk in my closet and not practice on the Tree.

There's been two other things that I'm doing that I ordered online. I thought, ‘We've got time during quarantine, it’s going to be my fault if I didn’t dedicate every effort I had to it. Keeping that up with like the pace in the schedule and then living in two different places, it’s been a little bit more challenging.

I can't pinpoint it to one particular thing, but we’ve worked on the car for the car's reaction time to be better and I've worked online to be better and it's made a substantial difference and, for the first time in my career, I feel confident in a complete package and I know we can get it done, and I think that's what that's what's driving me.

ND: It’s been a challenging season your team, after DSR added both Cory McClenathan and Tony back to the roster, and with your crew chiefs, Todd Okuhara and Neal Strausbaugh, having responsibilities there, too.

Pruett: It was definitely a challenge with Todd and Neal running two cars, so Mike Green coming on with Tony has taken quite a bit of weight away, and I feel like we’re going in the right direction.

A lot of people don't understand that the Torrence crews have their own cars to focus on and [Doug] Kalitta’s team has just their car to focus on and not a lot of changes, but, for us, it's been like chaos all the time, and so for us to have the results that we have had, maybe St. Louis was supposed to happen at that moment to keep us in this high operational state of chaos.

ND: What’s the latest on your Dodge Drag Pak Factory Stock effort. When will you get your new car?

Pruett: We have not received it yet we should be receiving it this winter and then that's when will do all our race team modifications to it.

ND: What about the current car?

Pruett: For [teammate] Mark [Pawuk] to hit No. 1 [qualifier] in St. Louis, the Mopar power is huge, but I'm consistently seven- to eight-hundredths behind him, and we think we know why. Between testing and running in Gainesville and because we both got our programs freshened up at the same time, we think we've identified it down to one thing but it's something that we cannot fix at this moment so we're gonna run El Bandido as hard and into the ground and the focus on a new Drag Pak.