With a very respectable 3.987, Ron Capps is qualified third for today’s final eliminations at the Dodge NHRA Indy Nationals presented by Pennzoil and that’s just fine with him. Capps generally isn’t one to fret over his qualifying results but if there is and a team that has seen the pros and cons of NHRA’s new two-round professional qualifying format, it’s the NAPA Dodge team. At the E3 Spark Plugs NHRA Nationals last month, Capps struggled on both runs and wound up No. 16. That resulted in a round one match against teammate Tommy Johnson Jr. and somewhat predictably, an early exit. A week later at the Lucas Oil NHRA Summernationals, Capps was the No. 4 qualifier but drew another tough match when he was paired against teammate Matt Hagan. That also resulted in a round one loss. 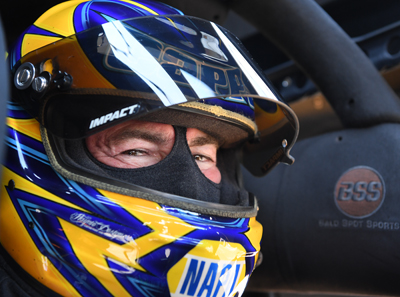 “I don’t really think you can blame the system,” Capps said. “It’s just a testament to how tough the Funny Car class is right now. It doesn’t matter where you qualify; you’re probably going to have a tough race. Look at some of the part-time guys like Bob Bode, Alex [Miladinovich], and Mike McIntire; those are all solid cars that can go 4.0s. You don’t want to take any of them lightly, especially when it’s warm and humid and the track is challenging.

“As for Indy, the first weekend was our own fault,” Capps said. “We didn’t get as many testing runs on Friday as we wanted and it bit us on Saturday when we actually qualified. I ended up on the bump spot and to be honest, we were lucky just to qualify. There was rain moving in and we could have lost the second run and not qualified at all. At the second Indy race, we qualified well but Hagan’s team struggled. That was just the luck of the draw. They got their car straightened out on Sunday and we got beat. Qualifying is such a different dynamic right now.”

When the two run qualifying format was first proposed in NHRA’s return to racing, Capps figured it would be a boon to his NAPA team because crew chief Rahn Tobler seems to have a knack for figuring out each tracks’ unique characteristics and not wasting runs. The wild card in the equation has been the team’s chassis, which was front-halved after the postponement of the Gainesville event.

“Whenever you front-half a car, it always takes a few runs to get it dialed in; at least that’s been my experience as a driver,” said Capps. “They just drive differently for about 10-15 runs. They are generally tighter, and you just don’t have to make as many corrections. The steering reacts more quickly and you have to get used to that.”

Given his qualifying adventures from the last two races, Capps was thrilled to see his 3.98 time slip, and even more confident after a consistent 4.06 appeared on the scoreboards following the Saturday afternoon run, which was run in the heat of the day.

“That [3.98] is what we should have run here the first weekend,” Capps said. “Actually, it was on the rev limiter pretty early so it should have been quicker than that. That’s actually a good thing because it’s easily fixable.

Regarding his point about tough competition, Capps is scheduled to face Tim Wilkerson in Sunday’s opening round. Although he qualified No. 14,  Wilkerson hasn’t lost in the first round this year and he came into the weekend ranked fourth in the Mello Yello Funny Car standings while Capps is tied for sixth place.