The next first-time Pro Stock Motorcycle winner? Kelly Clontz sure likes the sound of that

With the help of a few friends, Kelly Clontz is making steady progress in the Pro Stock Motorcycle class. Now she’s ready to take the next step towards her first victory.
29 Jul 2020
Kevin McKenna, NHRA National Dragster Senior Editor
Feature

When Kelly Clontz sees Jianna Salinas and Ryan Oehler become first-time winners in the NHRA Pro Stock Motorcycle class, it brings a smile to her face simply because it doesn’t take a lot of imagination to see herself in that position.

“That joy; that's exactly how I feel," said Clontz. "When you get to this level you can’t allow yourself to think it won’t be me. I’ve certainly envisioned the future and thought about what it would mean to hold up a Wally.  It was awesome to see Ryan win at Indy a couple of weeks ago at Indy. It’s never one person, but that’s a small team, mostly just him and his dad, and then when Jianna won Pomona last year, that was just so awesome. Of course, I want to be in that group." 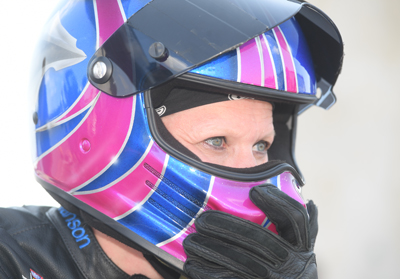 Clontz’s operation is also very much a small team. Her Suzuki is powered by Vance & Hines engines and tuned by her husband and crew chief, Chris. She’s also got a handful of very supportive sponsors including Steamfitters UA local 602, Creations, Holly Rock Customs, and Innovative Creation Experts. Team Clontz has made steady progress since joining the NHRA Mello Yello series, including a career-best 6.874 at the 2019 Gainesville race, but round wins have sometimes been hard to come by.

Like everyone else in the Pro Stock Motorcycle class, Clontz had to wait four agonizing months for her 2020 season debut after the traditional PSM season-opener in Gainesville was postponed due to the COVID-19 pandemic. Her debut at the recent E3 Spark Plugs NHRA Nationals at Indy was a mixed bag. On the plus side, Clontz qualified for the field with a 13th best 7.084, but her round one loss to Scotty Pollacheck by a 6.94 to 7.14 count was very much a let-down. On the heels of a tough Indy loss, the Clontz’s enlisted the help of three-time world champion Matt Smith to help boost their program and the results, at least in early testing, have been positive.

“Indy was definitely a bummer,” said Clontz. “We left there with no data. Our computer wasn’t working; we had no sensors, so we just had to make small changes because we didn’t want to risk blowing up an engine. After that race, Chris and I said to each other we’ve got to do something, so we headed for King, N.C. to see Matt and Angie [Smith].”

Matt Smith is primarily known for his success with V-twin bikes, but he got his start on a Suzuki and obviously knows a thing or two about tuning an inline four-cylinder engine. Smith completely re-wired Clontz’s Suzuki, including the installation of a new Maxx ECU unit. Smith also made several dyno pulls to verify his progress, but the real test came during a recent test session. 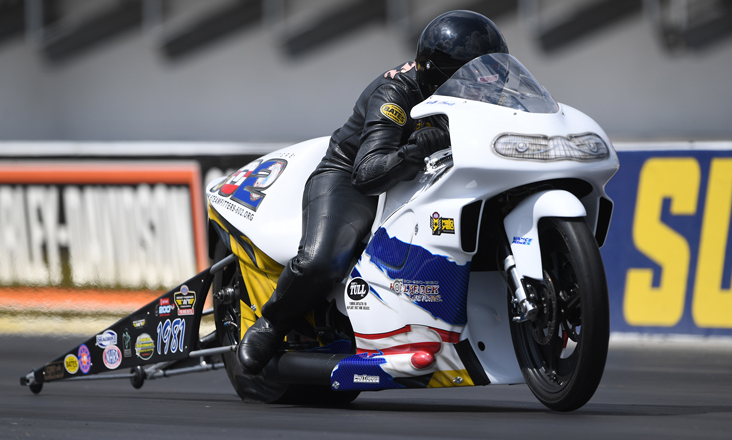 “Matt and Angie spent the better part of a week helping us,” Clontz said. “We’ve been friends for quite a while and we’re still new to this whole class, but when he said he wanted to try the Maxx ECU, we agreed it would be a good deal. You just can’t buy someone with Matt’s experience so when he tells you he wants to try something; you probably should let him do it. Then, they came to Maryland to help us make a few runs, just to make sure we weren’t blind to something. On my third run, I ran a 6.97 in the heat of the day. I mean, it was hot; 96-degrees and the track prep was a bit different than what you’d have at an NHRA race. I think we could have gotten a lot more out of it.”

Now, Clontz is counting the days until she can race again at the upcoming Dodge NHRA Indy Nationals presented by Pennzoil. Based on her testing success, she’s expecting a much better result this time around.

“It's not just the engine or the tuning, we got a new bike this year from Greg Underdahl and I already love it,” said Clontz. “My old bike was good but there were times when you let the clutch out and wondered what it was going to do. This one is smooth. It plants the tire and just goes. I am really looking forward to going back to Indy, and the rest of the season. I know it’s been tough with all the schedule changes but I’m ready to go wherever and whenever we can race.”