News and notes from the Lucas Oil NHRA Summernationals 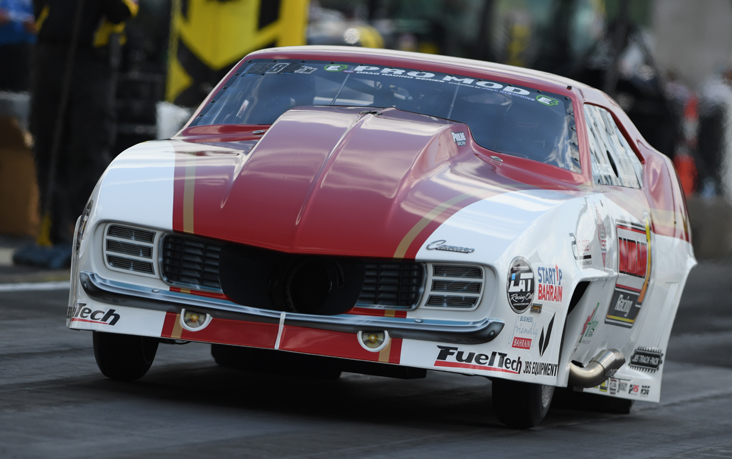 Given the unpredictable nature of Pro Mod cars, it’s hard to label almost any race as an upset, but that was an apt description for what happened when Justin Jones took out former Pro Mod champion Khalid alBalooshi in round one. Jones, making his first start in NHRA competition, grabbed a huge lead off the starting line and held on for a 5.92 to 5.85 holeshot win in a race that wasn’t as close as the numbers would indicate. alBalooshi had been the No. 1 qualifier with his Bahrain1Camaro, one of the first cars to debut the new ProCharger engine combination.

“I got this car from Justin Bond,” said alBalooshi. “He’s stuck in Canada right now and can’t get here to race so when it became available, I had to have it. We made three runs in testing in Ohio and then brought it here. I wasn’t sure what I wanted to do this year but the ProCharger deal looks good, so I think we’ll stick with it for a while.”

alBalooshi wasn’t the only pre-race favorite to begin the season with a tough loss. Reigning Pro Mod champ Stevie Jackson also endured a rare early loss when he lost a great 5.85 to 5.85 side-by-side race against Brandon Snider’s AAP Corvette. Former series champ Mike Janis was also an early casualty. Of the eight drivers who made it out of the first round, only Mike Castellana had previously won an NHRA Pro Mod race.

Top Fuel driver Kyle Wurtzel got a lot of airtime on last week’s FOX television broadcast of the E3 Spark Plugs NHRA Nationals but for all the wrong reasons after he fireballed an engine on his lone qualifying attempt of the weekend. Wurtzel returned for the second Indy event and participated in Friday’s test session, but when it became obvious the team hadn’t corrected their issues, he elected to withdraw from competition. Wurtzel issued a statement saying that he’d traced the problem to an electrical issue and felt it was best to return home and completely rewire the car before attending another event.

After winning the E3 Spark Plugs NHRA Nationals from the No. 6 qualifying spot, Matt Hagan and his Mopar team struggled to make the show less than a week later. Hagan, who opened the 2020 season by qualifying in the top spot in Pomona and Phoenix, was 13th quickest with a 4.275 at just 283-mph. As a result, Hagan drew teammate Ron Capps in Sunday’s opening round.

“With just two qualifying shots, it’s far more nervous when you get up there to the water box,” said Hagan, who debuted a new look chrome Hellcat redeye paint scheme during the second Indy event. “I’m sure plenty of drivers felt that stress level last weekend like we did today. [Crew chief] Dickie Venables did what we needed to do to get in the show and we get to race.”

Hagan made the quickest run of the opening round with a 3.931 to defeat Capps, who was third quickest with a 3.967. Hagan now has a 26-33 record against Capps, who has lost to one of his DSR teammates in all four events this season. 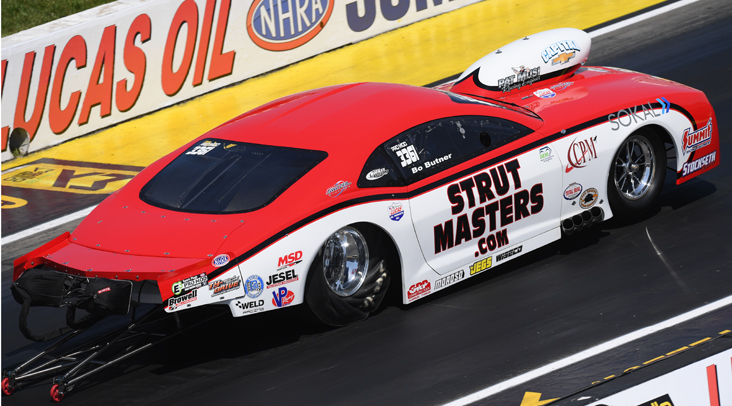 So far in his career, versatile Bo Butner has been a winner in Pro Stock, Comp, Super Stock, Stock, and more recently, Super Gas and now he’s got an opportunity to add Pro Mod to that list. Butner got an opportunity to race in the E3 Spark Plugs Pro Mod series when three-time world champion Rickie Smith had to sit out due to recent back surgery. After some initial struggles, Butner made the field with a 5.904, by far the quickest run of his career.

“That [Pro Mod] car is nowhere near as technical as a Pro Stock car, at least when it comes to driving, but it is a whole lot quicker,” said Butner. “It’s really easy to get into trouble if you don’t pay attention. We had some early problems spinning the tires because this is a nitrous car and it shifts earlier than the blower cars or the turbo cars. Once Rickie got that figured out, we made a decent run.”

In the long awaited 2020 debut of the SAM Tech.edu Factory Stock Showdown, Chris Holbrook flexed his muscles in qualifying with a 7.919, 176.37 in his Cobra Jet Mustang. Holbrook also built the engines for Bill and Drew Skillman, who were the second and third-quickest qualifiers. The quickest non-Ford driver in the field is Aaron Stanfield, who wheeled the Janac Bros. COPO Camaro to a 7.982 for the No. 4 starting spot. 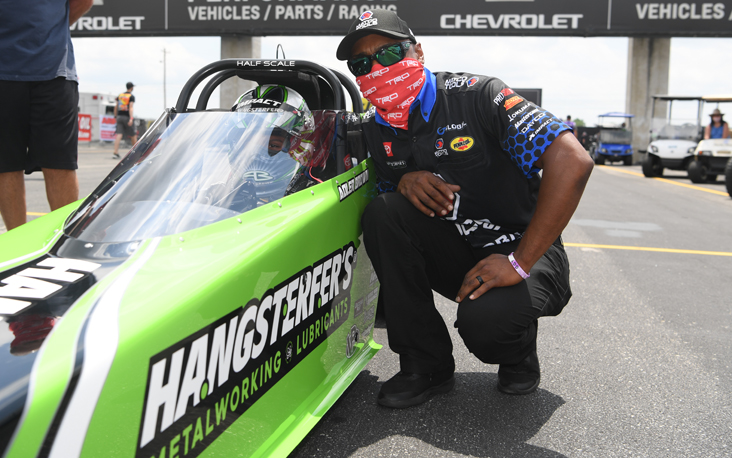 The Lucas Oil NHRA Summernationals also featured two classes for Jr. Dragster competitors and their performance was no less impressive than their professional counterparts. The Jr. Dragster Pro class features a 7.90 index and a 16-car qualified field. A total of 30 young racers entered the event, and the field stretched from Trey Harney’s perfect 7.900 run to a 7.916. The Jr. Dragster field featured a couple familiar names including Cam McMillen, son of Amalie Top Fuel driver Terry McMillen and Anson and Adler Brown, sons of three-time Top Fuel champ Antron Brown.