Terry McMillen’s and his Amalie Top Fuel team are often described as underdogs and regarded as one of the class’ smaller independent squads, but their little guy status goes only so far.
12 Jul 2020
Kevin McKenna, NHRA National Dragster Senior Editor
Feature

Terry McMillen’s and his Amalie Top Fuel team are often described as underdogs and regarded as one of the class’ smaller independent squads, but their little guy status goes only so far. For one, McMillen kept his entire crew employed during the four-month layoff due to the COVID-19 pandemic. He’s also got a shiny new hot rod for this weekend’s E3 Spark Plugs NHRA Nationals.

“Our team has stayed intact all season; Not one layoff or furlough or whatever you want to call it,” said crew chief Rob Wendland. “Let’s face it, there is always something you can do when it comes to these cars. Even after you’re done servicing the car and inspecting parts and building engines, you can always do work in the shop, even if its cleaning the floors. In our case, we remodeled our trailer and did a lot of little things to stay busy. Terry made a commitment to keep this team intact so we owed it to him to be as prepared as possible whenever we got back to racing. My to-do list probably had 25-30 projects after we got back from Gainesville and I maybe got 25-percent of them done because the list is always growing.” 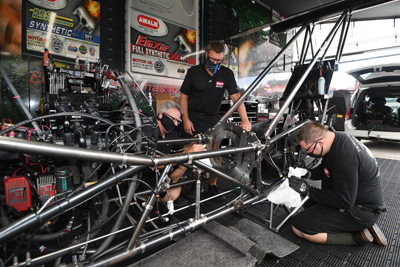 One other facet of the Amalie team that helps debunk the underdog myth is their ability to innovate and create from within. To that end, McMillen will be racing an all new chassis this weekend. The car was designed by Wendland and built mostly in-house with the help of veteran crew member and fabricator Tony Derhammer of Hammertech Race Cars, which is located in Brownsburg, just across the alley from McMillen’s shop. Wendland believes a stiffer chassis is in order, so the new car is constructed from .058 wall tubing, thicker than the .049 minimum required by rule.

“We gained 18-percent more strength and the cost in weight was just three pounds,” said Wendland. “I’m excited about it for a number of reasons. I think it will be good on hot tracks, which we’re likely to see a lot of this summer and it should also benefit in terms of longevity. I don’t see us front-halving this car as often as other teams. We’ve also changed the way we hold the motor in the car.”

McMillen’s new car was ready to go in Gainesville, but it was never run for obvious reasons. The Amalie dragster was the first car down the track during Friday morning’s open test session and while the end result was a 200-foot early shut off, it did provide some initial data that looked promising. McMillen ultimately made the quickest run of the two-day test with a 3.81 and later qualified for the tough field on Saturday with another 3.81-second effort.

“It’s amazing how fast this car responds,” said McMillen. “It goes straight as an arrow and it arches very quickly. You can feel the difference right away. We’ve only made a handful of runs but I can already tell this is a better design.”

McMillen also had zero reservations about climbing in an untested race car and hitting the throttle for the first time.

“None at all,” he said. “True, you don’t know what the car is going to do but we have an educated guess. “This design is different, but its not so radical that I’d worry about driving it. On the first run, I shut it off early and we still ran a 3.81 and runs like that give me a lot of confidence. The biggest thing is that this car should last longer. Typically we get about 100 runs before the chassis needs to be front-halved.”

McMillen ultimately lost in the first round after smoking the tires against Antron Brown, but that did little to diminish the team's outlook going forward.

“The [new two session qualifying format] is going to be a game changer,” Wendland added. “You have to have confidence in your tune-up, which I do. I’m pretty confident in our set-up, especially in hot weather. That’s when we tend to do our best. My mentality has always been to get it down the track, and get in the show on the first run and hopefully that will continue.”