Challenged on Twitter to pick a random NHRA driver, fans responded with a wide-ranging and impressive list of their favorites. Now you get your chance, too.
04 Dec 2020
Phil Burgess, NHRA National Dragster Editor
DRAGSTER Insider

Fandom is such a unique thing. What attracts one person to a specific celebrity or athlete varies differently from what others may think. Some people become fans based on accomplishments, others on intangibles like work ethics, personality, and sportsmanship. In drag racing, maybe it’s based on brand loyalty or class preference, a specific car or sponsor, or maybe that autograph that Don Garlits gave you when you were a kid.

So when, in separate Twitter posts by NHRA and Cruz Pedregon six weeks apart, followers were asked to offer up the name of a random NHRA drag racer, I was interested to see where the allegiances lay. I figured that people would reveal not only their favorite racers but, by doing so, the eras they treasure and the people who have had impacts on their drag racing life. 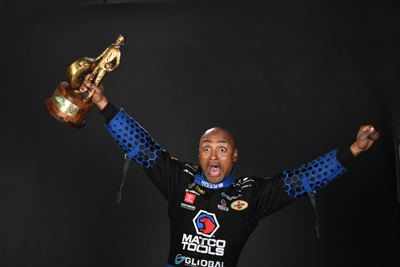 But, because you’re here, and you probably figured that the newer folks would be on the mind of the younger-skewed Twitter crowd, like me you probably were interested to see which drivers from previous generations still resonate with the 280-character, hashtagging crowd. 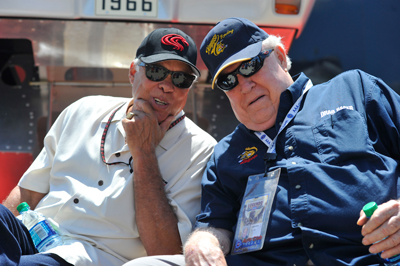 With about 500 responses between the two tweets, there a lot of our favorites who got multiple homages, led, not unexpectedly by the likes of Garlits, Don Prudhomme and Tom McEwen (both separately and together) and Shirley Muldowney. The single biggest “vote-getter” clearly were Eddie Hill and Bob Glidden, a testament to their continuing legacy years after they disappeared from public view.

“TV Tommy” Ivo also got a surprising amount of love. As did the late Top Fuel champ Gary Ormsby. “Jungle Jim” Liberman was another expected favorite, but he got the same amount of nods as wheelstanding legend Bill "Maverick" Golden. 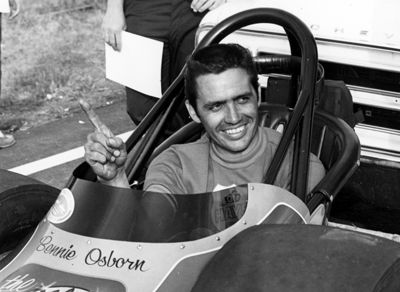 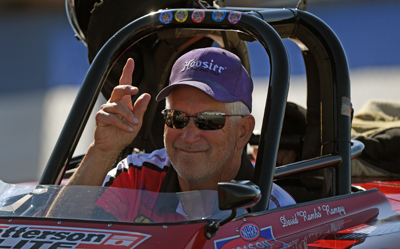 Sportsman racers also got some shout outs, which was cool to see, even if it was the top echelon of the group with people like David Rampy, Dan Fletcher, Sam, Peter, and Sal Biondo, Anthony Bertozzi, Jackie Fricke, Bucky Hess, Todd Patterson, and both Pat and Bucky Austin.

At some point in the game, it became the goal to not just come up with a random name, but one that would make people go, “Oh yeah, I remember them.”

Cristen Powell, the teenage female Top Fuel sensation of the early 1990s, certainly falls into that category. Floyd Lippencott Jr. (aka Bob Muravez), too. Seeing someone remember Dave Edstrom, the blind and inspirational tuner of the Blind Faith nitro cars, brought a smile to my face, as did multiple mentions of one of Pro Stock Motorcycle racing’s (maybe even drag racing’s) greatest human beings, the late John Myers. 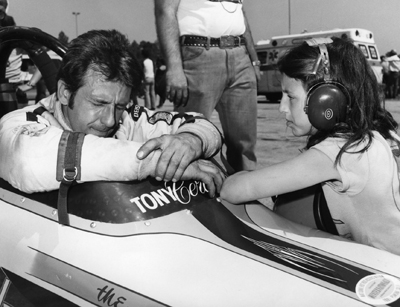 The names of not-well-known Top Fuel racers like the pride of Dardanelle, Ark.,  Rudy Toepke (crew chief: John Melden), Maurice Dupont (famously sponsored by M.C. Hammer), and Tony Ceraolo (pictured at right and best remembered for having his young daughters as crewmembers on his “Traveler” dragster) were thrown around. IndyCar driver turned Top Fuel pilot John Andretti got a nod, as did NASCAR’s Kurt Busch, who had a very short Pro Stock career, and Richard Petty, who competed in drag racing in 1965 while in a dispute with NASCAR.

So you’re probably wondering (or not) what your ol’ pal Phil came up with, right? Well, to me (and several online dictionaries I consulted), the definition of “random” is “chosen without method or conscious decision” which is definitely not what I did. 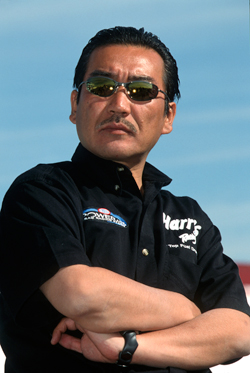 I went for obscure -- but not quite Ginger Watson (blown fuel dragster driver from the mid-1960s; thanks Bret Kepner)-level obscure -- yet memorable and with historic footnotes. My pick?

My tweet was immediately met by two responses, the first from Billy Anderson (@DragRacingBilly) who wrote, “Or as I call him, ‘The bastard that bumped "Big Daddy" out of the Indy 2002 field by .003-seconds!’ Can you tell I'm bitter? It was my only trip to Indy and I purposely went to see @dgarlitsand @RealMuldowney. Thankfully, Shirley won a round!).” The second was from my good pal, drag racing encyclopedia, and budding “big show” nitro crew chief Brad Littlefield who correctly added, “Yuichi also ended the Forever Red tour at the Finals.”

Both correct! And two reasons why I picked him (there are others).

I had originally planned to transition toward the end of this column with a few paragraphs about Oyama’s 2002 season, citing, as Anderson mentioned, how Oyama bumped Garlits from the 2002 Indy field (the only time that Garlits ever DNQ’d at Indy) and how also he ended Kenny Bernstein’s swan-song retirement tour in round one of the Finals, but after talking on the phone yesterday to my old pal Robert Reehl, who was Oyama’s crew chief that season, and getting way too much and way too entertaining material to jam into a few lines here, I’ll devote the next column to that topic (and if you have contact with Yuichi, please point him my way!).

I’ll end this column instead with my own challenge to you. Who’s your “random” drag racer and why. Click the link below to email me your shout out and a sentence or two of why. Photos appreciated!