With the NHRA Hot Rod Heritage Series idled, Matt Byrum, the car chief on Alexis DeJoria’s ROKiT/ABK Beer Toyota Funny Car in the NHRA Mello Yells Drag Racing Series, is still one of the year’s biggest winners, having raced to an inspirational victory at the Good Vibrations March Meet.
13 May 2020
Posted by NHRA.com staff
Feature 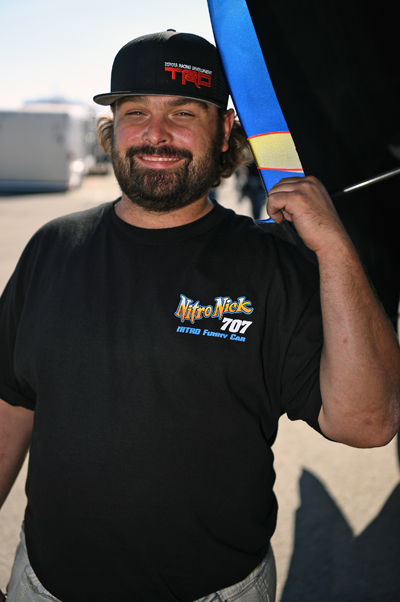 Before he strapped into Jason Rupert’s nitro-fueled Nostalgia Funny Car in 2013 and successfully earned his first NHRA license in the minimum required six passes, Matt Bynum had never taken anything with an engine down a dragstrip.

Today, even with the racing world idled, Byrum, the car chief on Alexis DeJoria’s ROKiT/ABK Beer Toyota Funny Car in the NHRA Mello Yells Drag Racing Series, is still one of the year’s biggest winners, having raced to an inspirational victory at the NHRA Hot Rod Heritage Series season-opening Good Vibrations March Meet in Bakersfield, Calif.

Most aspiring drivers work their way up NHRA’s Sportsman ranks or start behind the wheel of a Jr. Dragster, but not Bynum. He literally went from 0 to 230 mph. It was a big leap for the Southern California native, but for someone who grew up in the sport and has been hands-on in all aspects, Bynum was confident he could handle the complexities and intricacies that driving a nitromethane-burning beast entails.

“I had never even staged a golf cart before,” joked Bynum as he recalled the day that he pulled up to the starting line at Sonoma Raceway, ready to step on the throttle for the first time. “I’ve been involved with drag racing my whole life. Driving was something I always wanted to do in the back of my mind, but it wasn’t something that I thought would necessarily be a realistic goal.”

Learning from ‘the Teacher’

Bynum was bitten by the racing bug early on; it was in his blood. He was always present when his father, Chris, raced the family’s Top Gas dragster at local dragstrips. When Bynum’s father passed in 2001, he began spending all his free time at the home of his neighbor, NHRA Funny Car veteran Gary Densham, who also had been his father’s former shop teacher in high school. Bynum tinkered on Densham’s car and soaked up as much of the “old school” drag racing culture as he could.

Still a middle-schooler, Bynum was too young to travel with the team, but by the time he was in high school, Bynum grew to become an integral part of Densham’s “Teacher’s Pet” operation, helping Densham put together his first Nostalgia Funny Car.

“I used to race with Gary and Jason Rupert as much as I could,” said Bynum, who moved to Michigan in 2012 to become a full-time crew member for Kalitta Motorsports on a “big show” car and travel the country as part of the NHRA’s Mello Yello Series. “My first year at Kalitta, I saved every bonus check and was able to put together a deal with Jason to get my license in his nostalgia car. The whole licensing thing was pretty much just for fun; something to see if I could do it, I really didn’t think it would lead to anything.”

It didn’t take long for Bynum, who is well-connected throughout the drag racing community, to get hooked up with a team, and in 2015 he was named the newest driver of Cecil Matthews and Randy Luchetti’s Matthews Motorsports “Nitro Nick” 1974 Chevy Vega, thanks to an introduction from Nicky Boninfante, who has worked with Bynum since his earliest days at Kalitta Motorsports and whose father, “Nitro Nick” Boninfante, fielded Funny Cars for three decades.

“When Matt first got licensed in Jason Rupert’s car, I called Jason and asked how he did, and he said Matt really did great,” explained Boninfante. “At the time, I was in the process of selling one of our family’s nostalgia Funny Cars and got hooked up with Cecil and Randy. They were looking for a driver but also someone that could work on the car and help run the car.

“Matt is a hard worker, has a good attitude, ambitious to learn new things, and had an interest in driving, so I recommended him to Cecil and Randy. I gave them his number, and it’s been pretty incredible to see what they’ve built over these past few years.” 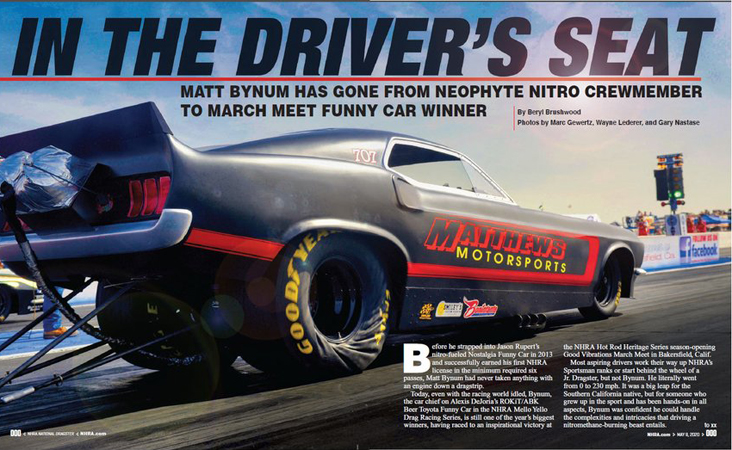 Bynum’s tenure with Matthews Motorsports has been dotted with ups and downs. The team competes together about five times a year, and has experienced mild success, but has also suffered their fair share of adversity, including a serious car-flipping crash during a test day for the 2019 March Meet event in Bakersfield, Calif.

“There was a time when I thought about quitting,” admitted Bynum as he reflected upon the incident that sidelined the team for that particular event. “I knew that I definitely wanted to drive again, but I doubted myself. Crashing like that, it knocks you down a few pegs, and getting back in the car for that first run back wasn’t as easy for me as I had probably portrayed. But, eventually, the confidence came back.”

Bynum and the Matthews Motorsports team wasted no time getting the car put back together, and by June 2019, they were back racing again. They began to chip their way back to a solid baseline and appeared to be headed in the right direction when they capped off their year with a win at the 49th annual Governor’s Cup Championships at Sacramento Raceway. 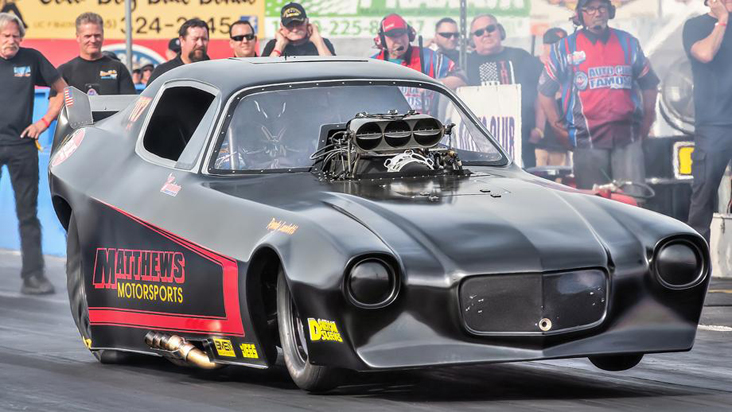 It all came together at this year’s March Meet event, where the Matthews Motorsports team was truly able to realize the fruits of their labor. The team laid down a 5.57 e.t. at 261 mph right out of the gate to claim the No. 3 qualifying spot. They were unstoppable on race day, posting the lowest e.t. of each round to claim the prestigious victory and earn the title of March Meet Nostalgia Funny Car champions.

“It was awesome,” said Bynum. “The March Meet is a race I’ve been going to for nearly 10 years. We had been to the semi’s once before there but, short of that, I’ve had more bad races than good at the March Meet. To have a race where we came out and dominated every run was exciting for our team.

“We suffered some hardships, and some trials and tribulations a year ago, so to rebound with running low e.t., making our career-best run, and winning the race was just incredible.” 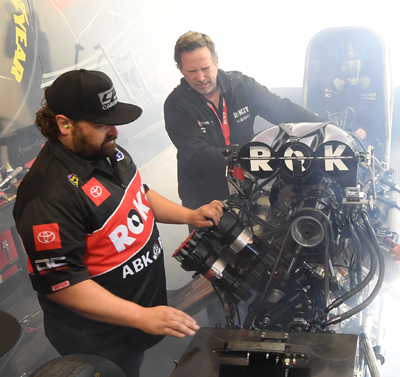 “Obviously, the ultimate dream is to drive a Funny Car in the Mello Yello Series, but for someone like me without big money behind them, I’m not sure how attainable that dream really is,” he admitted. “The fact that I even got to license in a ‘big show’ car is pretty amazing, especially because I didn’t write a big check or anything to do it.; I put in as many hours possible working for Del on the side, and we used that as my ‘payment.’

“For now, the goal is to just keep having fun. I’m back out living in Southern California, working with Del and Nicky as the car chief on Alexis’ car, and once we get back to racing, I plan to spend every off weekend with my nostalgia team chasing race wins.”