Keeping Calm and Carrying On

The NHRA community pulled together as one during the COVID-19 pandemic to complete an entertaining and safe season of racing.
31 Dec 2020
Phil Burgess, NHRA National Dragster Editor
2020 in retrospect

March 12 was the day that the drag racing world stood still after the World Health Organization declared the surging novel coronavirus (COVID-19) outbreak a global pandemic.

On the advice of the governor of Florida, NHRA officials quickly moved to shut down spectator attendance at that week’s Amalie Motor Oil NHRA Gatornationals, the third race of the 24-stop national event calendar, and allowed just the NHRA Lucas Oil Drag Racing Series competition already underway to complete at Gainesville Raceway. 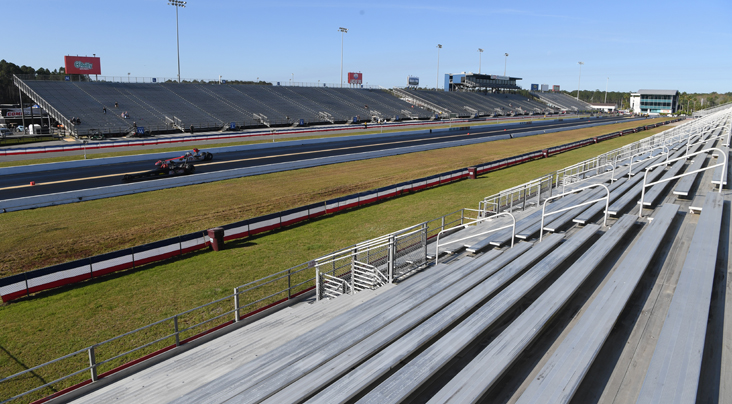 Working in concert with state and local officials across the country, NHRA slammed the brakes on all competition — including events at all NHRA-owned tracks and any NHRA-sanctioned events, such as the NHRA Mello Yello Drag Racing Series and the NHRA Lucas Oil Drag Racing Series — but immediately began charting a course for a safe return to racing, creating a special task force to establish protocols and continually collaborating with race teams, racetracks, and sponsors on an ever-shifting schedule as the pandemic raged on and affected different areas of the country in different ways. NHRA also was in regular communication with its NHRA Member Track Network, working on ways for them to safely reopen.

“We made this decision with heavy hearts as we see the effects this pandemic is having on the world, the country, and our NHRA family,” NHRA said in a statement. “We believe this is the right decision since social distancing and reducing gatherings of people has been recommended as one of the most effective ways to protect everyone in the long run.”

In mid-March, no one knew the long-ranging impact or extent of the pandemic, and NHRA’s initial plan called for a 30-day moratorium, with racing resuming April 17-19 at the Mopar Express Lane NHRA SpringNationals in Houston, postponing both the completion of the Gatornationals and the Denso Spark Plugs NHRA Four-Wide Nationals in Las Vegas.

By late March, the rampaging pandemic led NHRA to postpone all national event racing until June 5-7, when NHRA hoped to contest the balance of the Gatornationals. A revised schedule of 17 remaining dates, including two tentative makeup dates, was announced, six of which were scheduled to be condensed to two-day competition schedules for the Pro classes due to “economic and logistical factors.”

The spring four-wide events in Las Vegas and Charlotte, the Southern Nationals, the Virginia NHRA Nationals, NHRA Thunder Valley Nationals, and New England Nationals were all temporarily postponed due to state and local mandates. NHRA also announced that the traditional Countdown to the Championship format would not be used in 2020.

As the fluid nature of the pandemic roared on, in early May NHRA revised the national event start date to early August in Seattle, posting the planned June and July events in Gainesville, Houston, Bristol, Norwalk, Chicago, Denver, and Sonoma with the stated goal of returning to racing with fans in attendance, even if in limited numbers.

“We have looked at other motorsports that are starting to run races without fans, and it just doesn’t make sense for us,” NHRA President Glen Crowell stated in a May 11 interview with NHRA National Dragster. “Our fans are the true fabric of what NHRA Drag Racing is. We’re working on a racing re-engagement plan that includes opening doors for our race teams and fans with state, local, and CDC [Centers for Disease Control and Prevention] guidelines. Although the desire to get open quickly is there, you don’t want to make mistakes and have someone get hurt or even infected at their track.”

In what was considered a major state forward and a template for the national event schedule, points-based racing resumed on the divisional event level with enhanced safety protocols and no spectators May 22 at the Division 4 Lucas Oil Drag Racing Series event at Texas Motorplex, but, like their big brothers on the national event calendar, numerous LODRS events were being already canceled or postponed.

The NHRA task worked with state and local governments and began sharing best practices among all sanctioning bodies, including NASCAR, IndyCar, IMSA, USAC, and SCCA, to develop the national event guidelines that included the mandatory use of temperature checks and face masks for all in attendance, hand sanitizers, required social distancing, and increased cleaning and sanitizing of bathrooms and commonly touched surfaces. 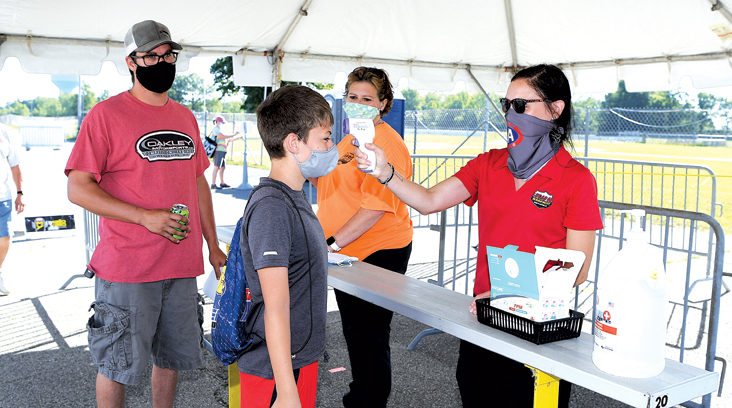 When it became apparent that the hope for restart in Seattle could not happen due to local restrictions, in early June NHRA officials decided, with the blessing of Indiana state officials, to create its own “bubble”-like atmosphere by hosting what was planned as two but ultimately would become four straight events at its showcase facility, Lucas Oil Raceway at Indianapolis, where it could maintain tighter control of the protocols.

“Because we are an outdoor sport, we feel comfortable opening these Indianapolis events to a limited number of fans who are the lifeblood of our sport and following the guidance of the state of Indiana to resume racing,” Cromwell explained.

The first event, the July 11-12 E3 Spark Plugs NHRA Nationals, and the Lucas Oil NHRA Summernationals a week later on July 18-19 were huge successes within the narrow confines of the guidelines and instilled confidence in the NHRA and its stakeholders that the right path had been chosen. For those unwilling or unable to attend, the NHRA on FOX television programming played out to record numbers of viewers and NHRA continued to offer free digital viewership of its magazine, NHRA National Dragster, to a race-starved audience. 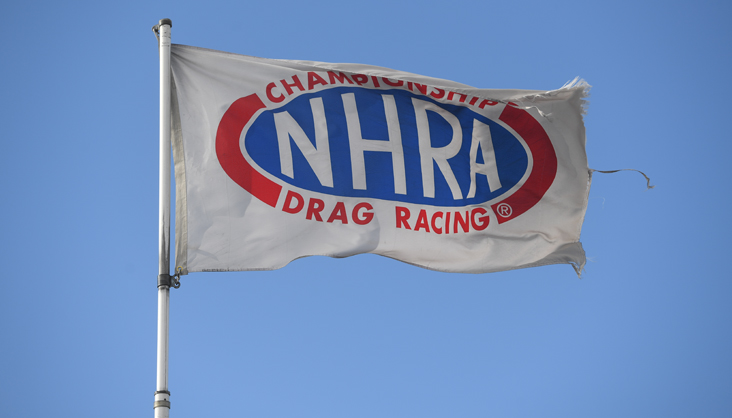 The postponement of the Seattle, Denver, and Brainerd events led to the addition of the third Indy event, the Dodge NHRA Indy Nationals, followed on the schedule by the traditional Denso Spark Plugs NHRA U.S. Nationals, which featured a Sunday finish instead of its traditional Labor Day Monday conclusion.

Eventually, the national event season boiled down to 11 events, as the spring Las Vegas event, both Charlotte events, and dates in Atlanta, Richmond, Chicago, Topeka, Bristol, Norwalk, Sonoma, and Epping all were shifted from “postponed” status to “canceled” due to state or country restrictions. The traditional season-ending Auto Club NHRA Finals also was canceled, meaning that the season would conclude at The Strip at Las Vegas Motor Speedway in Nevada with the rechristened Dodge NHRA Finals, Oct. 30-Nov. 1. It marked the first time since 1974 that the season did not end in California. 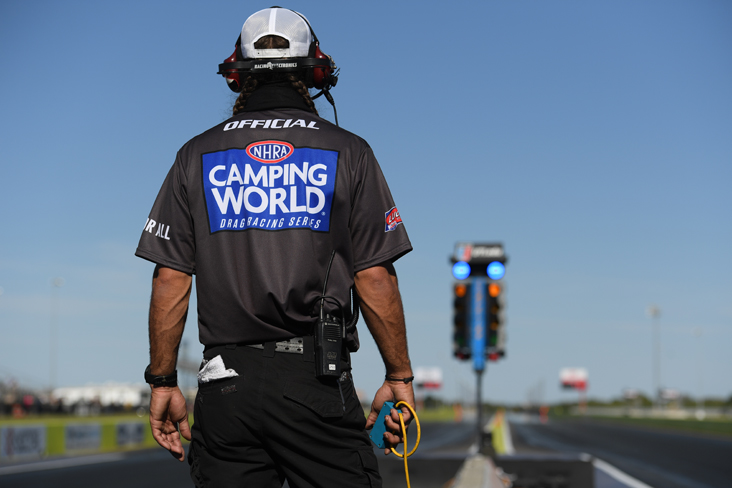 The traditional year-end Awards Ceremony was the final casualty of the pandemic, but NHRA found a novel way to help the champions celebrate, creating a rolling party caravan through the Las Vegas pits loaded with champagne and championship hats and masks that stopped in the pits of each champion. NHRA President Cromwell and the champions addressed their tired but happy crews before the corks popped and the champagne spray flew to bring to a conclusion a season that will long be remembered for its challenges and its successes in the face of the most difficult season in NHRA history. 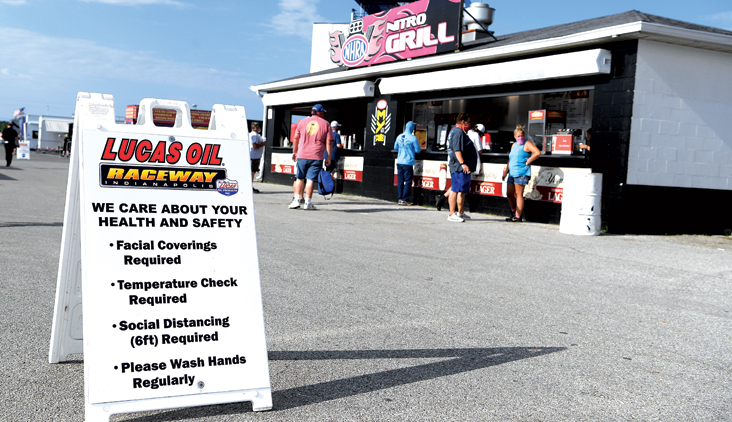 Hagan perhaps summed it all up best. “I was super proud of NHRA to just say, ‘Hey, we’re going to make this happen. We’re going to get fans in the stands,’ and I was proud to be a part of that,” he said. “I was glad to be a part of something that we can bring fans out and put a smile on their face for the day. It was important to me.”