Finally, Gratefully at the Finish Line 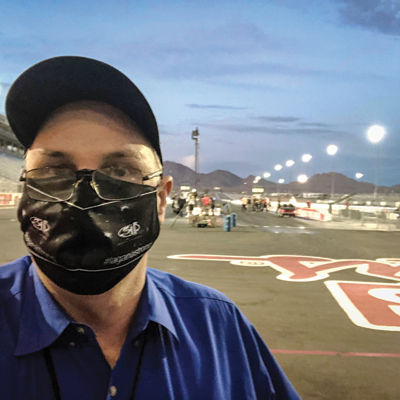 I stood on the starting line at The Strip at Las Vegas Motor Speedway on Sunday, Nov. 1, marveling that it was all over. The selfie photo that I took for posterity stamped the time in my phone as 4:56 p.m. In the background, above the fading daylight playing on the Nevada desert mountains, you can see the NHRA Safety Safari tearing down the starting line after the Dodge NHRA Finals.

You can see in my eyes that I’m worn out after a frantic final day of points calculating and typing as fast as my fingers would allow, helping capture the magnificent moments of a frantic and challenging season of battling the COVID-19 pandemic. The #LaganaStrong mask that I’m wearing will forever be a symbol and reminder of this crazy year filled with dread and loss but also hope and resiliency.

In the staging lanes not far from where I stood, NHRA officials were gathering the troops for a mini championship parade, bringing celebratory hats, masks, and champagne to the pit areas of the Camping World champions. It was the first time since 1974 that our world champions were crowned outside of California, such are the circumstances brought on by the most difficult year of my life and certainly of NHRA’s 70 years of operation.

There have been other problematic seasons, like 1974, when the energy crisis led to gasoline shortages that challenged racers and fans alike, or 1981, when inclement weather greatly impacted the season, or 1991, when an explosion severely damaged a nitroparaffin plant in Sterlington, La., that produced 75% of all nitro fuel used by drag racers, leading to a temporary worldwide shortage.

But the COVID-19 crisis was of a whole other order of magnitude. It didn’t care if you were a racer or race fan. It was capable of taking your job, you or a family member, and your peace of mind, and maybe even all of the above.

As the reality of the pandemic and its far-reaching tentacles became more obvious throughout the spring, I wouldn’t have given you two work clutch discs for the chance of completing any racing this season. All around us, events were being canceled, and not just in our racing world: concerts, movies, school graduations.

But, as NHRA founder Wally Parks used to say all the time, “Where there are drag racers, there is know-how,” and even though no one at the NHRA had ever lived let alone tried to stage events during a pandemic, we found a way. Being able to stage 11 national events — with fans — was a major accomplishment and a testament to the NHRA’s COVID-19 task force and the cooperation, inspiration, and dedication of the NHRA community as a whole.

I’m super proud of the work that we all put in during that long four-month break between mid-March and mid-July. Our content teams — print, web, video, and social — cranked out a high volume of quality content to keep our fans engaged. NHRA National Dragster took the unprecedented step to make a digital version of this NHRA institution free for all to read as our gift to the community.

Sure, there were plenty of rough moments. The ever-shifting schedule that left us all wondering where — or if — we’d race next, the cancelation of events that left longtime fans without a major event for the first time in decades; race teams sidelined for financial or personal reasons; layoffs and furloughs throughout the sport, including here at NHRA; and the sobering highway accident involving Dom Lagana. We were shaken when high-profile members of our nitro-racing racing community, like Funny Car driver Bob Tasca III and crew chief Todd Smith, contracted the disease and when veteran Pro Stock Motorcycle crewmember “Jock” Allen lost his mom and almost his own life, spending more than three weeks on a ventilator fighting for recovery.

For a variety of reasons, I didn’t attend a race between the Winternationals and the U.S. Nationals — assuredly my longest drought in decades — and I’ll admit that the prospect of boarding a packed plane for Indy brought back the feeling of concern I had when I boarded my first flight a week after the Sept. 11 attacks. But, by that time, NHRA had already staged three events in Indy, attended by co-workers and racers in what clearly was a safety-conscious environment, and I missed the smell of burning rubber and the camaraderie of my racing friends.

As I look back, it was those loves that probably got us all through the last nine months, I thank you all for whatever part, large or small, that you played in that. Stay safe.