Jeg Coughlin Jr. vs. Jason Line: By the numbers

Jeg Coughlin Jr. is well known as one of the sport’s most naturally gifted drivers while Jason Line is as much known for his ability to build competitive engines. On the track, their careers have taken remarkably similar paths. Coughlin entered the Pro Stock class in 1997 after winning the Super Gas championship in 1992. Line was crowned the 1993 Stock world champ before making his way to Pro Stock in 2004. Both drivers announced their retirement from active competition at the conclusion of the 2020 season. Here’s a look at how their Hall of Fame careers compare with each other. 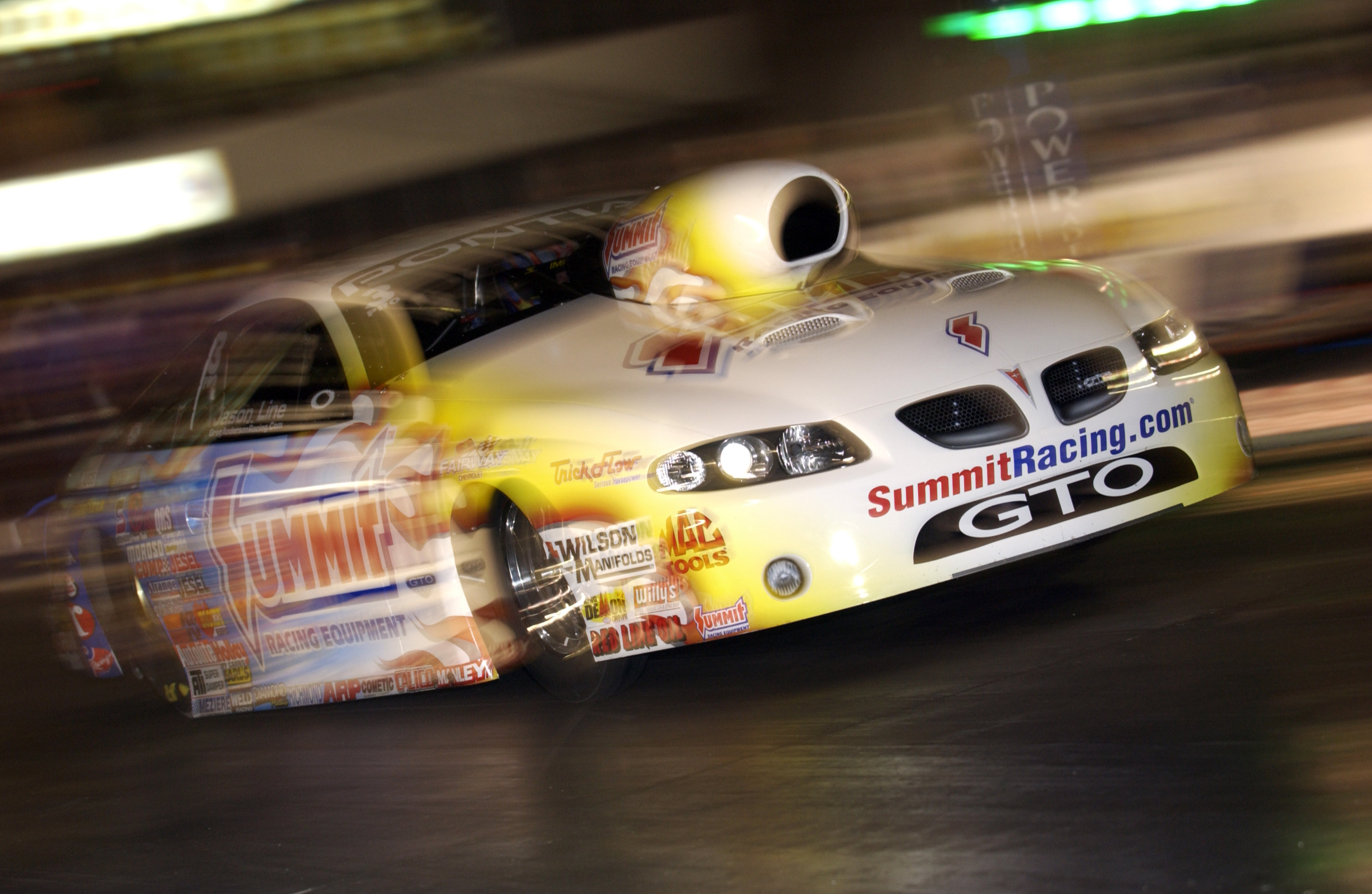 In June of 2005, midway through Line’s first season as a pro, he raced Coughlin in a final round for the first time. In what would become a recurring theme during their rivalry, Coughlin left first by a slight margin (.023 to .039) but Line turned on the win light with a 6.783 to Coughlin’s 6.800. At the finish line the two cars were separated by just .001-second. 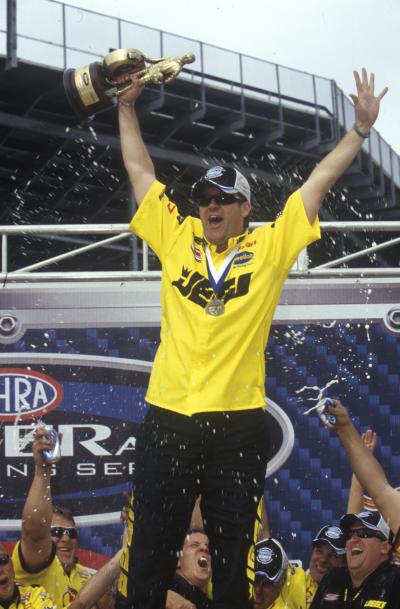 No one in drag racing has more holeshot wins than Coughlin and one of his most memorable came in the final of the 2007 Chicago event. Coughlin was nearly perfect off the starting line with a .002 light and posted a 6.658 to hold off Line’s quicker 6.656.

By this point, Line held an 11-4 edge in overall races, but Coughlin added another win with an impressive performance at the 2008 Gatornationals. Coughlin ran low E.T. of the event with a 6.618 in qualifying and later finished the job in the final when he beat Line in another close battle, 6.652 to 6.656.

In May 2009, Coughlin and Line met in the final of the St. Louis event and this one was decided early when Line fouled by just two-thousandths of a second. In terms of performance, Line had the slightly quicker car, running a 6.578 to Coughlin’s 6.588. Ironically, neither driver was impressive in qualifying. Line came from the No. 6 spot while Coughlin was No. 8.

Coughlin won the 51st Pro Stock title of his career with a strong performance that included a .010 light and a 6.590 to hold off Line’s 6.602. The win was Coughlin’s second in Sonoma and his third of the 2010 season.

Coughlin kicked off the 2013 Countdown to the Championship with a holeshot win over low qualifier Line in the final round at zMax Dragway. Coughlin left first, .026 to .052 and hung on for a 6.583 to 6.578 holeshot victory. Coughlin used the win as a springboard to his fourth Pro Stock world title. Despite the loss, Line maintained a 24-19 edge over Coughlin in head-to-head Pro Stock races. 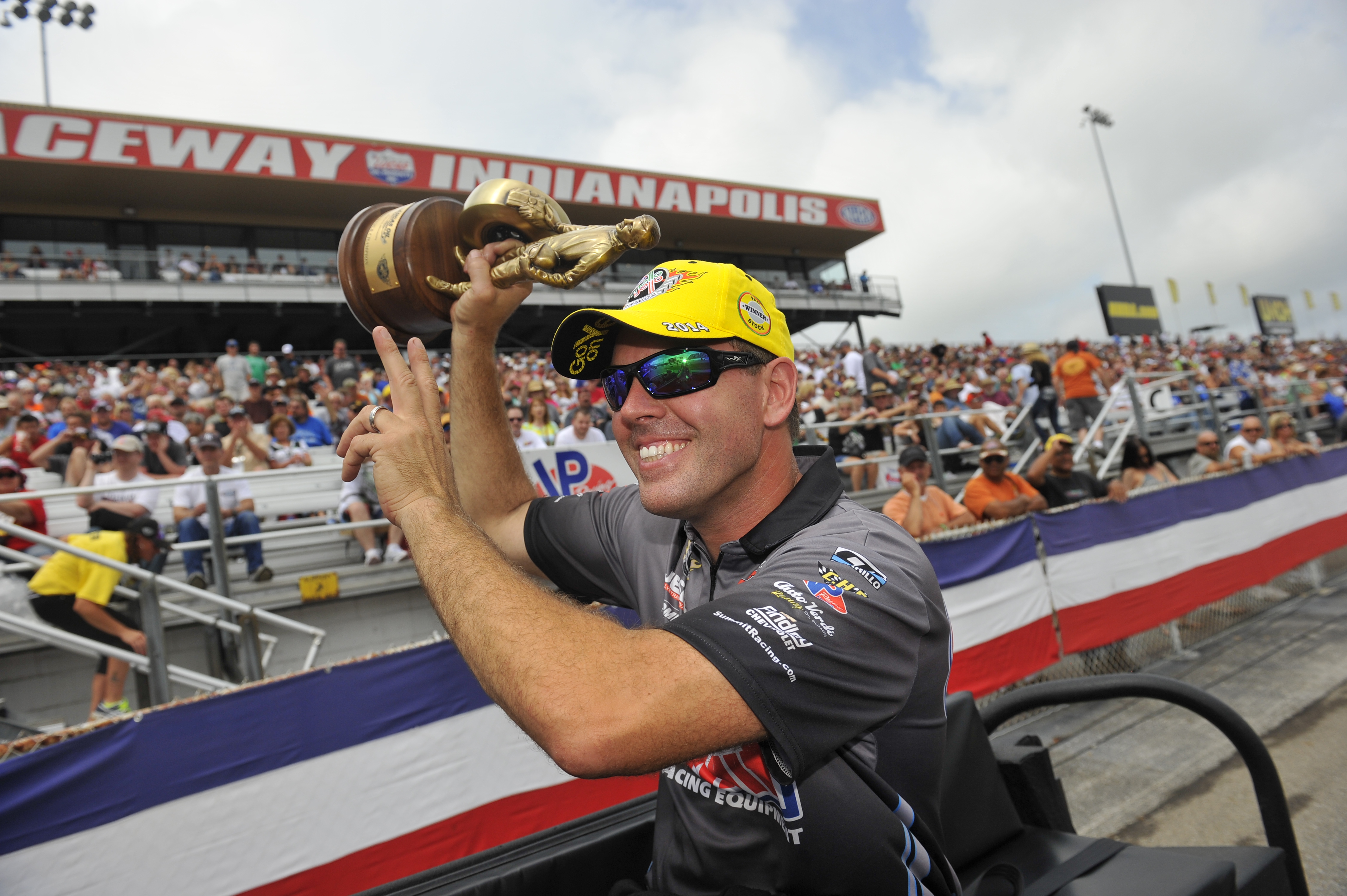 Line has often noted that his home race in Brainerd is the most meaningful stop on the NHRA tour and his win in 2014 was one of the highlights of his career even though the last two rounds were contested at Indy due to rain. Line qualified No. 2 and then completed the victory with a tidy .005 light and a 6.596 to win his third-straight race and fourth of the season. Coughlin was well back with a 6.635 elapsed time.

It’s surprising that Line and Coughlin went six years without meeting in a final round, but their rivalry resumed in 2020 at the season opener in Pomona. Coughlin kicked off the season by winning his 64th Pro Stock race. In the final, Coughlin ran low elapsed time of the event with a 6.522 to cover Line’s 6.565 effort. Coughlin began the event by qualifying No. 1 with a 6.525.

2020 Indy Winner: Jason Line Following a four-month delay due to the COVID-19 pandemic, Line and Coughlin met in the final round for the ninth and (most likely) final time at the E3 Spark Plugs NHRA Nationals held at Lucas Oil Raceway at Indianapolis. Line got off the starting line first, .017 to .022, and never trailed with a 6.647 to 6.658 victory. The win was the 51st for Line in Pro Stock and barring a change of heart, will stand as his last victory as a NHRA pro. 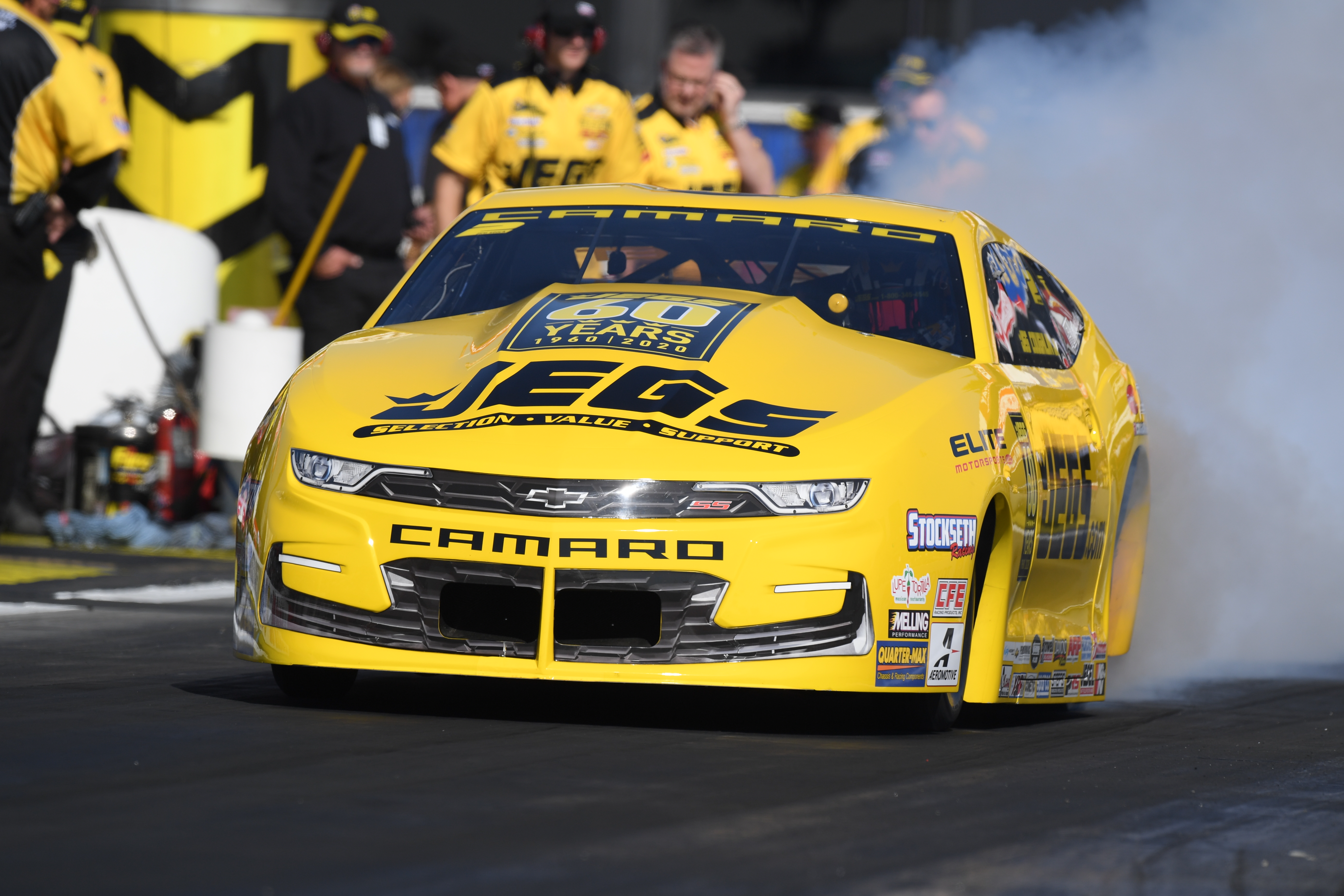 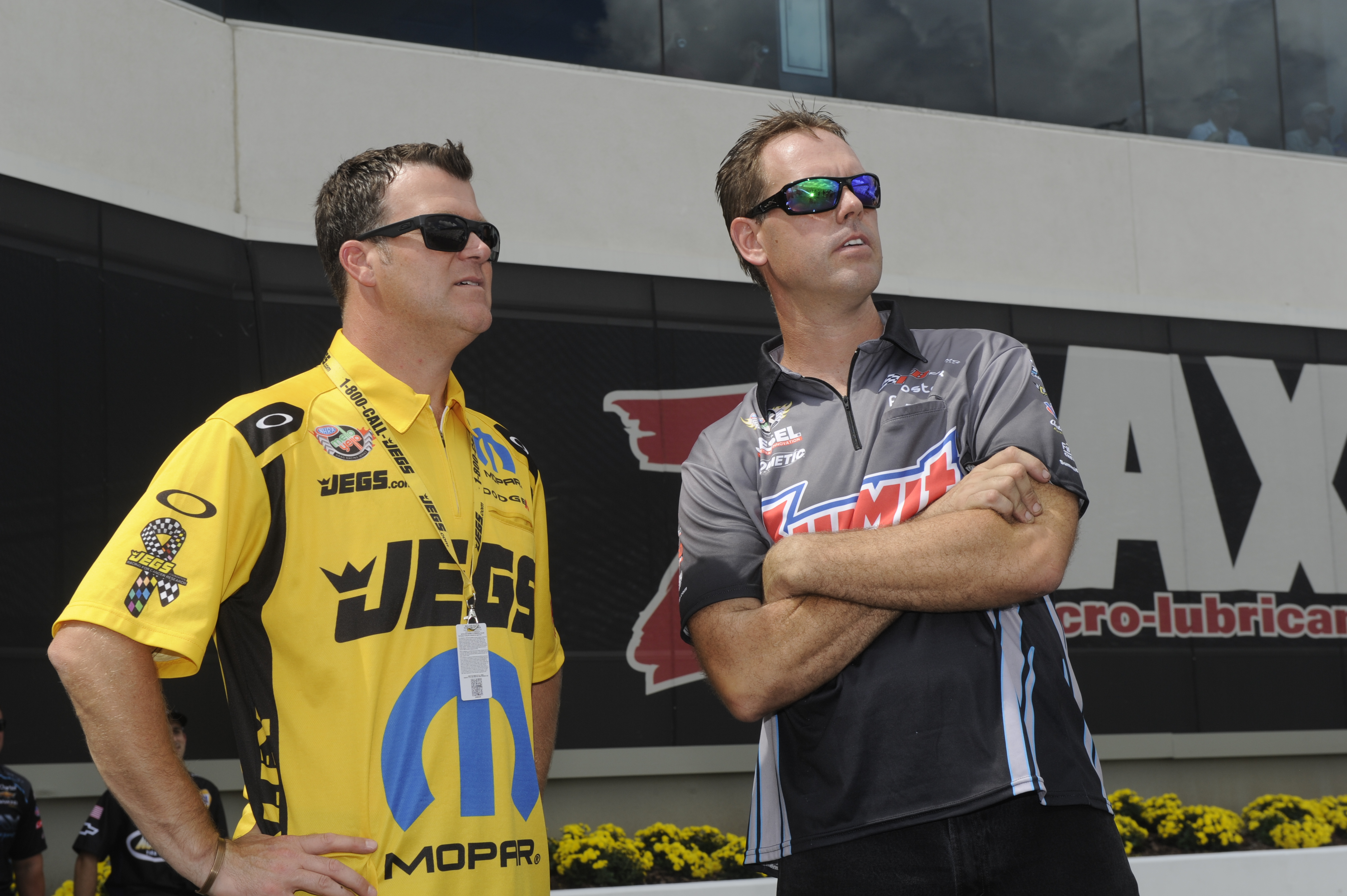 Coughlin's and Line’s wins are capturable in the data on this page, but their contributions go much further. Both came into Pro Stock with a passion for learning and competing; Coughlin with a bias toward driving, Line with a lean toward building the machine. Both maintain NHRA competition licenses, and we expect to see Line race his Buick GS and Coughlin competing in high-stakes bracket races for years to come.

Line’s contributions at KB Racing will only increase, as building winning race programs for others becomes his focus. His teammates can, and will, expect more power from their DRCE Pro Stock engines for 2021. Customers in other classes will get to leverage his experience too. He’s proven he can apply his philosophy of horsepower and reliability to any powertrain. Though we may not see him at every Camping World Series race in 2021, his engines will be rumbling into the staging lanes every race weekend.

Coughlin’s race efforts continue as well, he maintains licenses for nine different classes of racecar, from Pro Stock to Super Street. His skills can’t be crated up and sent to a customer as easily as Line’s, but there’s not a racer out there who can’t learn from him. When asked if he would coach the next generation of drivers, he admitted that teaching his winning ways isn’t as easy as he’d like. To document his process for doing a burnout and staging a Pro Stock car once took him two hours. Until the Jeg book on drag racing gets written, suffice it to say that studying his process from suit up to winner’s circle routine is a master’s class in racing.