With his Pro Stock victory at the Dodge NHRA Indy Nationals presented by Pennzoil, Jeg Coughlin moved into a tie with Top Fuel great Tony Schumacher for the No. 8 spot on NHRA’s all-time wins list with 84 victories. Both are just one win behind Pro Stock legend Bob Glidden. 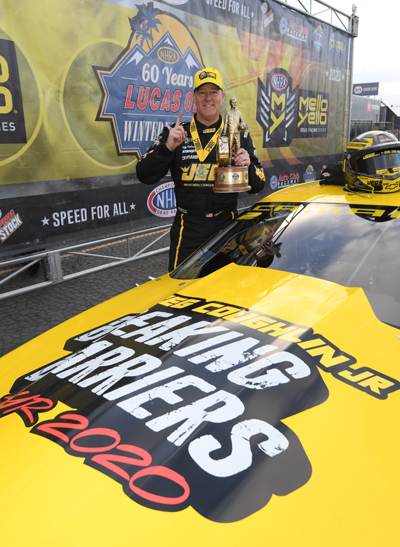 Sixty-five of Coughlin’s victories, including two already this season, have come in the Pro Stock class –- where he ranks fourth all-time in wins but  a class from which he will retire at season's end -– and he also has collected 19 others wins for a combined total of 84 victories in an NHRA-record seven different classes.

“It seems like only yesterday we were all cheering for Bob Glidden to get his 85th win, and to be on the heels of matching someone of his greatness is very cool,” said Coughlin. “Obviously, unlike Bob, not all of my wins have come in Pro Stock, but it’s still very cool.”

As Coughlin noted, all of Glidden’s wins have come in Pro Stock –- where Coughlin in ranked fourth all time -– but anyone who knows anything about drag racing cannot dismiss the difficulty of also winning in the Sportsman ranks.

“We joke that you take the Sportsman wins and you double them," said Coughlin, maybe only half joking. “It is very difficult to win a Sportsman event and I’ll even say that it’s a bit tougher because it’s not performance-based like the Pro classes. Right off the bat your percentages go down because you’re typically having to win six, seven, and sometimes eight rounds and you have to drive both ends of the racetrack.

“However you want to look a the numbers, I’ve look back and I’ve had a fantastic career, have won a lot of races and have been fortunate to win some championships, and I’m not doe yet. This will be my last season in Pro Stock, but not my last season racing, so who knows what the future holds.”