Jack Beckman won the Lucas Oil NHRA Winternationals in Funny Car for the first time in his career, and his Infinite Hero Dodge Charger SRT Hellcat team is poised to do a lot more of it.
14 Feb 2020
Jacob Sundstrom, NHRA National Dragster Associate Editor
Feature

Jack Beckman won the Winternationals for the third time in his career on Sunday. This Wally meant more because it came at the 60th Lucas Oil NHRA Winternationals, because it came against John Force, and because he sounded half-dead all weekend. Nitromethane does not serve as a replacement for antibiotics nor a cure to the common cold — much less what Beckman fought off while defeating the greatest Funny Car racer to ever live.

The win matters because it's why Beckman cared enough to show up all weekend. That and the check, which Beckman cheerfully reminded everyone he's lucky enough to receive to drive a race car in a way that feels authentic. His authenticity may be his defining personality trait; it's something he shares with the crew of his Infinite Hero Dodge Charger SRT Hellcat. 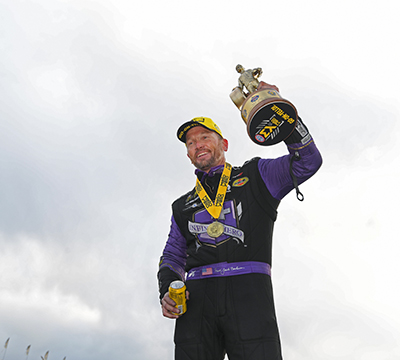 That Hellcat looks like championship material. The winner of the Winternationals is no more likely to win the championship than anyone else (we've covered this before), but Beckman came damn close to winning his second Funny Car world championship in 2019. Robert Hight had the best car over the full season, but he fought off a pair of Don Schumacher Dodges during the Countdown, including Beckman and Matt Hagan.

Both of those Hellcats roared back to life in Pomona. Hagan captured pole position, and Beckman won the race after attacking the early portion of the racetrack. Beckman averaged the best reaction times of the meet (.0670-second) to go alongside the best 60-foot times (.862). That came after a thorough test session at The Strip at Las Vegas Motor Speedway, where the Infinite Hero team tested various clutch discs, a backup intake manifold, a different supercharger, a backup injector, new E3 spark plugs, new Weld wheels and sticker Goodyear tires.

"Once in a while, you'll chunk the intake manifold," said Beckman. "Well, you can't just have one backup of each, you gotta hit the road with at least three superchargers, three intakes and three injectors. So, what we'll do, typically if we haul ass on Friday, Saturday we'll try a new clutch disc or a backup injector or backup pressure plate, something like that. We just wanted to  make sure going into Pomona that we had an apple-to-apple comparison on those parts."

Those did not directly factor into the team's victory in Pomona, as Medlen and Antonelli effectively (though likely not literally) put the Auto Club NHRA Finals winning car back together and made eight laps to get Beckman and company another Wally. Testing in Las Vegas, for the Infinite Hero team at least, was about getting a read on backup parts and pieces in addition to fine-tuning the clutch discs that will be used throughout the remainder of the season.

The purple Funny Car leads the field to the 660-foot mark over the last six races, averaging .873-second to 60-feet and 1.373 from 60 to 330-feet. The Don Schumacher Racing machine also holds the best average time to the final incremental (660-1000 feet), a .745-second average. Hight, tuned by Jimmy Prock in the Auto Club Chevy Camaro, reigns supreme from 330-660 feet. It's worth noting how tight the field is when you bunch the top cars together. Beckman's name may be at the top of the marquee, but we're talking about thousandths of a second.

If all of that seems ... well, like too many numbers, I get it. Here's something a little easier to digest:

It's very close in Funny Car, which is why I said I don't know what's going to happen this season. I still don't, because we've only raced *one* time. Beckman's crew has done real damage in the early part of the racetrack without creating big speed, which is at least interesting and appears to be similar to the approach Venables is taking with Hagan (the latter being something I never expected to write).

There are so many great Funny Cars in competition that it doesn't pay to get over your skis. We'll head to Phoenix in two weeks and see what Bob Tasca III, J.R. Todd and Ron Capps have up their sleeves. Oh, and then there's the ROKiT Funny Car driven by Alexis DeJoria — not to mention the Blake Alexander / Jim Head Funny Car we haven't even seen yet.