When 2018 Mello Yello Funny Car world champ J.R. Todd rolls into Friday night qualifying at this year’s Lucas Oil NHRA Winternationals, the driver of the DHL Toyota won’t be defending his Mello Yello title, but he still has a crown to defend: the king of NHRA’s Prime Time qualifying program.

Launched in mid-2018 at the Lucas Oil NHRA Nationals in Brainerd, NHRA Prime Time qualifying has been a huge hit with both racers and fans. The program allows Top Fuel and Funny Car drivers to pick an introduction song to be played before they fire their cars for the Friday night session (drivers choose the snippet to be played, either some good lyrics or a great riff). The picks have ranged from mild to wild and reflected everything from favorite songs to location to state of mind, but in this multi-genre-loving reporter’s eyes (your mileage may vary), no one did better in 2019 than Todd, who leaned heavily on the geography to get the fans engaged.

Songs like “Viva Las Vegas” (albeit the Dead Kennedys' version and not the better-known Elvis version) for the Denso Spark Plugs NHRA Four-Wide Nationals were naturals, but he also showed off his diverse taste with Glen Campbell’s country-themed “Rhinestone Cowboy” for the two Texas races and John Denver’s "Rocky Mountain High" for the Denver event and hit home runs with fans with Laura Branigan’s disco hit “Gloria” in St. Louis, where it was the locker-room theme song for the Stanley Cup-winning St. Louis Blues hockey team, hometown legend Nirvana’s megahit “Smells Like Teen Spirit” in Seattle, Minnesota’s musical magician Prince and chart-topping “Let’s Go Crazy” in Brainerd, and the Dropkick Murphys’ “I'm Shipping Up to Boston" for the Epping event. Then, of course, there was “Rocky Top,” every Tennessean’s favorite song, in Bristol.

“I’m a fan of all kinds of music, so I had a lot to play with,” he said. “If you looked at my iPod from back in the day you would have seen a wide variety of everything. I tried to do a lot for the fans -- I wanted to pick songs that people would understand why I picked them --  with ‘Gloria’ in St. Louis for the Blues finally winning the Stanley Cup – one of my sprint-car buddies got me into watching hockey and into liking the Blues – but Bristol was my favorite one.

"I could really hear the fans getting into ‘Rocky Top’ when they played it. At Indy, I picked ‘Small Town’ by John Mellencamp because we’re both from Indiana and I’m from a small town, so it really meant a lot to me.

“I used up a lot of the obvious ones last year, so I’m going to have to pick up my game. I’m a huge Foo Fighters fan so you might hear from them. I try to keep my picks a secret from even my crew, so you’ll just have to wait and see what I come up with this year.

“I think it’s a great addition to the show. I try to listen to what everyone else is doing and you can kind of read their personalities by the songs they pick."

YOU SHOOK ME ALL NIGHT LONG 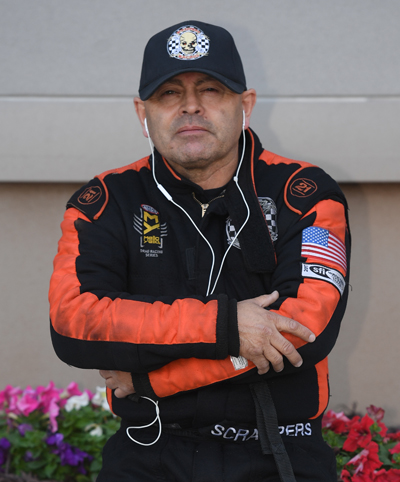 Top Fuel’s Mike Salinas played to his generation with a series of great oldies like the Rascals’ "Groovin’,” Creedence Clearwater Revival’s "Run Through the Jungle,” The Beach Boys’ "Little Deuce Coupe,” Steppenwolf’s classic "Born to Be Wild," and Jimi Hendrix’s “Purple Haze” and tugged on heartstrings with the Temptations “My Girl,” which he dedicated to his wife, Monica, and El Chicano’s “Sabor A Mi.”

“Most of the songs were what I grew up on, but ‘Sabor A Mi,’ which I played at the Finals, was my mom’s favorite song – she passed away a few years ago and I remember her dancing with me to that song – and ‘My Girl,’ which I used in Norwalk was because Monica was going back to college at Harvard for almost a month to finish up her Master’s Degree and I wanted to let her know I was going to miss her. We’ve been together for 40 years. She’s the one who picked ‘Purple Haze’ for Reading because that was the song I played for her in my ’55 Chevy on our third date. All of the songs I picked meant something to me.” 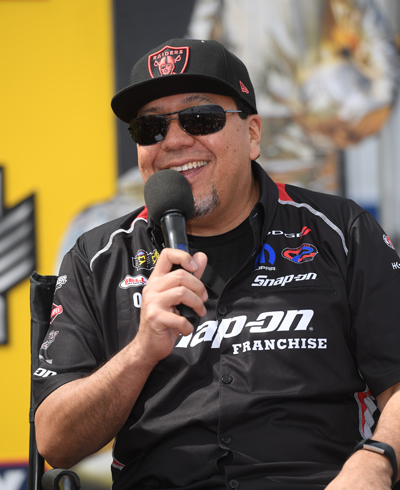 Classic soul tunes like Curtis Mayfield’s “Superfly,” James Brown’s “The Big Payback,” and Stevie Wonder’s "Superstition" were mixed with soul-disco fusion (Ohio Players’ “Love Rollercoaster,” Rick James’ “Super Freak,” and Earth, Wind and Fire’s “September” – for Indy, of course), and then went a little bit rock and roll with one-hit wonder King Harvest’s "Dancing in the Moonlight" (perfect song for night qualifying). The avowed Oakland Riders fan also went with the Raiders theme song for the event in Las Vegas, where the team will play next season and reached into his Hispanic heritage with Santana’s “Oye Como Va” and Legado 7’s "En Los Ángeles Me Miran" for last year’s season opener in Pomona.

“I’m all over the place,” Pedregon admitted of his choices. “They’re all mine though; I think some of these guys have their kids pick the songs for them. I’m no spring chicken so I have no business playing 2018 rap music; that’s not my thing. I’m a soul guy. I love the oldies. Music is my thing.

“Southern California has so many songs about it, but I have a good one coming up for this weekend, a real surprise. I like to pick my songs in a way that has to have something to do with the area or some really good music. I’m not really a lyrics guy, so I go with songs that I like the sound of the music itself.”

Pedregon couldn’t resist throwing down a bit of a gauntlet for the year ahead.

“I think I’m really going to turn some heads this year with some of my choices. I have no qualms about showing all sides of the real me, even if it’s a Diana Ross song. Some of these guys who are picking these hard-edge rap songs probably listen to Barbra Streisand at home.” 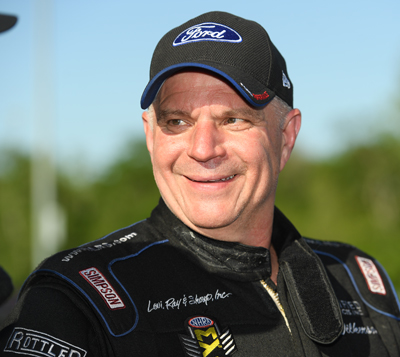 Todd gave props to Tim Wilkerson for picking “Weird Al” Yankovic’s “Amish Paradise” in Reading (“I don’t know if I would have had the stones to play that,” Todd remarked, “but I thought it was awesome and started laughing as soon as I heard it.”) but Wilk was pleasantly adept with his song choices.

Among the favorites were Cleveland Rocks” (aka The Drew Carey theme song) for the Norwalk event and The Beach Boys’ “California Girls” for Sonoma, then some Pearl Jam (“Even Flow”) for Seattle, Blake Shelton’s “God’s Country” for Denver, and Montgomery’s Gentry’s "This is My Town" for his “hometown" St. Louis event. He showed some real musical chops by picking Bachman-Turner Overdrive for Brainerd (the band is originally from neighboring Winnipeg) and their hit "You Ain't Seen Nothing Yet," and cracked up everyone with Big and Rich’s “Save a Horse Ride a Cowboy” for Dallas and the aforementioned “Weird Al” tune for the event contested in the heart of Amish country in Dutch Pennsylvania.

"Basically, I started out the year just doing stuff that I liked -- crazy, radical stuff [like Bullet For My Valentine’s “Your Betrayal” for the first six races],” said Wilkerson “Then I got to thinking, ‘Well, let's do more stuff for the region instead of just for me. So that's how I came up with using "California Girls" in Sonoma, Pearl Jam in Seattle, stuff like that. Sometimes my kids would give me ideas, but most of the time it was just me. I like music so I was kind of into it."

Noted nitro musicologist Ron Capps led with Pennywise’s "Bro Hymn" for a long stretch and some Dr. Dre stuff before settling into Sweet’s “Fox on the Run” as a tribute to the late race promoter Bill Doner, who gave the world the “Fox Hunt” drag race.

THE SONG REMAINS THE SAME

Some drivers stuck with the same song all year. Top Fuel newcomer Cameron Ferre went the entire season with Refused’s “New Noise,” whose lyrics -- "How can we expect anyone to listen, if we’re using the same old voice. We need New Noise." –- maybe were a mantra to him while Scott Palmer went the whole season with "Would?” by Alice in Chains and Doug Kalitta stood with Metallica’s "Enter Sandman" from Pomona to Pomona.

Through his 17-race schedule, Billy Torrence hung with his good ol’ boys from Texas, ZZTop, and the catchy “a-haw, haw, haw, haw” from their hit “La Grange” while his son, Steve, opened the year with NHRA fans Godsmack and “I Stand Alone” but switched to George Thorogood’s smack-talking “Bad To The Bone” beginning in Topeka.

Similarly, Funny Car world champ Robert Hight spent most of the season with the Eagles’ “Life in the Fast Lane”  (great title) then got aggressive in the Countdown by switching to B.T.O.’s “You Ain’t Seen Nothing Yet” starting in St. Louis.

YOU REALLY GOT ME 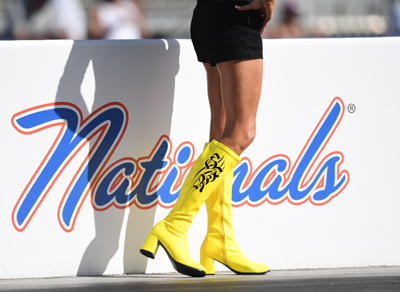 There was a lot of other creativity on display. Funny Car racer Bob Bode, whose wife, Alice, backs him up after his burnouts wearing tall go-go boots, went with Nancy Sinatra’s famous "These Boots Are Made for Walkin' " while the fabled “Greek,” Chris Karamesines went with Frank Sinatra’s classic “My Way,” certainly an appropriate song for the sport’s eldest statesman. Mustang pilot Bob Tasca III earned props with the western-tinged "Old Town Road" by Lil Nas X.

John Force was, of course, a star, too, wearing his heart on his record sleeve by switching between Johnny Paycheck’s classic "Take This Job and Shove It," George Jones’ "I Don't Need Your Rocking Chair,” and Elton John’s "I'm Still Standing."

The competition begins anew in Pomona. Tune in and listen. You never know what you’re going to hear!