The history of the Summernationals

When NHRA staged the Lucas Oil NHRA Summernationals last weekend in Indy, it resurrected one of the most storied event names in NHRA history. Here's a look back at the 50-year history of the NHRA Summernationals name.
24 Jul 2020
Phil Burgess, NHRA National Dragster Editor
DRAGSTER Insider 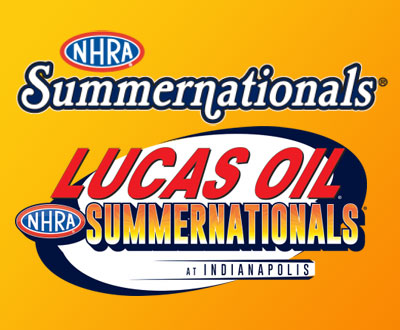 Two events into NHRA’s monumental Return To Racing during the COVID-19 pandemic, a rebirth that continued with last weekend’s Lucas Oil NHRA Summerationals in Indy, I’m reminded of the longstanding Summernationals-related pun that was already well entrenched in the National Dragster offices before I even arrived there decades ago: “Summernationals, and some aren’t.” On the slim chance you didn’t “get it,” it’s a play on “Some are Nationals, some aren’t,” and a cheeky reference to some national events somehow being “better” or more worthy than others. In its most “famous” usage, I remember a headline crowing “Summernationals, and some aren’t. This one was.”

The return of the Summernationals name — a mainstay marquee for nearly 50 years — to the NHRA lineup in Indy added another chapter (and another venue) to one of the most storied event names in the NHRA annals.

Long associated with the since-shuttered New Jersey mecca of speed that longtime fans and racers simply called “Englishtown” — Old Bridge Township Raceway Park (nee Madison Township Raceway Park), which actually was not even located in the city of Englishtown, N.J.,  yet had an Englishtown mailing address because that post office was closer than the Old Bridge annex — the Summernationals event name has now bounced around to four different venues since it joined the schedule as part of NHRA’s “Super Season” in 1970.

Although Englishtown became synonymous with the event name, the first Summernationals were actually held at York U.S. 30 Dragway in York, Pa. Announced by NHRA in August 1969, the Summernationals, the Gatornationals, and the Supernationals all joined the NHRA schedule for the 1970 season, boosting the calendar from four events to seven events.

Staged July 18-19 at the track located about an hour east of the famed Gettysburg Civil War 1863 battleground (ironically, a battle also staged in July), the first Summernationals went off with nary a hitch, and the National Dragster race report was, well, interesting.

"In an area rich with historical background, the National Hot Rod Association produced its first annual Summernationals drag racing championships at York U.S. 30 Dragway. Almost two centuries ago, the sound of musket fire broke the silence in the rolling green countryside, while a little over 100 years ago, a gentleman named Lincoln made his famed Gettysburg Address not too far from the dragstrip. However, the weekend of July 18-19 found the placid tranquility broken by a new and exciting sound, the noise of 1,500-horsepower fuelers and Funny Cars on down to the shrill hum of a highly-modified Volkswagen, Yes, drag racing, NHRA style, had come to York, Pennsylvania.” 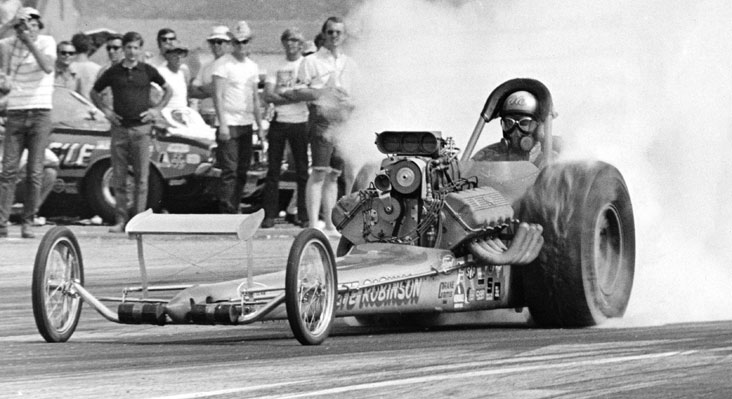 “Sneaky Pete” Robinson won Top Fuel on a bye run after low qualifier (6.72) Jim Nicoll was unable to fire his dragster for the final round after an engine-expiring, low e.t. blast of 6.71 in the semifinals. It was Robinson’s first big win since the 1966 World Finals and the last before his passing in a wreck at the Winternationals the following February.

Gene Snow won Funny Car, running a sizzling 7.20 at 214 mph in beating Phil Castronovo in the semifinals and then a 7.27 in the final round to defeat Vic Brown's 7.47 in Gary Richards’ New York-based "Black Shadow" Mustang. 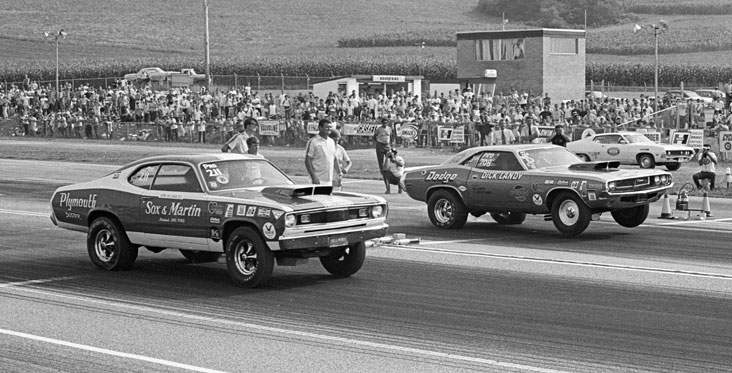 1970 was also the debut season of Pro Stock, which went over just fine with the doorslammer disciples of the East Coast, and nearly 60 drivers tried to make the 16-var field, which sported an impressive 10.19 bump spot and Dick Oldfield in the No. 1 spot at 9.93 in his "Motown Missile" Dodge Challenger. Californian "Dandy Dick" Landy ended up the winner over red-lighting Herb McCandless at the wheel of the Sox & Martin team Plymouth Duster. 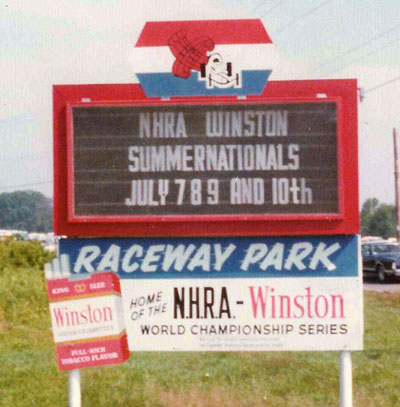 The Englishtown Summernationals were epic. It was one of the first events to hold nighttime qualifying, a virtual necessity due to the region’s sweltering July climes. Many a fan and racer were sent swooning but the heat and humidity, most famously 1971 Top Fuel runner-up Jim Harnsberger, who almost passed out due to heat prostration working on his car before the final. He was whisked to the hospital — against his wishes — in an ambulance but talked the ambulance crew into bringing him back to the track, and he watched Arnie Behling solo to the win. (Behling's win was just the second with a rear-engined Top Fueler, after Don Garlits' win at the Winternationals that year.)

So many incredible things happened in E-Town in those 20-plus years. Judi Boertman beat husband Dave in the 1971 Stock final in the first intra-couple final round in NHRA history. Jeb Allen won Top Fuel at the 1972 event at the tender age of 18 years, one month to become NHRA’s youngest Pro winner, a title he held for 45 years until Tanner Gray — 17 years, 11 months — won Pro Stock at the 2017 spring Las Vegas event. East Coast Funny Car hero “Jungle Jim” Liberman won his first and only NHRA Wally at the 1975 event. Someone (Mark Oswald, in the Candies Hughes dragster) finally broke Garlits’ near-seven-year old (2,470 days, to be exact) 5.63 national record with a 5.61 at the 1982 event. Four years later, Garlits had the world’s most famous blowover at the ’86 event. Kurt Johnson made the first six-second Pro Stock at the ’94 race. The list could go on and on.

So, even though NHRA continued to hold national events in Englishtown, the Summernationals name went away in 1993 when the event was moved from sweltering July to May, which meant that it leapfrogged ahead of the Columbus, Ohio-based Springnationals on the calendar and, well, we just can’t have summer before spring, right?

The event became the Mopar Parts Nationals and stayed that way until 2000, when Matco took over sponsorship of the E-Town event. At that point, the race became the Matco Spring SuperNationals (because Matco already sponsored the late-year, unseason-named SuperNationals in Houston).

(Even though NHRA has stopped using the Springnationals name for the Ohio race in 1996, when Pontiac became the sponsor of the Pontiac Excitement Nationals, the E-Town event was in May and summer doesn’t begin until June 21, so do the math. The Spring Nationals — two words — resumed in 2002 in Houston. But I digress.)

After a 10-year hiatus, the Summernationals name returned to the NHRA schedule, now attached to the Topeka event, but at least it also was two words — Summer Nationals — to help preserve a bit of the original event’s integrity. The Summer Nationals remained in Topeka for 12 years, until 2013, when the event was rebranded as the NHRA Kansas Nationals.

The Englishtown event had carried on as the Supernationals under a variety of sponsorships — K&N Filters, ProCare Rx, United Association, and Toyota -– but the Napp family wasted no time immediately reclaiming the name — as one word — for the 2013 event with continued backing from Toyota, and all was well and right again in the NHRA universe until the facility got out of the drag racing business and into the car-storage business in early 2018, breaking hearts up and down the Jersey Shore and, indeed, across the NHRA universe. 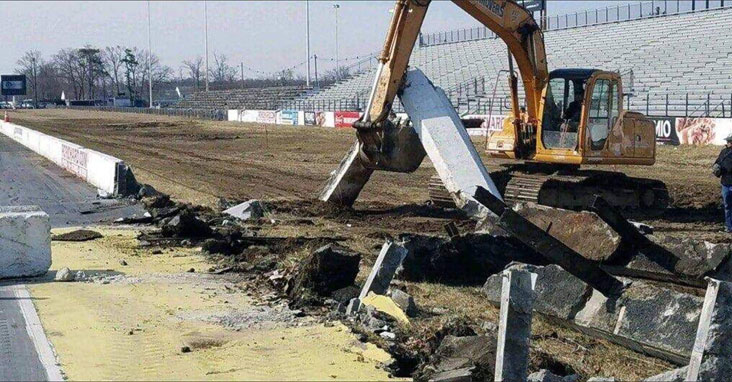 As we already know, the Summernationals is back with the running of the Indy race last weekend. It’s too early to tell if the event name will be adopted again by someone in 2021 (honestly, can anyone accurately predict anything that will happen in 2021?), but even if it was just a one-year Summernationals, it was some Summernationals.

From an historic standpoint, the event marked the first time in NHRA history that two different national events had been held at the same racetrack on consecutive weekends, coming on the heels of the E3 Spark Plugs NHRA Nationals at Indy just days earlier. It also was only the third time the fabled Indy facility has held more than one national event in a season — it hosted the U.S. Nationals and the SPORTnationals in 1983 and 1984 — but the first hosting all of the Pro classes twice in one year. 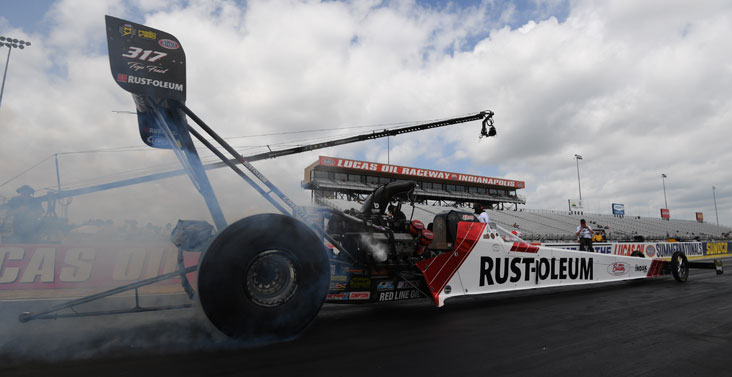 Even though rain has pushed the final rounds of that race until the Denso Spark Plugs U.S. Nationals, history is assured as either T.J. Zizzo or Justin Ashley will win their first NHRA Top Fuel Wally. The last time that we had two first-time Top Fuel finalists was in 1997 when eventual winner Cristen Powell dueled with Bruce Sarver — ironically, in Englishtown.

The Lucas Oil Summernationals will also be part of more trivia in the weeks ahead. In two weeks, Indy will host a third event — the newly-announced Dodge NHRA Indy Nationals — making the facility just the second to host three events in one year. During NHRA’s 50th anniversary season in 2001, the similarly fabled Pomona racetrack held its traditional Winternationals and World Finals, plus a summertime spectacular, the Pep Boys 50th Anniversary Nationals.

And, of course, the Indy track will make history — and the Summernationals will be a part of that equation — when it hosts its fourth season event, the prestigious U.S. Nationals, in late August/early September, making it officially the busiest national event venue in NHRA history.

Some are Nationals and some aren’t. The Summernationals always will be.