Get To Know: Brian Lohnes

Many of you see his smiling face alongside Tony Pedregon during NHRA on FOX race broadcasts and because you're seeing him a lot here on NHRA.com during our unscheduled 2020 intermission, here's the story behind lead announcer Brian and where the heck he came from.
14 Apr 2020
Brian Lohnes, NHRA on FOX announcer
Feature 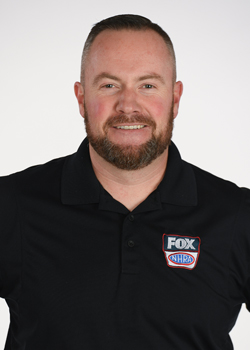 Since many of you out there tune in to see the smiling faces of both Tony Pedregon and I during NHRA on FOX race broadcasts and because you’ll be seeing me pretty frequently here on NHRA.com during our unscheduled 2020 intermission, it seems to be the right time to let you know who the heck I am and where the heck I came from.

My story is the same as so many other drag racing enthusiasts in that I grew up with a drag racer/hot rodder dad. He did most of his racing before I was born but cars were always a part of life growing up. He resorted a 1964 Pontiac GTO (389, single 4-barrel, four-speed) car when I was really young and we cruised it all over the place. He still has that car today.

We watched TNN religiously on Sundays (except for the rodeo broadcasts; just not our speed) and that’s where I truly fell in love with and became obsessed with the sport of drag racing as a kid in the first half of the 1980s. As I got older it was all about cars, monster trucks, drag racing, and horsepower. I read all the magazines, took apart the lawnmower -- all the typical stuff. 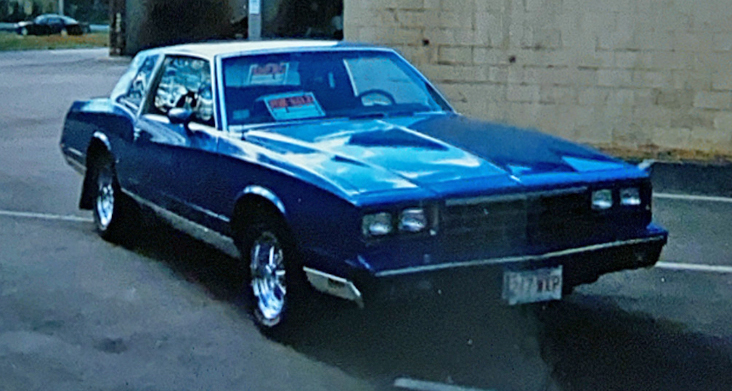 Here’s my first car. This gleaming blue beauty was slower than a barge and had a dark brown interior. Ballin’ on a budget, late-1990s style.

My first car was a 1984 Monte Carlo that I inherited from a great aunt who had passed away. I was 15 when I got the car and had been saving money. It was powered by a 305-cid small-block Chevy and had a Quadrajet four-barrel on it. The car was two-tone brown and I had a guy paint it 1968 Ford Acapulco blue. The interior stayed the factory brown, so it was quite a combo. A set of Cragar S/S wheels, some bolt-on hop-ups. and I was the man! I was not the man but when you are 16 and have a car with a V8 in it, life is pretty good. 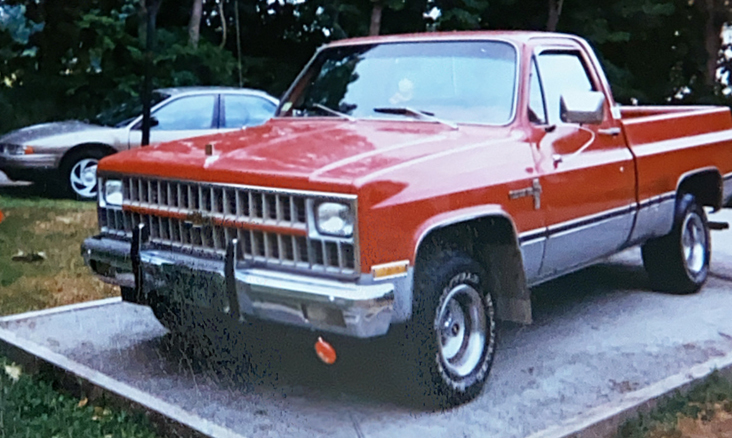 This pickup truck is the first thing I ever drag raced. With a tall rear gear, a tired 305 engine, and a four-speed stick, it ran 19s.

That car got replaced by a 1982 Chevy truck when I was 17. The C10 had a small-block Chevy and a four-speed manual transmission. Boy, if I could have that one back again! The “square body” GM trucks are in such high demand today and that one with the four-speed was just weird enough to be kind of rare. Believe it or not, this truck is the first vehicle I ever drag raced. Bone stock with some 165,000 miles on its tired little 305 and packing a Bonneville tall rear end ratio, the truck went 19.70s at just over 70 mph, crossing the traps in third gear. Those first test and tune nights at New England Dragway changed my life, literally.

My dad and grandfather operated a pallet and box business for 45 years and when I was a kid I would work there on Saturdays (along with my other jobs). After a couple weeks of Friday night test and tune action, I finally got the guts up to show my dad the time slips. He chuckled at the awful elapsed times and reaction times but didn’t chew me out. In fact, he was kind of interested in what was happening. That’s when I saw my opening.

We called it “Cheaper Than Yours” and it was $1,600 of total investment to run 13s in the late 1990s. My high school buddies along with my dad built this car in my parent’s garage.

Knowing that dad was into this whole scene and that he was clearly interested in going back to the drags on the regular I hatched a plot with my fellow high-school senior friends Brian Franey, Dana Chandler, and Brian Antonellis. The four of us each put $400 in, giving us $1,600 smackers in 1998 money. We bought a 1984 Pontiac Firebird with a blown-up V6, a 1979 Caprice with a swapped in 350 (4-bolt main!), a refreshed transmission out of David Keenan’s unfortunately wrecked Camaro, a 3.73 ratio Posi-traction IROC rear end out of the junkyard, and set to work. Oh, I asked for an intake manifold and camshaft for Christmas as well. Another guy came up with the headers, and we made automotive stone soup. The last piece of the puzzle was getting a free set of McCreary used circle track slicks to run the car on. We built the car in my parent’s garage. (They are saintly)

The agreement was simple. The other guys could run the car on Wednesday, Friday, and Saturday events but Sundays were for me and my dad to go bracket racing. The car was awful looking with junk white paint and our paw prints all over it but it ran in the 13s by the time it was all said and done and it was faster than lots of the other test and tune night stuff. We had a riot. At the end of the summer, we took the whole thing apart and guys sold the various pieces to get some of the money back. We all went our separate ways to college and trade school. That was bittersweetly, that.

Here’s me in 1999 in the first real race car I ever drove. My dad still runs this car today. I drove so well I became an announcer.

Less than six weeks later I got an envelope in the mail from my mom and dad and in it were Polaroid photos of the Nova you see here. It was a complete surprise and shock. One of the happiest of my life.

The car was bought as a roller. Dad and I stuffed a small block in it that we built using a P.A.W (Performance Automotive Warehouse) kit and went drag racing. The car sits like a four-wheel-drive because it previously had a big block in it and we did not change the springs. That was remedied later. I drove that car for a few seasons going increasingly faster as we built better engines when the previous plants expired.

Did I win anything? Heck, no. Did I have fun? Oh Lordy, yes. After a couple of seasons there was a thing that happened, though.

I started working at the track and sneaking up to the tower when my shift in the tech dept was done, announcing for the rest of the night. Instantly I had found my true place at the dragstrip. It was not long before I’d ride to the track with dad, he’d go race the car and I’d work in the tower as the announcer and then as the announcer and race director on Sundays at New England Dragway. 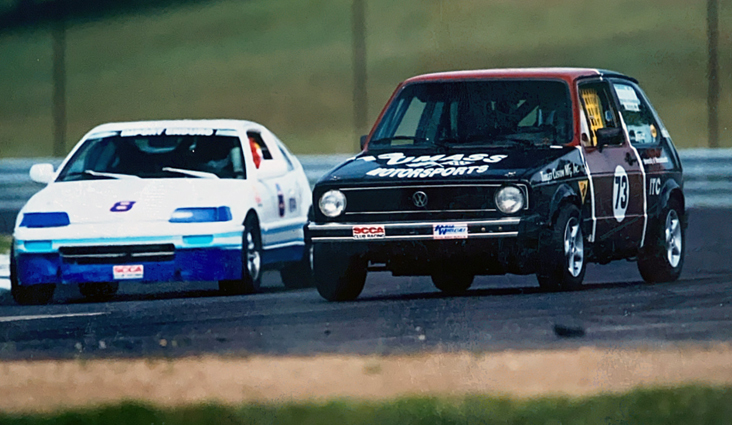 In college, I fell in with some road racing guys and we got the college to sponsor our racing team and activities. That little VW was our pride and joy.

During this time, I was going to college as well and fell in with a group of guys who were road racing enthusiasts. We got together, formed a club, and somehow got the University of Massachusetts to fund our racing program! We ran this little VW Rabbit all over creation and I also started announcing SCCA road races as well. I learned road racing the hard way and still am enthusiastic about it to this day. Plain and simple, I love things with tires on them. 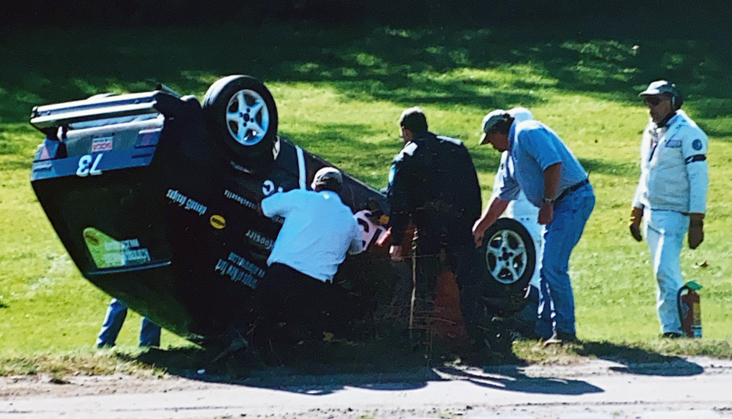 Things rarely went according to plan when we were at the track.

During college I was also working at Lebanon Valley Dragway as their Saturday announcer and, after a year or so, I was working at Lebanon on one night of the weekend and driving to New England Dragway to work the next one. It was at this time that track manager Joe Lombardo caught me sleeping in my truck, gave me a gate key, and I began sleeping in the tower each week. I did that until I got out of college (and sometimes after). No, my grades were not all that good! 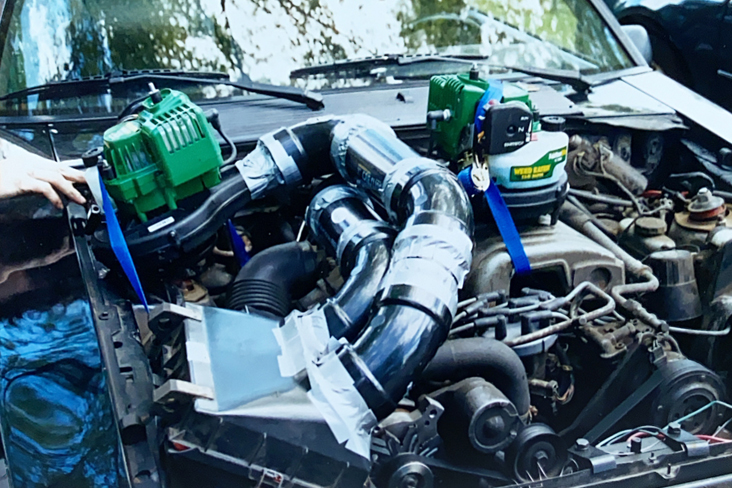 I did not take any science classes during my journalism school career, but that doesn’t mean my life was lacking for experiments. Yes, we really did this in about 2000 and drove it around campus.

The red truck was my pride and joy in college and with a refreshed crate motor in it, the pickup ran pretty good. I snuck out of the booth one Saturday at Lebanon Valley Dragway and made grudge runs with the truck, taking my road racing friends for rides.

From that point forward, I got hitched up with the IHRA and began to travel with them, working regular jobs in trucking, logistics, and other roles, and all the while freelance writing for car magazines and announcing as many drag races as I could. My years with IHRA were great and in 2013 my big break with NHRA came at the first NHRA New England Nationals at my home track in Epping. I had a tryout there and came out on the NHRA tour in 2014. From that point forward, it has all been whirlwind, but that’s what makes life fun. My dad is an active NHRA sportsman drag racer competing both in the same Nova you see in these photos and a second faster car he added to the fleet a few years back. I take credit for dragging him back in the fold!

So long story short I am a hack mechanic and a crummy drag race driver. However, I am one heck of an enthusiastic supporter and student of the sport. That’s the short version of the story. If you want the long one, buy me a beer.