In its first 10 years, National Dragster changed editors the way that Roland Leong used to change drivers: Frequently and often with little notice. From 1960 through 1969, the name atop spot the magazine’s masthead changed 11 times among nine different leaders before Bill Holland’s five-year run (April 1969-July ‘74) and the seven-year reign of Jim Edmunds (October ‘74 through December 1981). 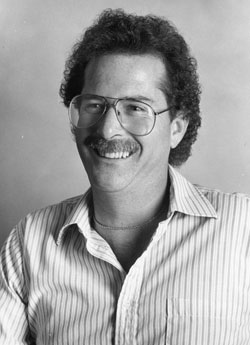 We lost Jim last Saturday after a prolonged illness and long decline in health and it’s a personal blow to those of us who knew, worked with, and loved Jim.

Regular readers of this column have over the years read Holland’s remembrances of his years in the sport and at ND, and so the two of us commiserated over email on the loss of another of the brotherhood of those who shared the title of National Dragster Editor. Most recently, in late December 2015, we lost George Phillips, who served that position for a few years in the early 1980s right after I got there and before I took over the reins from him in 1986 and, before that, we lost ND’s first Editor, Dick Wells, in January 2010. Steve Evans, best known as the well-loved reporter and co-host of NHRA TV shows for more than two decades, passed away unexpectedly in November 2000; he had served two stints as ND editor: 1966-67 and, as Holland’s predecessor, in 1968-69.

Holland and I are members of a dwindling club. It had been a dozen years since I last spoke to Bruce Tawson, who took over from Wells in late 1960 and became ND’s second editor before leaving in 1961 (“For some reason, I lost my mind and joined the Army to serve my country,” he told me. “Left the best job and best boss, Wally Parks, I ever had.”), which led to Wells’ second stint through 1963, but I heard back from Bruce last night that he's still with us. Yay. Mike Doherty -- who was the editor for parts of 1967 and ’68 before going on to change drag racing journalism as we know it with Drag Racing USA magazine -- is reportedly still alive, according to Steve Reyes. I’m not sure of the others (Cec Draney, Dean Brown, Bruce Young, Lane Evans, and Joe Rusz.)

Anyway, back to our good buddy, Jim.

Edmunds came to NHRA in 1969 through his connection with longtime NHRA competition czar Steve Gibbs. Edmunds was a journalism graduate of Mt. San Antonio College in Walnut, Calif., where he reported on sports for the school newspaper, The Mountaineer, with future ND colleague and fellow drag racing fan John Jodauga. While still a student, Edmunds worked with Gibbs, who then was the manager for Irwindale Raceway and a Mt. SAC graduate, writing press releases and results stories for the track. Edmunds’ love and knowledge of drag racing landed him a prestigious gig with the influential drag mag Super Stock & Drag Illustrated in 1967, for whom he penned the “California Newsletter,” covering the West Coast scene. 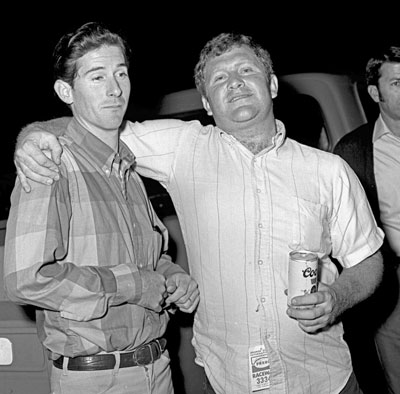 “Jim and I hit it off right away,” Gibbs said. “We had both attended MSAC and shared the passion for drag racing. We worked together at Irwindale until 1968 when I moved to Fremont and Jim pursued the Funny Car craze.”

Edmunds made the major move from Southern California to Chicago to work for Ed Rachanski as a Funny Car booking agent for Rachanski-Brown and Associates that booked major match races in the Midwest and on the East Coast, but Edmunds returned to California to work for NHRA after good pal Gibbs was hired there, initially as the advertising director for National Dragster before Jack Hart tapped him to become part of his competition department. That's Jim , left, with Bill Crites, who both worked for Gibbs at Irwindale and would later join him at NHRA (Steve Reyes photo).

"We always stayed in touch and it was great to see this dedicated guy make a living from an activity that he loved so much,” said Gibbs in a 1998 interview in National Dragster. “When I was fortunate enough to take a job at NHRA, I wasted little time in getting Jim to come along.

“He was always the kind of person you wanted to have around. He loved his job and did whatever it took timewise to do it well. Gifted with a huge amount of common sense, Jim did his best to be fair and accurate in all matters. He was a dedicated guy who loved the sport. He served NHRA well. I've been fortunate to have been involved with many of the major developments within our sport, but one of the very best things I ever accomplished was bringing Jim Edmunds to NHRA.” 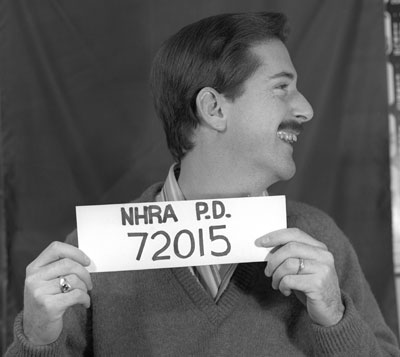 Edmunds joined the National Dragster team and his deep knowledge about journalism and his relentless work ethic eventually made him a valuable Managing Editor for Holland, whose equal talent was spread between the magazine and merry-making that was part and parcel of a much looser NHRA in those days.

"Jim joined our merry group of pranksters in 1969 but was not made of the same silly putty as some of us," said Holland. "Jim was the managing editor during my tenure, and his forte was to get Dragster done and out to [the printer] as fast as possible. He was a solid writer, a good organizer, and kept things moving.” (Although, as the photo here attests, Edmunds was far from a stick in the mud when it came to the fun.)

Jodauga was also part of the staff and the trio split the fun duties of producing the Tricky Tipster racing-handicap feature, with Edmunds, of course, handling the Funny Car portion, lifelong Pro Stock fan Jodauga the factory hot rods, and Holland, a former Top Fuel owner, handling the fuel diggers. 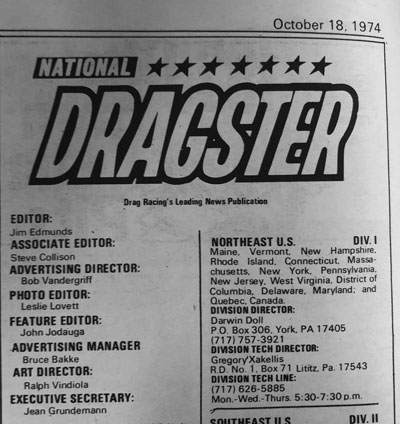 Holland left the magazine in July of 1974 after a disagreement with management, and although Edmunds was not promoted to editor until the Oct. 18 issue (some 14 issues later), there’s no doubt he made sure the issues got out. Jodauga was still his best writer and they were joined by another rising drag racing journalism star, the late Steve Collison, who a few years later as the editor would bring SS&DI back to its prominent position as one of the sport’s best monthlies. As you can see in the masthead at right from Edmunds’ first issue atop the staff, Leslie Lovett, who also had joined NHRA in 1969, was the photo editor and Bob Vandergriff Sr., the father of the current Top Fuel owner, led ad sales for the magazine with new hire Bruce Bakke.

(Edmunds’ ascension corresponded with the change of the name of the weekly editor’s column to “Staging Light,” which in inherited in 1986 and had by byline under for years before we changed it to “Launch Pad” as part of a rebranding a decade or so ago.)

Edmunds’ work ethic was never more evident than after Collison left and Jodauga opened his own commercial art business in 1975.

“Jim bent over backward to help me by allowing me to remain with National Dragster as a part-time writer,” Jodauga recalled. “During those days, we did both the pro and Sportsman coverage of NHRA national events in just one issue, which usually kept us working past midnight. There was a six-month period when Jim and I were the only writers. Whenever I had to leave early to finish an ad or a painting, Jim always took it upon himself to do any of the work that I hadn’t finished without any hard feelings. He was just that kind of guy." 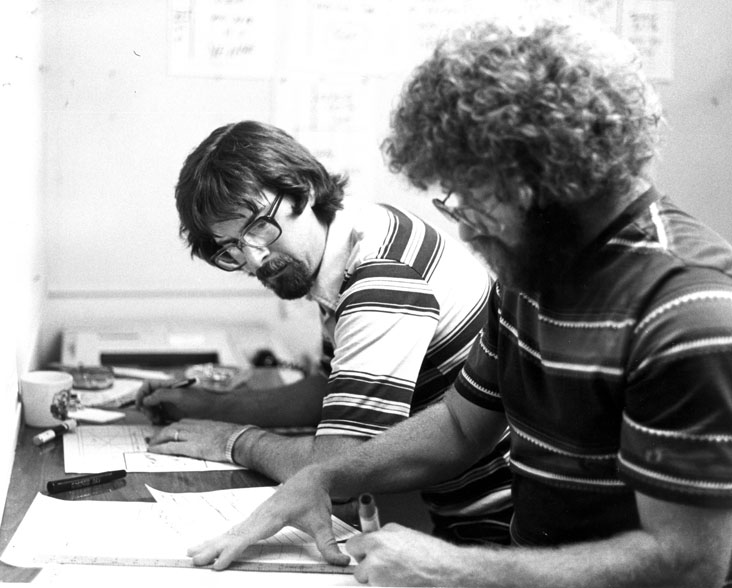 Not only was Edmunds a great leader and writer, but he also supplemented the photo coverage of either Lovett or Crites (or both) at national events and was certainly proficient behind the lens, too. Crites, another of NHRA’s “merry pranksters,” was also a talented artist and became art director. That’s him above, closest to the camera working with Edmunds on layouts. 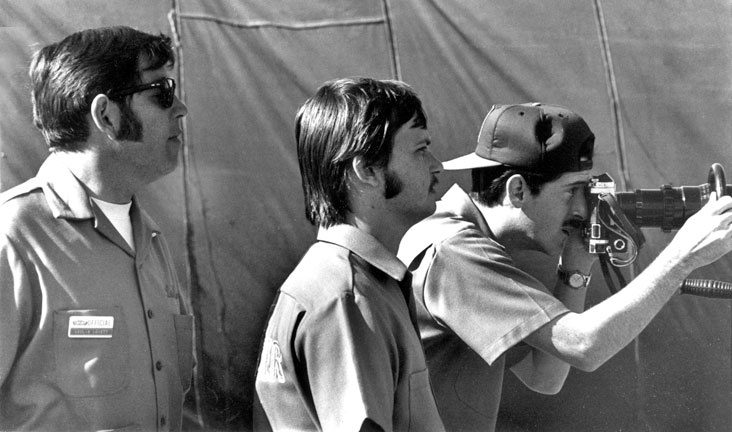 (Above) Edmunds behind the lens, with Jodauga, center, and Lovett looking on. (Hairstyles and sideburns courtesy of the 1970s) 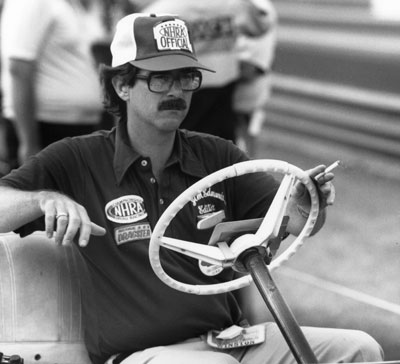 Edmunds led National Dragster through the end of 1981 and then was transferred to the NHRA Publicity Department, where he worked until his retirement in August 1998, cranking out press releases as the NHRA schedule expanded and business boomed to new heights.

I can’t say for certain what led to Edmunds’ reassignment, but as I understand it, Parks was not happy with the way that the National Dragster staff was lauding attention on the drivers of the sport instead of focusing on the machinery, the same “cars are the stars” battle that I would have with him a few years later (but survive … whew). Edmunds had borne the brunt of a lot of Parks’ anger in recent years, and the staff shared with me painful weekly sessions where Parks would haul them into the conference room after each issue and go through it page by page, pointing out the (many) things that displeased him.

As his own son, Richard, admits in the fascinating history of NHRA he is creating by sorting through his dad’s voluminous notes and memos, “Parks was hardest on the Public Relations and National Dragster staff; he was an editor and took his profession seriously, but there were times when he simply could be unbearable. My father often went overboard, cooled off, and then came back and apologized; not before crushing the life out of someone who looked up to him.”

Parks was apparently so upset over the direction of ND, that he personally took back over the reins for a few months in 1982 (he was, in fact, still running the show when I got there in May) before tossing the ball to Phillips, who also took a lot of grief from Parks. 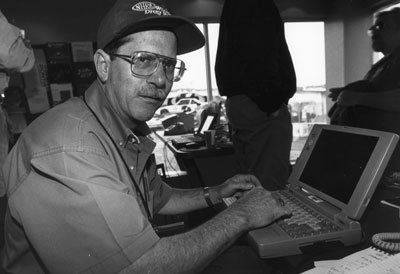 Over the interceding years, Parks mellowed considerably but not totally, and any grudges he might have held against Edmunds were well forgotten by the time Jim retired in 1998, and Parks wrote, “Jim is one of the most dedicated members to have joined the NHRA team. From his early days as a writer on the National Dragster staff to his tenure as one of the finest editors, and through his continued career as a member of the NHRA publicity staff, Jim was a contributor whose goal was always focused on the elevation of drag racing’s best interests. We all owe him more than can ever be realized.” 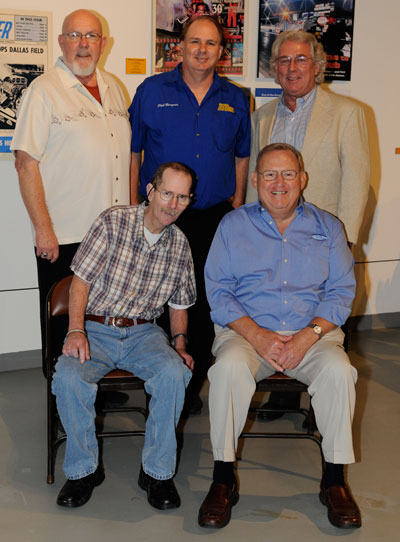 Even after he retired and his health began seriously fading, you could still count on seeing Edmunds’ at the two Pomona events. He wasn’t roaming the pits as he used to in search of the next great story or tidbit simply because he wasn’t able, but it was good to see him.

In August 2009, as part of the celebration of National Dragster’s 50th anniversary, we were all together: me, Holland, Edmunds, and Phillips, representing the editorial leadership of the magazine's last 40 years –- four guys that together lasted longer than nine guys from the first 10 years. It was really something. Wells also was there, helping us to bookend the history of editors. (Back row from, from left, Phillips, me, and Holland; front, Edmunds and Wells.)

Today I salute my brother in editing, and mourn his passing, and I know I’m not alone.