We’re back for Part 2 of Insider reader Jim Riddiford’s Fan Fotos, a collection of images shot in the early 1980s at places like Orange County Int’l Raceway, Bakersfield Raceway, and Ontario Motor Speedway. If you missed Part 1, you can find it here, or just plunge right into Part 2. 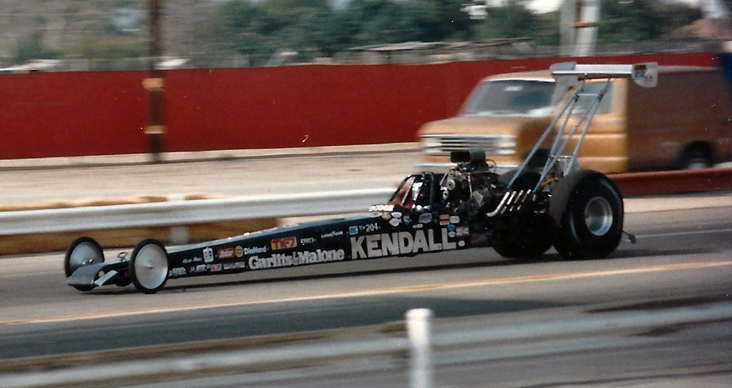 Don Garlits’ 1984 comeback is one of the great stories in Top Fuel history, partnering with Art Malone to return from relative obscurity (if there’s such a thing for “Big Daddy”) to win the U.S. Nationals and the World Finals. This is “Big” thundering down the Pomona quarter-mile en route to the ’84 Finals victory. The reinvigorated Garlits would go on to win 11 more events and two world championships in the 1985 and ’86 seasons. 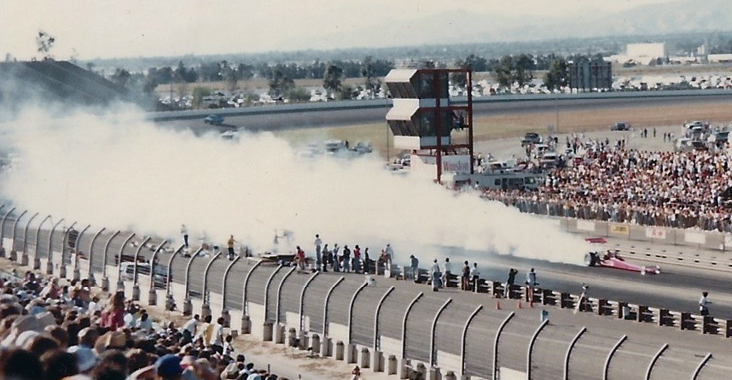 Riddiford shot this at the 1980 World Finals at Ontario Motor Speedway, his first-ever NHRA national event and, sadly, the last to be held at OMS. That’s Shirley Muldowney in the middle of a monster burnout en route to winning her second Top Fuel championship. Muldowney entered the event trailing Gary Beck and the duo seemed destined for a semifinal showdown until Beck went out in round two to unheralded Gary Cornwall, whom Shirley then beat in the semi’s to take the points lead then beat Frank Bradley in the final. The setup at OMS was surely unique, with racing going down the pit road of the huge oval track. Fans on this side of the track were further away from the action but the stands were first-rate. 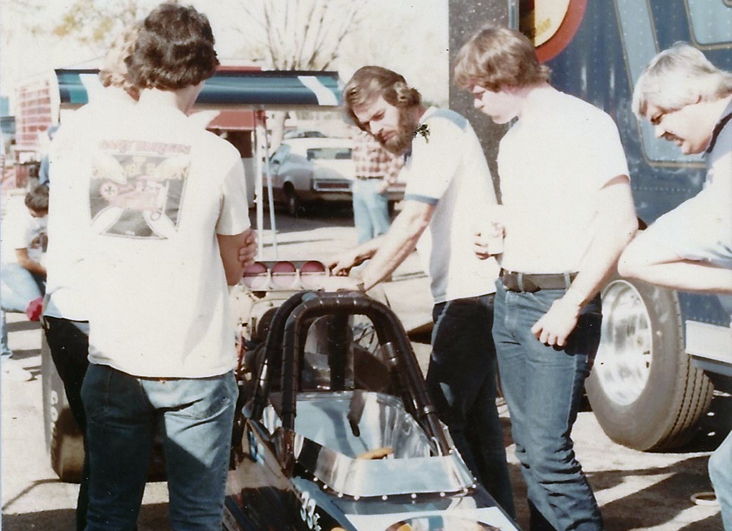 Speaking of Bradley, it’s clear how “the Beard” earned his nickname. The Northern California racer, pictured in the pits with his son, Jim, second from right, and crewman Dave Glass, was a hard runner and four-time national event winner in Top Fuel. He’s also in the trivia books as the first to debut at 300-inch Top Fueler once that rule was implemented. 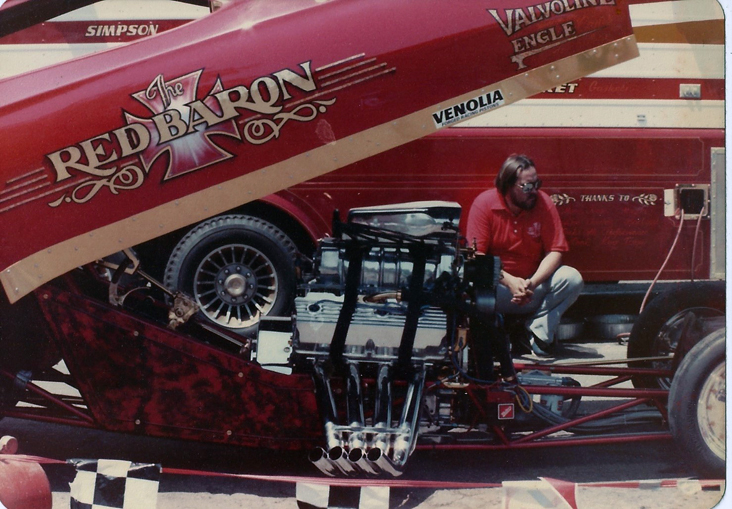 The Clay Miller and Ruben Palawelos-owned Red Baron Dodge Omni was one of the prettiest SoCal Funny Cars of the early 1980s. Driven primarily by Rod Phelps but also Ed White. Promoters should have been all over booking a Blue Max vs. Red Baron match, right? Curses, foiled again, Snoopy. 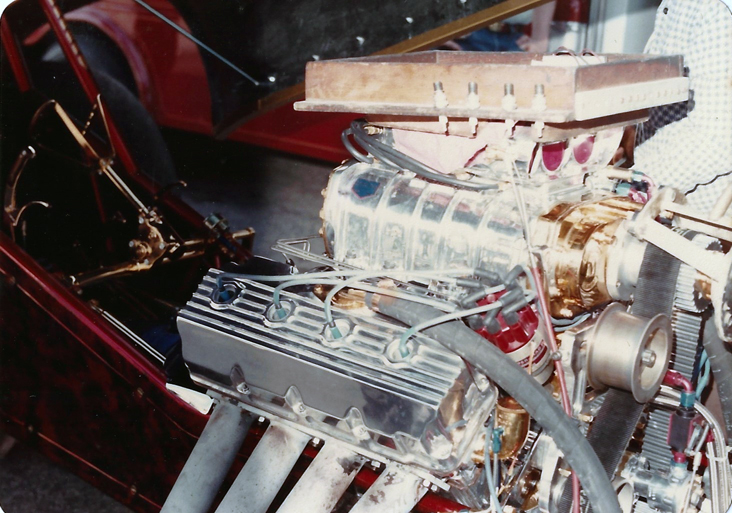 Here’s an engine detail/cockpit shot of the Red Baron, showing plenty of gold anodizing/plating including front blower plate, breather-hose outlet, steering column and butterfly, water spout on the heads, and more. Longtime Insider readers may remember that I wrote a bunch of stories about gold-plated cars back in 2012; hit this link, then scroll down to June to review.

Chuck Beal was one of my all-time favorite Southern California racers, and one of the first to befriend me as a cub reporter way back in 1982. Although he went on to race in nitro, both as a driver and later as a mentor to grandson Brandon Welch, Beal had his greatest success in Alcohol Funny Car, where he was a two-time Winternationals champion. Also worth noting in this photo from Bakersfield is the little extension mounted to the front of the body. A new rule had been implemented allowing for a longer front overhang to accommodate fuel tanks. Not everyone could afford/could order the new bodies to take advantage of this and because some/many cars trip the finish-line photocells with the nose of the car rather than the front wheel/tire, NHRA allowed teams to temporarily add an extension to equalize the playing fields. 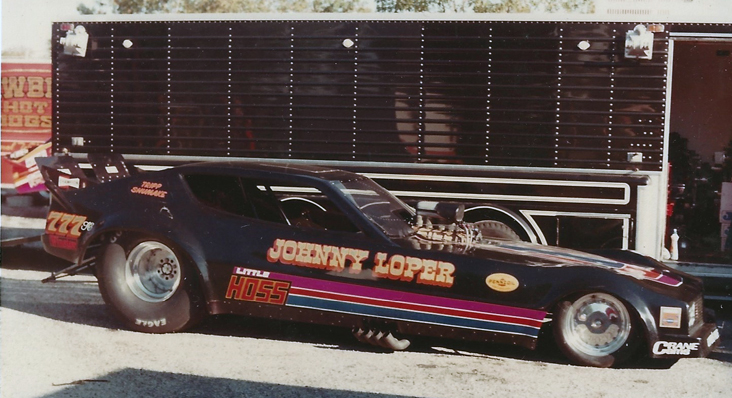 Tripp Shumake was another one of those amazing people you meet in your life. “240 Shorty” was just one of the nicest and friendliest guys you could ever come across and an absolute terror behind the wheel of Johnny Loper’s Little Hoss Funny Cars in the late 1970s. It’s been more than 20 years since we lost him in a highway motorcycle accident, but I’ve remained friends with his wife, Susie, and daughter, Heather, who was just a precious toddler when the NHRA world first met her and went on to write a great book about her dad. 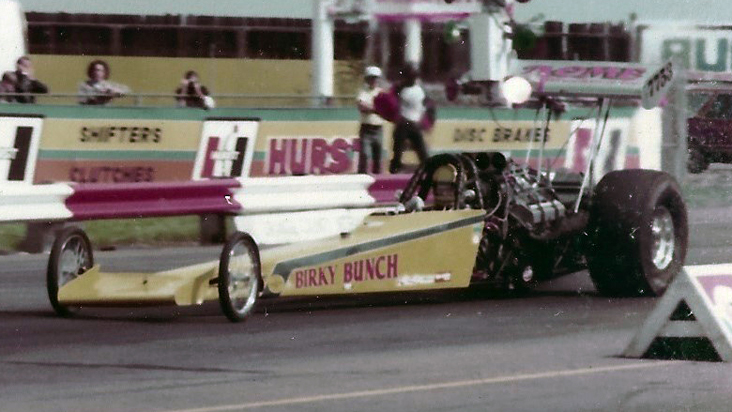 Arnold Birky and the Birky Bunch Top Fuel team never had the funds that the bigger teams had but they could be counted on for appearances up and down the West Coast from the late 1970s through the early 1990s with Bobby Neal at the wheel. The team later went Nostalgia Top Fuel racing with Mark Malde driving the Santa Rosa, Calif.-based machine. Riddiford shot this at Orange County Int’l Raceway after scoring his first starting-line pass from track operator Kenny Green after providing Green with some images. 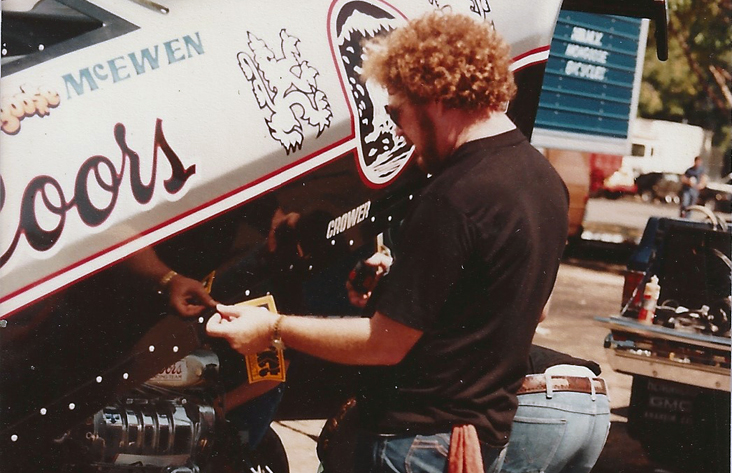 Here’s the fabled “Mongoose,” Tom McEwen, doing some measuring and decal placement on his Coors Corvette at Orange County Int’l Raceway prior to the 1980 Winternationals. Check out that hair and that beard. 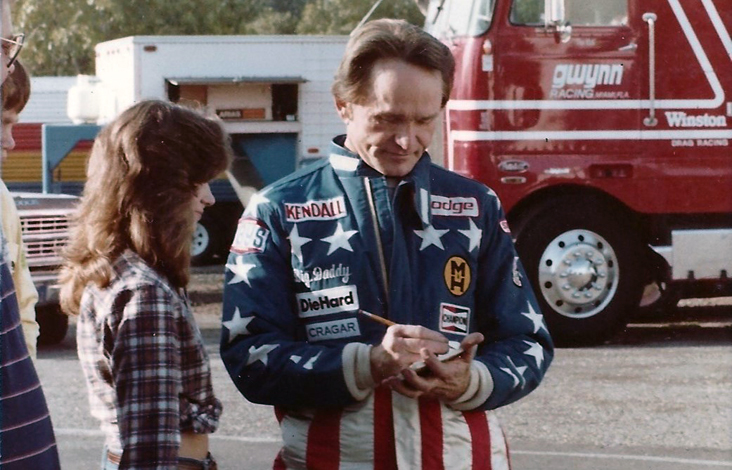 Heart Like a Wheel, the biopic of the life of Shirley Muldowney, was shot at OCIR and Riddiford was there to watch and even ended up in a 13-second clip as a fan in the background of one scene. That's Bill McKinney, who was cast to play “Big Daddy” Don Garlits, signing an autograph in the great old stars and stripes firesuit Garlits used to wear. McKinney might be familiar to fans as one of the sadistic mountain men in the film Deliverance and in many Clint Eastwood films, including The Outlaw Josey Wales. 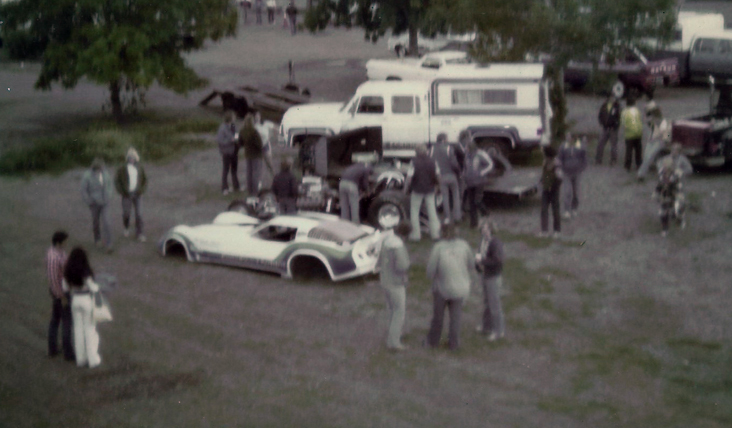 More from Orange County, and this one resonated with me. Not the greatest photo in terms of quality and focus but Riddiford’s notes were spot on. “I took this picture from the finish-line grandstands at OCIR. This Funny Car came in on an open trailer and had a pretty big fire later that evening,” he wrote, and he’s exactly right. 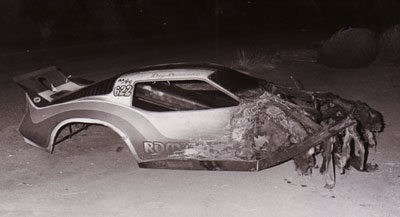 This was at OCIR’s Summer Showdown in 1983 and the driver was Ray Romund, who was always a sentimental favorite to me as one of the “low-buck” Funny Car teams. Reviewing my notes, it looks like Romund got his Romund’s Chariot Corvette up on the headers on a wild burnout and unknowingly tweaked a head gasket. After a strong launch, the car lit up like, well, a Roman candle, at half-track and burned to the ground in the OCIR shutdown area. That’s my photo at right. 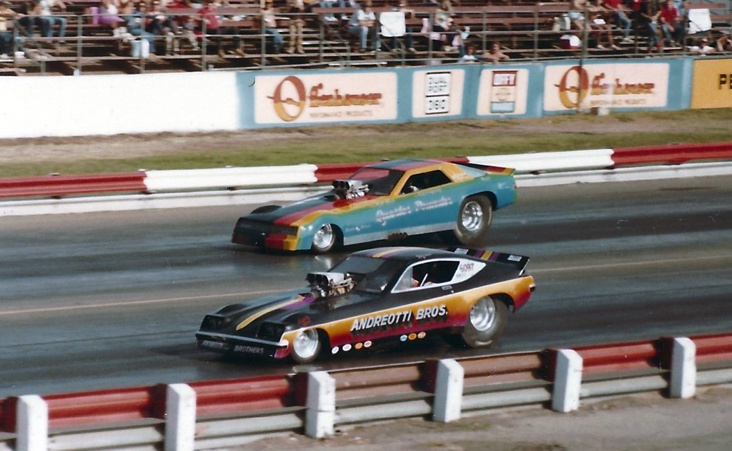 Alcohol Funny Cars at OCIR! That’s Mike Andreotti in the Andreotti Bros. entry in the near lane and Dale Van Gundy in his and partner Keith Clark’s Quarter Pounder in the other. The Van Gundy machine is instantly recognizable by its split-personality paint scheme: rainbow on one side and black on the other.

“Mighty Mike” Van Sant was one of Funny Car’s OGs, competing in the class when it was known as S/XS. This is his last car, the Invader Mustang, easily recognizable for its full side windows. He ran this car from 1982-87 (the body was illegal after 1987 after NHRA outlawed the front fender bubbles that became popular in the early 1970s) and the car resurrected the Invader name that was on his cars as far back as 1968 before he went on to drive for the likes of Roland Leong and Mickey Thompson. 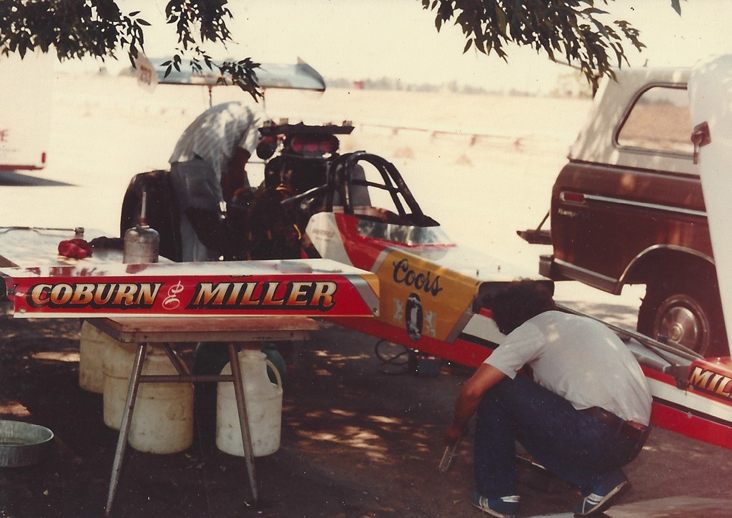 Here’s the last Top Fuel car fielded by the legendary Ridge Route Terrors team of James Warren and Roger Coburn (and Marvin Miller) in the late-1970s through the mid-1980s. Warren had by then relinquished the cockpit to Mark Prudhomme, cousin of the famed “Snake.” Riddiford said they were always easy to find at OCIR, pitted under this tree, which tells you a little bit about how savvy they were and the fact that they were still running the old Mr. Ed-style tagalong trailer that afforded to protection or workspace for the team. 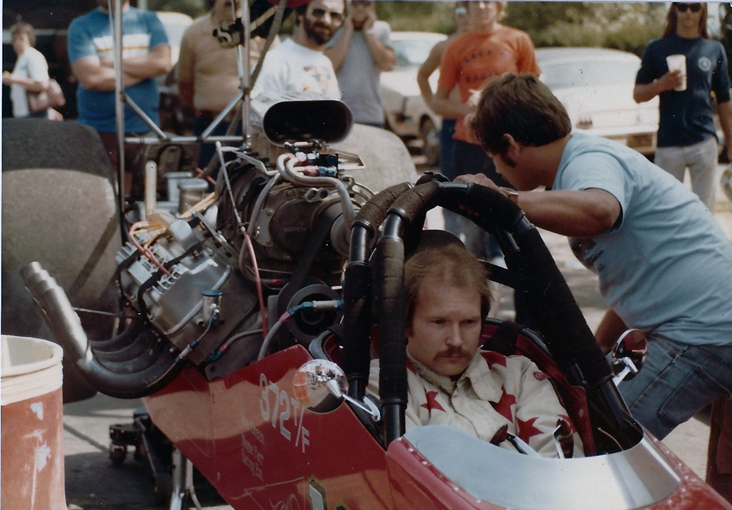 And finally, you saw this photo last week where I pinpointed the car as belonging to Mark Howick but thought the driver might be Kelly Brown because the photo was taken at OCIR, far away from Howick’s Ohio base. Pete Duhart, who fans might remember from his early 1990s Alcohol Funny Car career, wrote to tell that it is Howick behind the wheel. “The only reason I know is that in 1982 or 1983 (I can't remember which year) I met Howick,” he wrote. “He had his rig parked on Beach Blvd. in Anaheim with the Top Fueler outside of the trailer. He also had purchased or was about to purchase a Funny Car from Gary Burgin. At the time, I was trying to get started as a crewmember and I struck up a conversation with him.  He had recently relocated to SoCal from Ohio and wanted to go Funny Car racing, but the only time I saw the Funny Car run was at the Winternationals in 1983 or 1984 (he didn't qualify). Howick only ran the Top Fueler OCIR one time during a summer show there, as I recall.”

Thanks, Pete, for the assist and again thanks to Riddiford for sharing his collection. I’ve received some other fan collections that I’ll share in the coming weeks. I appreciate the interest and, as always, the eyeballs on this column.

Stay safe out there.