Gainesville Raceway, site of next weekend's Amallie Motor Oil NHRA Gatornationals, opened in late 1969 and hosted the first Gatornationals in 1970. Here's a quick look back at the track in its earliest days, through the lens of a longtime NHRA fan.
06 Mar 2020
Phil Burgess, NHRA National Dragster Editor
DRAGSTER Insider

The Amalie Motor Oil NHRA Gatornationals kicks off late next week at famed Gainesville Raceway, so it’s perfect timing that Bruce Peters sent me some photos from his personal collection of the track and the facility.

Inspired by my column of late 1970s Southern California photos last week, Peters sent me a small group of equally blurry but keepsake photos that he snapped as a teenager in Florida in the late 1960s and early 1970s back when the track was known as Gainesville Dragway.

“Most are likely too fuzzy to be of any value to you but thought there may be one or two that you could use,” he wrote hopefully. “Some of them are from the Division 2 points meet held at [then-new] Gainesville [in 1969], held in the fall prior to the first Gatornationals, and some are from the first years of the race."

This interesting photo shows the original timing tower next to the right lane as well as the crossover bridge that spanned the staging lanes, which I think is something that needs to come back. Columbus had one, too, as I remember.

This is a photo of the original Candies & Hughes Barracuda Funny Car, loaded up in the pits. “We had just walked through the gate and they were on the starting line,” Peters recalled. “They lifted the blower on that pass and were done for the day.” Gotta love the ramp truck!

NHRA didn’t require Top Fuel cars to be manually started with a remote starter until 1976, so until then the favored method involved a push start, which at Gainesville Raceway came from the top end down in front of the right-lane grandstands. 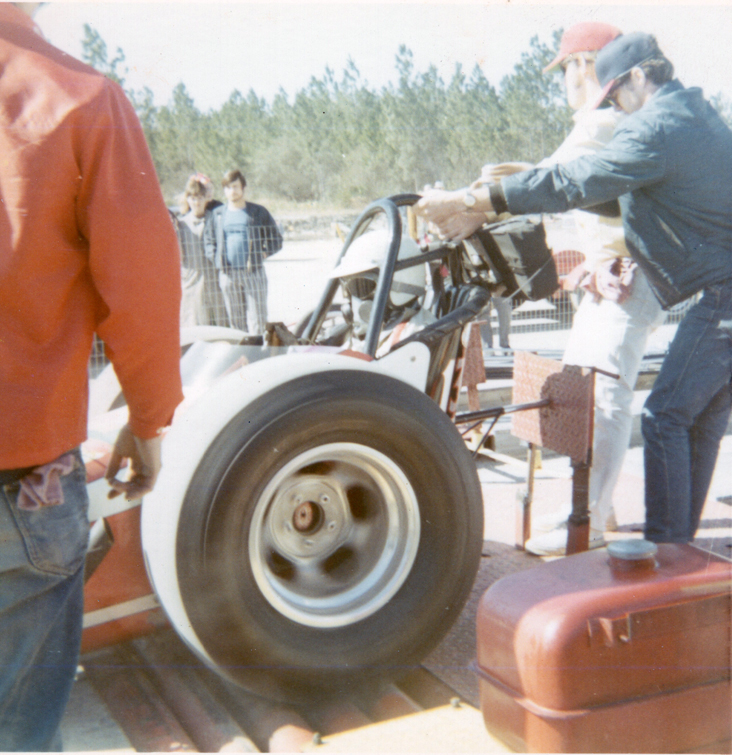 Gainesville Raceway also was equipped with roller starters for the Top Fuel cars. A dragster was placed on the roller tubes, which were spun to high speed, sometimes electrically and sometimes via a street-car-type engine connected to the system. 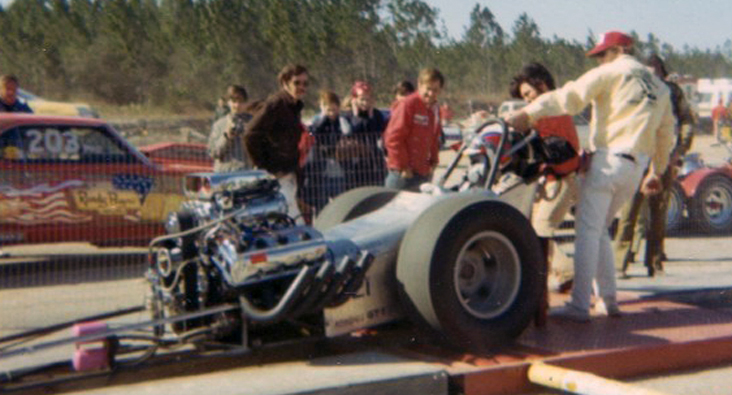 Crewmembers would hold onto the car to keep it from moving, usually by gripping the rollbar. Once the rear tires were up to speed, the driver would drop the clutch and the engine would start. There were a lot of mishaps over the years with cars shooting off the rollers – I mean, look at the fans standing right there -- but for tracks without enough space for a push start, the rollers were invaluable. 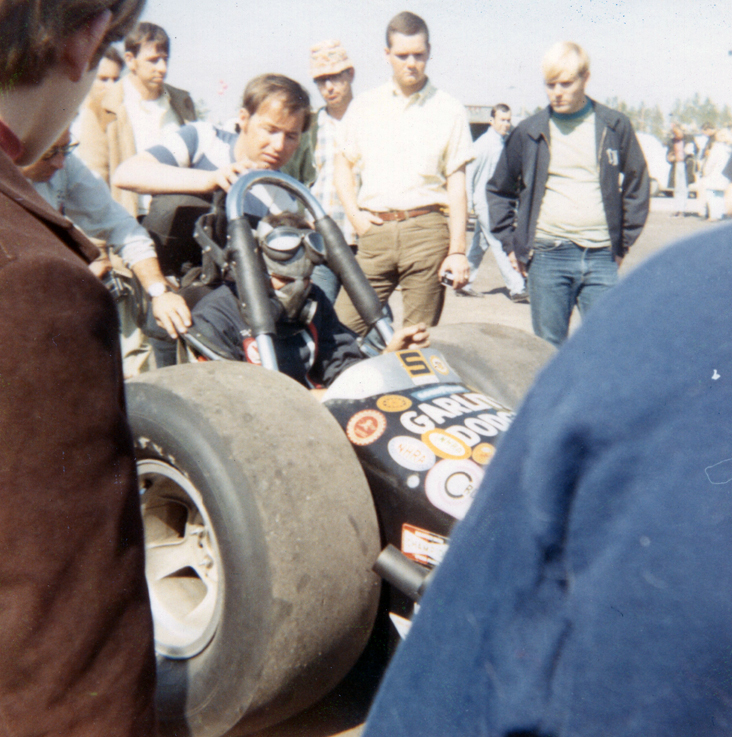 Maybe you’ve heard of this guy, Don Garlits? Although there was no year stamped on this image, this would have to be from either the ’69 Gainesville opener or the 1970 Gatornationals because, as we all know, “Big Daddy” was severely injured on the starting line at Lions Drag Strip March 8. 1970, a few weeks after the Gatornationals (then run in February). The next time he ran in Gainesville in 1971 the engine was behind him.

Garlits lost in the semi’s at the 1970 event when his new Garlitsglide two-speed –- his answer to the new Lenco –- broke. The Lenco was a huge step toward solving fuel racing’s biggest bane of the time, which was heat developing in the two-disc clutches of the direct-drive combinations. With engines spinning upward of 10,000 in the traps, the heat buildup led to clutch destruction, which claimed quite a few lives. Ironically, it was a failure of the Garlitsglide at Lions that cost Garlits half of his right foot.

Were there Funny Cars? Of course there were Funny Cars. Here’s Larry Fullerton and the famed Trojan Horse Mustang. Peters thinks this might have been from Gainesville’s late fall Turkey Trot Nationals event.

Here’s a weird historic moment. That’s Phil Castronovo and the Custom Body Enterprises Charger with a stuck throttle on the burnout in the semifinals of the 1971 event. Castronovo was warming up to race Leroy Goldstein when the throttle hung open. According to reports, Castronovo intentionally steered the car into the guardrail and deployed the parachute to slow his out-of-control mount.

Goldstein and the six-second Ramchargers machine singled into the final round, then got another solo in the final when Bobby Rowe and the Super Duster could not make the call after damaging the engine and transmission in his semifinal victory over Mart Higginbotham.

I hope you enjoyed this trip back in time to Florida nearly 50 years ago as seen from through the eyes (and lens) of one of you. I’ll have other fan-photographed galleries to share in the future. If you click in the Dragster Insider archive link below and do a "find on page" (however your device or browser works) for the term "Fan Fotos" you'll find more than a dozen more from all across the country.