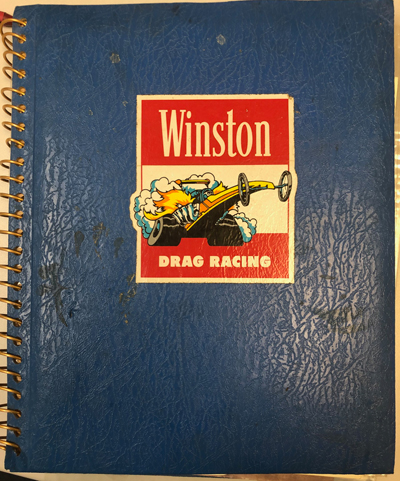 It was pure happenstance that I opened the drawer in the credenza in my office yesterday and out tumbled a four-decade-plus old scrapbook of drag racing photos I had taken in the mid- to late-1970s. They aren’t great by any means –- I believe I was shooting with my stepfather's old Minolta 35mm SLR film camera before I ever owned anything of my own --  but they still gave the warm and fuzzys reconnecting with the fanboy I was (and still am).

The photos and clipped-out articles from the Los Angeles Times that accompanied them inside no longer stick to the tacky pages under the clear plastic sheeting –- they tumbled out onto the floor when I cracked it open -- but the memories still stick to my brain. And how about that vintage Winston Drag Racing sticker on the cover?

Seeing as how we just finished the Winternationals, here’s a look back at my first Winternationals, the 1976 event. That’s my hero, Don Prudhomme, taking it to “the Ace,” Ed McCulloch, in the final round, 6.26 to 6.36, to kick off one of the greatest seasons in NHRA history, in which he won seven of the eight races. Interesting note that I just uncovered: Model maker Revell paid $1,500 to any of its racers (i.e., those of whom they’d made models) if they reached the semifinals or better. Revell had to pay out the max $6,000 in the debut of the program as Prudhomme, McCulloch, Gene Snow, and Tom Prock were all Revell racers. 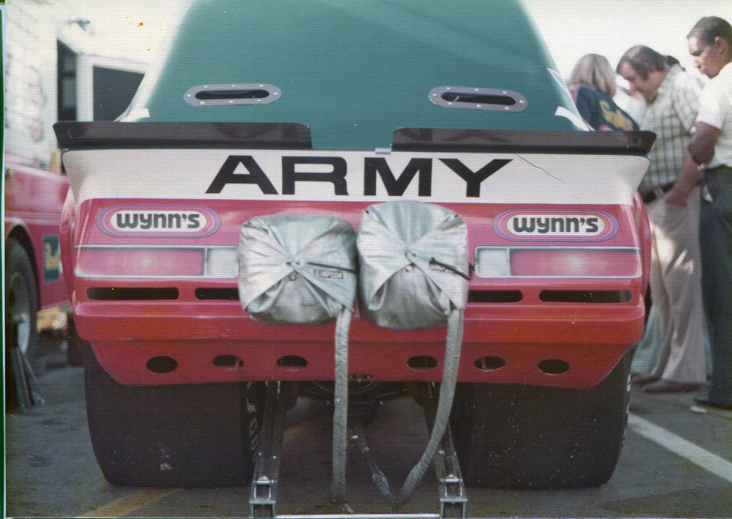 And here’s the view that every racer except U.S. Nationals winner Gary Burgin saw of the Army Monza in 1976. 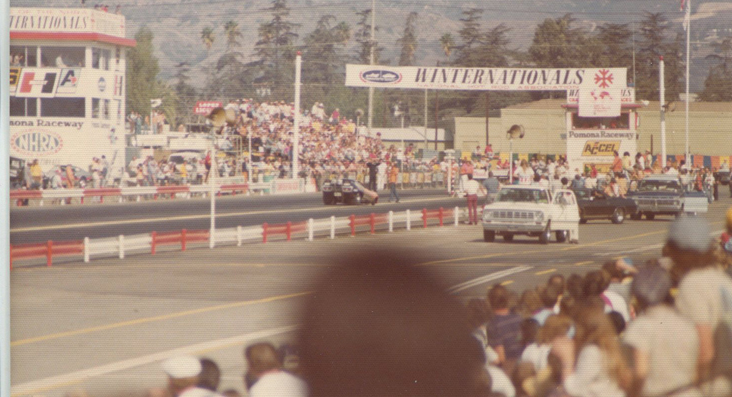 Also from the 1976 Pomona event, this is when I fell in love with Dale Armstrong. In round one of Pro Comp against eventual runner-up Jerry Darien, Armstrong couldn’t get the car out of reverse after the burnout. He cranked the steering wheel hard left and blipped the throttle several times to get the car pointed back to the starting line, then calmly drove it back to the line. He wasn’t allowed to run the round, but the fans loved it! More to love here: The Winternationals banner and the old tower! 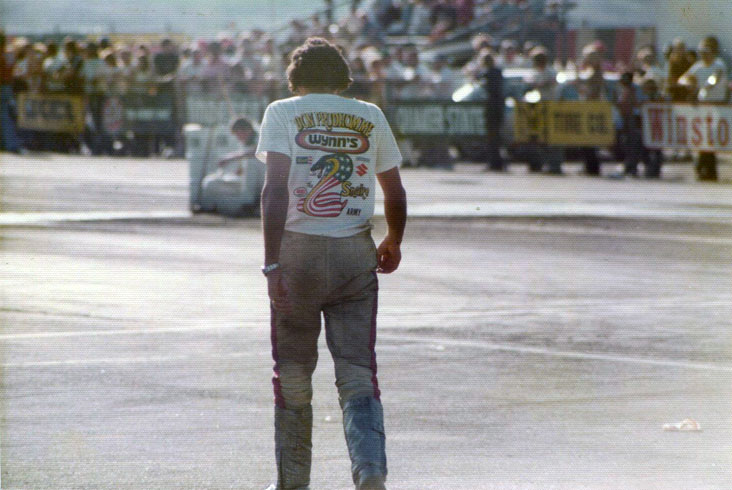 Man, I have always loved this photo I took of Prudhomme walking out to the Pomona starting line to check out the conditions prior to one of the rounds. I snuck to the head of the staging lane to grab it. I can just picture the lope in his walk, the cigarette dangling in his right hand, the dirty firepants, the t-shirt. Classic stuff. 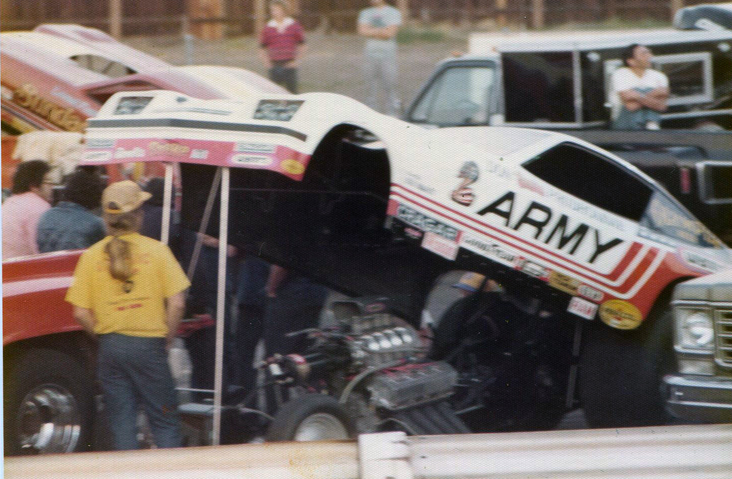 Prudhomme planned to retire the Monza at the end of 1976 at the Manufacturers Meet at Orange County Int’l Raceway (which he won, naturally). Part of the thrill of those great 1970s mega match races was the car line-up and fire-up on the track. Lousy photo, I know, but for posterity. 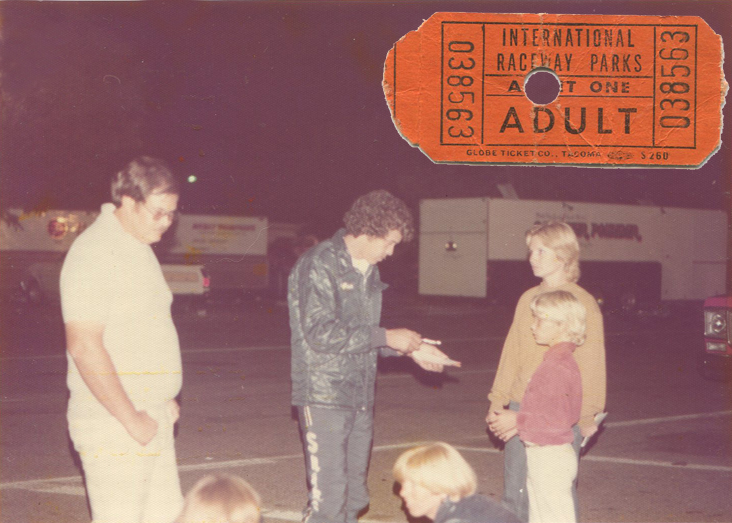 Long after he’d won the race (and there’s my nothing-fancy ticket stub), Prudhomme was signing autographs in the pits when I stumbled across him. Those kids are in the 50s now. Are you one of them? 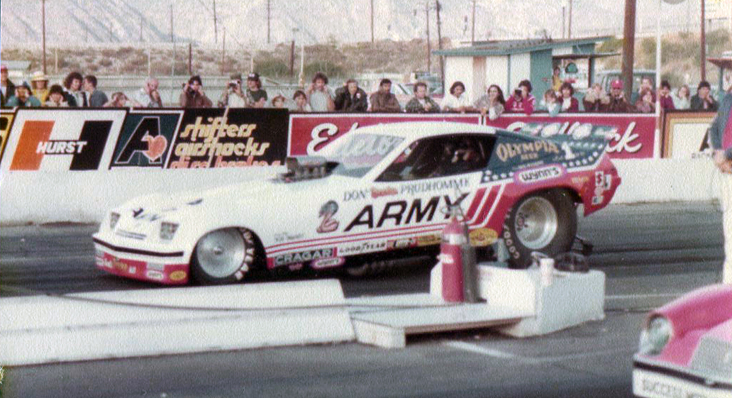 Anyway, remember how I said that Prudhomme planned to retire the car at OCIR (how could you forget? It was only 100 words ago). Anyway, he un-retired the car for the 1977 New Year’s Day Nitro Bowl event at Irwindale Raceway. Apparently his new Plymouth Arrow was not quite ready (but would win the Winternationals in a few weeks). He didn’t win the race (see below) but it was great to see the Monza one more time. What was even more cool was that I had starting line access (hence the better photo) because me and my buddy C. Van Tune were able to create some realistic photographer credentials (don’t try this today, kids; security is much tighter). When I snapped this photo of Prudhomme, he was getting ready to race Billy Meyer in round two (you can just see the nose of Meyer’s car as I was zoomed in on “the Snake”). 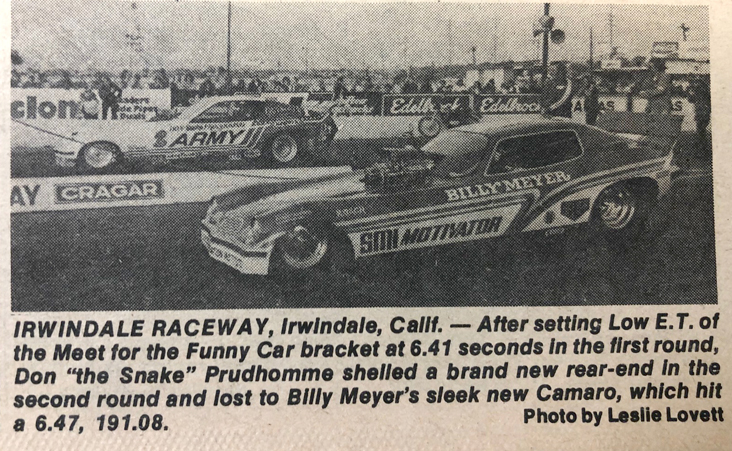 What really made that trip to the line even more amazing was when I opened National Dragster the following week and saw the above photo of that same race with photo credit to the late great Leslie Lovett, who must have been standing right next to me. Little did I know that five years later I’d be working with him on the ND staff and learning everything I know about race car photography from him for the next 14 years until his passing. 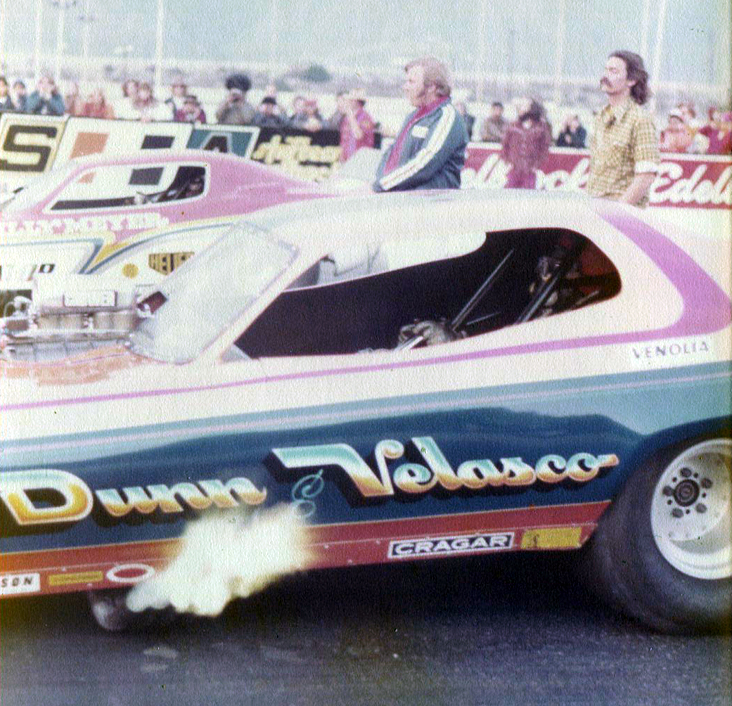 One of my all-time faves,"Big Jim" Dunn, was not only at that Irwindale event, but won it, defeating Meyer in the final. Dig those nitro flames from the headers! The starter is Richard Schwartz, who was Larry Sutton's longtime assistant at Irwindale and Orange County Int'l Raceway.  I did a little write-up on "OFR" in a column a dozen years ago that you read here.

Mike Halloran was the working man's Funny Car driver back in those days and another favorite of mine. Remember when crew members used to dump water (or bleach) in front of the rear tires before a burnout? (Again, the photos aren't great but at least they're out of focus). 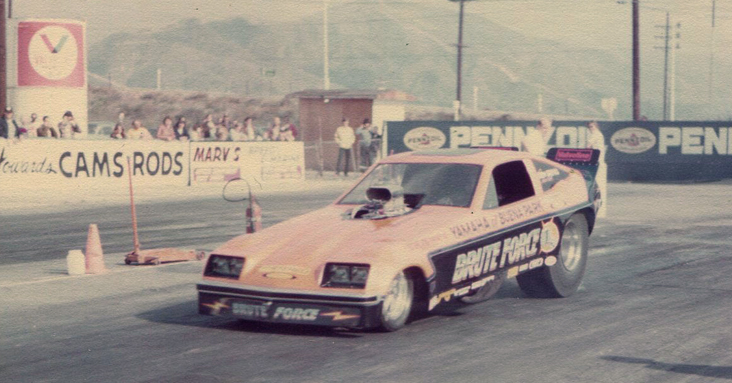 Also making an appearance at the 1977 Nitro Bowl was this guy, who I didn't know (nor did hardly anyone else). Some guy named John Force in the Brute Force Monza. Force was getting ready to make his NHRA national event debut at the Winternationals.

I really like this photo from OCIR for a couple of reasons. First, it has Pat Foster in it. Every photo of Pat Foster is a great photo. Second, it’s him in the Chicago Patrol Mustang II, which had those revolving blue “bubblegum” police lights on the top, which I thought was incredibly cool. Third, not sure how I got brave enough back then to step out between the fence and guardrail to take the shot. And fourth, for all of the praise that OCIR rightfully gets, it had its warts, too: Beat-up guardrail, lack of landscaping, etc. But it was my home away from home. 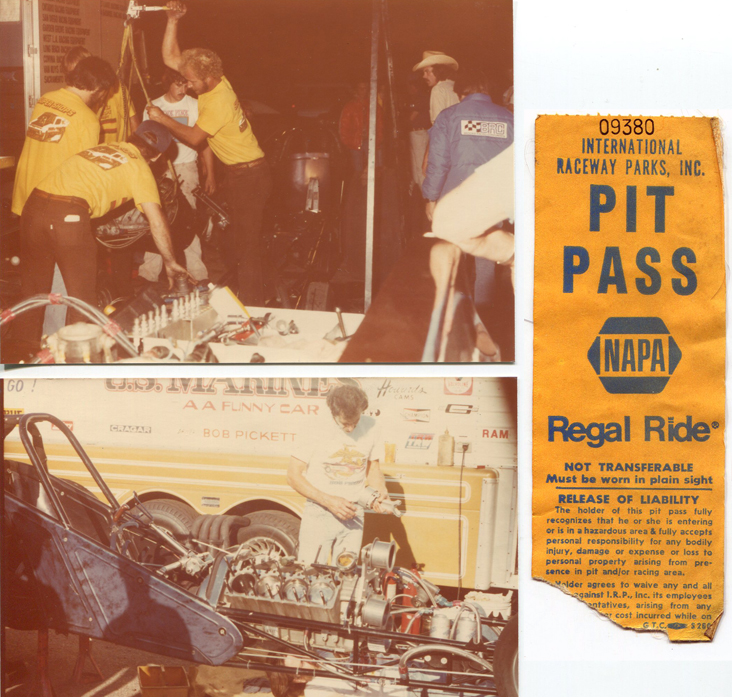 And finally, here’s some things you won’t see today. The veteranos out there know this but newcomers might not. Long before NHRA’s “Every Ticket is a Pit Pass” program, you actually had to buy a separate pass at the track if you wanted to go into the pits. You could low-dollar it by not forking over the extra $5, but who would do that? Plus you got to wear it on your jacket the next day at school! And, of course, it gave you ringside seats to the action, unlike today where you’re looking at the car from the back as its wedged between to trailers. Back in the (cue old-timer voice) good old days, you could stand right next to the crews and see up close and personal what was going on. That’s the Super Shops Funny Car team changing engines and Bob Pickett putting in new pistons. Both from the 1978 Manufacturers Meet at OCIR. Cool stuff!!

Anyway, thought you’d enjoy seeing some more great old pics, even if some of them are out of focus and poorly-lit. I’m sure that a lot of you have the same kind of imperfect keepsakes! If you do, send them to be at the address below. I'd be thrilled to share them.