Bo Butner, the 2017 NHRA Mello Yello Pro Stock champion, recently got a chance to jump into a five-second Pro Mod car and he liked it so much he’s coming back for more.
03 Aug 2020
Kevin McKenna, NHRA National Dragster Senior Editor
Feature

Bo Butner still abides by his long-held belief that driving a Pro Stock car is the most difficult thing he’s ever tackled in racing, but after his Pro Mod debut at the Lucas Oil NHRA Summernationals, he’s willing to add an asterisk to that statement.

“The Pro Mod car is a whole different animal than a Pro Stocker,” said Butner. “I wouldn’t’ say it’s more difficult, but it definitely commands a lot of respect. The power these things have is just unreal. It just keeps pulling and pulling all the way to the finish line. There’s just a lot happening in there. At the eighth-mile, you have your hand on the chutes because the finish line comes up so fast.” 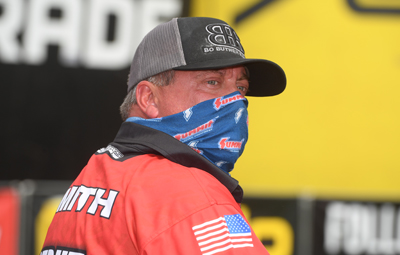 Butner got his chance to race in the Pro Mod class after three-time champion Rickie Smith was sidelined due to back surgery. Butner regularly goes 6.5s in his KB Racing-powered Pro Stock Camaro, and he previously drove a 200-mph Comp Eliminator car. Butner also got a taste of Pro Mod a while back when he made some runs in Harry Hruska’s turbo Pro Mod at a grudge racing event. He readily admits that neither of those experiences adequately prepared him for to drive Smith’s nitrous-equipped Pro Mod.

“Before I even started driving this car, Rickie preached to me about getting it out of the groove and he was spot on.” Butner said. “This [Pro Mod car] just keeps throwing power out there with all the stages of nitrous, you’ve got to pay attention. With the Pro Stock car, I might be able to get a little lazy and let it drift a bit left or right and then ease it back, but in Rickie’s car, I can promise you I do everything I can to keep it in the center of the lane from start to finish.”

During his Indy debut, Butner initially struggled to get down the track. He failed to make a full pass during Friday’s open test session and shut off early on the first of his two Saturday qualifying runs. He later managed a 5.90 that was good for the No. 10 spot in the quick field.

“We struggled to get down the track a little,” Butner said. “This [nitrous] car shifts much sooner than a turbo car or a blower car and we were breaking the tires loose. I’ll tell you, that’s not a comfortable feeling. I learned pretty quickly what you can and can’t do. We finally got the power dialed in and made a couple of decent runs.”

On race day, Butner was able to repeat his qualifying performance with another solid 5.90 pass, but opponent Jason Scruggs ended his debut with a 5.835, the second-quickest run of the round. Despite the loss, Butner was impressed enough that he’s going to once again fill in for Smith at the upcoming Dodge NHRA Indy Nationals, August 7-9. At that event, he’ll also be wheeling his Strutmasters.com Pro Stock car.

“I know Rickie is anxious to get back in the car, but I’m not sure he’s ready so I’m going to drive one car and Jonathan [Gray] is going to drive the other one. I think Rickie has enough confidence in us now that he’ll give us both more power. We have two cars that should be in the top five. Rickie is such a hard-working dude. He reminds me of Bob Glidden and it’s a joy to race with him.”

Racing two cars, Butner chuckles at the mere suggestion of an Indy double-up, but in a year of uncertainty, he admits that anything is possible.

“A double in Pro Stock and Pro Mod? It would be awesome if that would ever happen,” he says. “I can tell you this, if it happened, I’d be worn out. The older I get, the more likely I want to be in bed by 10 p.m., but honestly, I’ve got two really good cars and two really good crews, so I guess anything is possible. After this, Rickie will be back in the car so I don’t know what will happen in the future as far as Pro Mod goes. I just want to have some fun and make the most of it.”