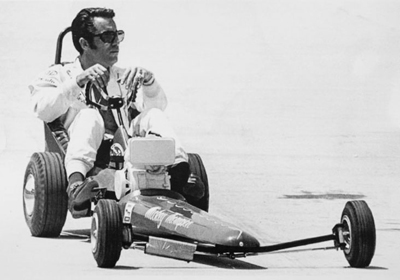 A couple of weeks ago on NHRA.com, I put together a goofy little story about Mario Andretti and his connection with drag racing. The motor-racing legend had been a guest on an iRacing broadcast for an event that included Funny Car hitter Ron Capps, and Andretti started musing about drag racing, talking about how he wished he’d have gotten a chance to drive a Top Fueler like his nephew, John, did briefly in 1993. I pulled out the photo at the right of him driving a “Top Fueler” to “dispute” his claim. (The car was one of the scaled-down go-kart-engine Top Fuelers that Mickey Thompson built for sale to the public.)

Anyway, during the interview, Andretti mentioned that he did actually drag race once in Hartford, Conn., in 1968, and then his memory kinda failed him about the circumstances of who he raced and when. Fortunately for us, my good pal James Ibusuki -- who many of you may remember for the stunning, photo-realistic paintings of drag racing history –- was able to dig out the August 1968 issue of Super Stock & Drag Illustrated and sent me a copy of a story written by Ed Sarkisian, who was National Dragster’s first East Coast editor in 1960 and also shot the photos below.

Circle-track guys going straight was a rarity but not unheard of. Before he became famous for turning corners, A.J. Foyt set top speed at the 1955 NHRA Drag Safari event in San Antonio, Texas, in Ray Harrelson's wingtank Mercury-powered entry to 121.73 mph and, of course, stock-car heroes Richard Petty and David Pearson both competed at the 1965 Springnationals in Bristol, Tenn., after NASCAR banned the Hemi engine that year. But this was the first dragstrip endeavors I’d heard of for Andretti –- the guy whose name was on the lips of ticket-writing police officers and keys-rescinding parents everywhere in the 1970s, admonishing teen speed demons like me with, “Who do you think you are, Mario Andretti?”

Anyway, so “Super Mario” did drag race in Connecticut in 1968, but it was in East Haddam, about a half-hour south of Hartford, at Connecticut Dragway at a week before the Indy 500 (not a day, as Mario remembers it). 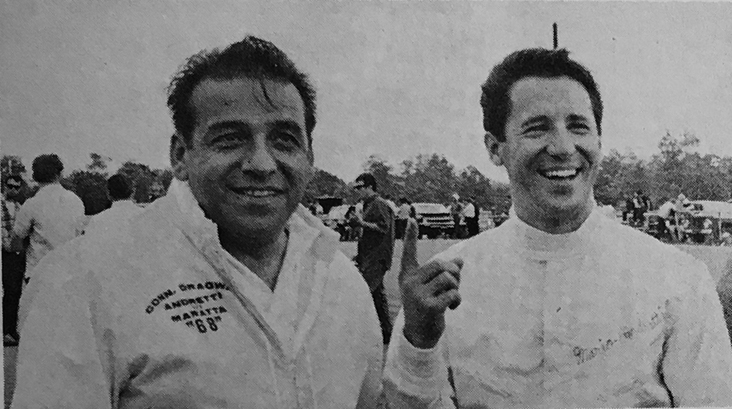 Andretti, who was wheeling a Ford-powered at Indy that year, was there at the invitation of Tasca Ford to race track owner Frank Maratta in a Ford vs. Chevy grudge match. Andretti flew in by private plane -- landing on the dragstrip --  and, after a brief press conference, took to the track in a Tasca-prepared Mustang. Maratta, meanwhile, saddled up in a Camaro prepped by Mel Perry from the rival Norwood Chevrolet dealership in Warwick, R.I., just across the Providence River from the Tasca base in Bristol, R.I. As you can see in the photo above, Maratta also had himself a custom "Andretti vs. Maratta" jacket.

Before Andretti arrived, local hero Bill Flynn, of Yankee Peddler fame, had powered the Mustang into the mid 11s. After a checkout pass to familiarize himself with the Christmas Tree and the car's clutch and shifter, Andretti promptly beat Marrata four straight times with performances identical to what Flynn had pulled from the pony car and even left on his more experienced foe.

After a post-race press conference Andretti hopped back into his plane to return to Indy, where he was not so fortunate. After qualifying his Ford-powered Hawk III in the No. 4 spot, he dropped out of the race on Lap 2 with a burned piston (thus finishing No. 33 out of 33 cars), then took over the wheel of teammate Larry Dickson's car but only made it 24 laps before burning another piston and earning them a joint 28th-place finish. He would go on to score his first (and only) Indy 500 win the next year.

And to everyone else, thanks for playing along. Stay safe out there.