Reprinted from the pages of NHRA National DRAGSTER 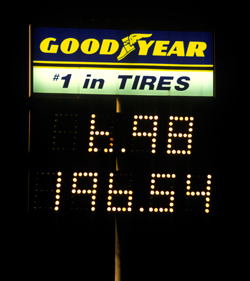 Kurt Johnson, the 30-year-old 1993 NHRA Winston Rookie of the Year, removed any speculation of a sophomore jinx when he made drag racing history May 20 by recording Pro Stock's first six-second run, a 6.988, at the Mopar Parts Nationals. Johnson, son of two-time defending Winston Pro Stock Champion Warren, made his barrier-breaking pass with his Oldsmobile Cutlass during Friday evening's qualifying session to earn $25,000 as the first member of the Holley 6-Second Pro Stock Club.

Friday's overcast weather provided the optimum racing conditions that had eluded the Pro Stock contingent at the first seven events of the year. "Everybody expected that the first six would have come earlier this year," said Warren Johnson, "but the proper combination never materialized. We had the air at Houston [Slick 50 Nationals], but the track was bumpy. The track was good at Gainesville [Gatornationals], but the weather was unseasonably warm. If we didn't get the six here at Englishtown, there was a distinct possibility that we wouldn't see it this year. We were running out of tracks that have six-second potential."

Optimism was high after the Wayne County Dodges of Scott Geoffrion and Darrell Alderman ran respective times of 7.05 and 7.07 during Friday afternoon's session. Ironically, both of the Johnson Oldsmobiles had poor runs in that round; Kurt shut off and W.J. recorded a tire-shaking 7.41. "We overestimated the conditions and overpowered the track," said Kurt.

In the evening session, Alderman got the first shot because his number was drawn for the initial four cars, and Geoffrion lined up behind him in the third pair. When Alderman clocked a national-record-matching 7.027, hopes were high for Geoffrion, who would run in the preferred left lane. But Geoffrion's Dodge got out of the groove and skated to a 7.07. "Both of our cars reacted too violently by getting the front end up and unloading the tires," said Wayne County co-crew chief Dave Hutchens. "We've opened the doors for the Oldsmobiles now."

Larry Morgan's Olds Cutlass was next with a 7.06, and Warren Johnson missed the mark with a 7.08. "The car went down the track straight," said W.J., "but we had an electrical problem, and the engine was missing pretty bad."

With his father still in the shutdown area at the track's top end, Kurt Johnson took his time staging in the left lane, then he dropped the clutch. Though he had not been considered a strong favorite for a six because of recent subpar performances, Johnson attracted the attention of trackside observers when the car left hard and accelerated smoothly with each gear change. The appearance of the numbers on the scoreboard was accompanied by a massive roar of approval from the crowd, and each of the other contenders knew that he had missed a historic opportunity.

"I saw that the Dodges had handling problems and heard the miss in Dad's car," said Kurt after the run. "I was confident with what we had under the hood and knew that if I got off a good, clean pass, there was a real chance to do it.

"I had run a 7.10 in night qualifying at this track last year, and we pretty much went with that combination again for this run," he added. "Because the shift light is so bright on a nighttime run, I probably shifted too soon on each gear change. The car might have gone 6.97 if I had shifted right."

The 6.988 was accompanied by a speed of 196.54 mph, not surprisingly Kurt's fastest run. "Our chassis and clutch setup was actually on the safe side because we didn't make it down the track on the afternoon run. We were thinking about the six for sure, but our main goal was to get into the program."

Warren, considered by many as the favorite to break the barrier on the basis of his total of 30 7.0-second clockings (compared to Geoffrion's next best total of 12), was philosophical about his missed opportunity. "That's my engine under the hood, and the money all goes to the same bank account," he said. "The main thing is that Kurt kept the Dodges from getting there."

The six-second blast was just the beginning of a dream weekend for Kurt. He won the first-place prize of $50,000 in Saturday's Budweiser Challenge by defeating Mark Osborne in the final.

"My guys, Bill Smith and Pat Barrett, deserve a lot of credit for this since they worked hard to get things turned around last month," said the younger Johnson. "It's definitely been a team effort."

"Kurt hasn't fully paid for the two cars that he wrecked last year," said father Warren, "but he's sure going in the right direction."