NHRA Sportsman-racing superstars David Rampy, who retired from driving ta the end of the 2019 season, will come out of retirement for one final race to try to win his first JEGS Allstars at the Denso Spark Plugs NHRA U.S. Nationals.
26 Aug 2020
Phil Burgess, NHRA National Dragster Editor
News

NHRA Sportsman-racing superstars David Rampy, who retired from driving ta the end of the 2019 season, will come out of retirement for one final race to try to win his first JEGS Allstars at the Denso Spark Plugs NHRA U.S. Nationals.

With 100 career national event wins, including five at the U.S. Nationals, and a combined five world champions spread over three classes, Rampy is a bona fide NHRA Sportsman racing legend.

The one prize that has eluded the talented but humble Alabamian is a JEGS Allstars victory but, after he remained the Division 4 Super Stock points leader despite his end-of-2019 retirement, he decided to give it one more shot. 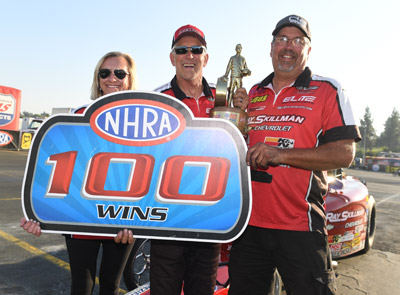 “I’m the kind of person who once I start something, I like to finish it,” he explained. ‘We were leading the points at the end of last season, so I went to [the Division 4 event at No Problem raceway] earlier this year in a borrowed car to try to hang onto the lead. Both David Latino and Jacob Pitt both had the chance to pass me, but we were able to hang on to the spot. Plus, I’ve never won the Allstars and figured this is my last chance to do it.

Rampy, who has been doing some local bracket racing with son Chase this season, will be driving Gary Stinnett’s GT/NA Camaro, a car very similar to the GT/MA Camaro that Rampy has run for years before he sold it late last year.

“I’ve never driven the car and probably won’t before the event, but I feel comfortable jumping into it because it’s almost identical to my old car: same motor, same everything, maybe just a few odds and ends that are different,” he said.

In addition to some bracket racing. Rampy has stayed busy with the purchase of livestock to build a cow farm.

“I’m trying to stay busy. I go to cow auctions twice a week to buy and sell cows, and with 100 acres, there’s a lot of grass to cut, plus it’s time to start bushhogging for the fall,” he said. “Like everything in life, it’s got its good days and bad days, but I enjoy it.”