When Chris “Cowboy” Morel stages his Little City Charger for Saturday’s first qualifying run at the Dodge NHRA Finals presented by Pennzoil, it will mark the end of a two-year odyssey from the Nostalgia Funny Car ranks to the “big show.”
31 Oct 2020
Phil Burgess, NHRA National Dragster Editor
Feature

When Chris “Cowboy” Morel stages his Little City Charger for Saturday’s first qualifying run at the Dodge NHRA Finals presented by Pennzoil, it will mark the end of a two-year odyssey from the Nostalgia Funny Car ranks to the “big show.”

Morel, a former semi-professional bull rider (hence the "Cowboy" nickname), who lives in Reno, Nev. ("The Biggest Little City in the World," hence the name on his car), has competed on the outlaw Nostalgia Funny Car circuit, which allows for bigger superchargers and fuel pumps than seen in the NHRA Hot Rod Heritage Series, for four years but decided it was time to take the next step.

The reason is simple and relatable to any drag racer: “My dad just decided he wanted to go faster,” he explains.

The car is a former Ron Capps/Don Schumacher Racing machine, with chassis updates by Murf McKinney to get it race-ready. Other than the body and chassis, everything else beneath the body is brand-new parts. Veteran Terry Manzer is handling the tuning duties for the new team. 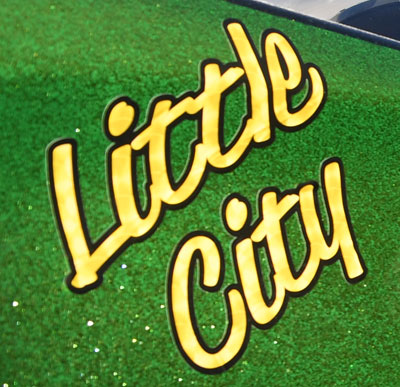 Morel’s eye-catching green Dodge sports a metalflake paint scheme that would have been right at home in the 1970s and is somewhat of a trademark as it also was on Morel’s ’70 ‘Cuda nostalgia car (known as the Little City Cuda, of course). Morel applied the paint himself at his father Mike's auto-body shop. Morel's Auto Body, in Reno.

“There’s probably two pounds worth of flakes on there,” he said, with a smirk. “The flakes are so big that I had to shoot them out of a stucco gun like you use for coating houses and stand back about six feet. It’s a pain in the ass but it looks good now.”

The team initially had hoped to debut the car in 2019 and actually unofficially debuted the car on Monday testing after last year’s fall Las Vegas event. They tested again and Morel completed his license upgrade during pre-season testing at The Strip at Las Vegas Motor Speedway in late January, running a best of 4.28 at 288 mph, and planned to make their debut at the Las Vegas Four-Wide Nationals.

Then COVID happened and the team waited patiently, a new license burning a hole in Morel’s pocket, until the Big Show came back to Las Vegas. 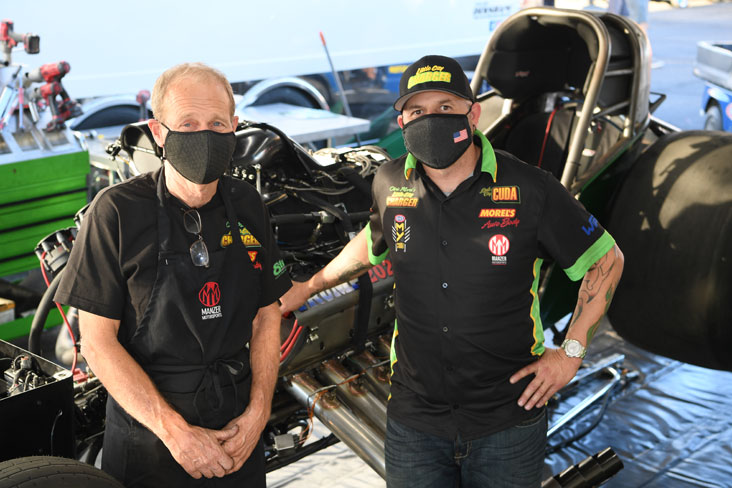 “It’s been really frustrating,” he admitted. “We’ve just tried to keep ourselves busy cleaning and organizing the shop and the trailer. We took the nostalgia car out to Sacramento [Raceway] just to keep fresh but other than that we’ve just been waiting for this weekend.”

Even though he has just four runs in the car, Morel says he feels comfortable and ready to duke it out for a spot in the field, which sports 18 entries looking to make the 16-car field.

If the weekend goes well, the team has plans for a five- to seven-race schedule in 2021 that includes both Pomona events, both Las Vegas events, Sonoma, and maybe Phoenix and Seattle.