It’s a tough job, but somebody’s got to do it. That phrase certainly could have been coined for bottom-end specialists.

Known as “divers” for their propensity to dive underneath the race car, they can effectively drain the oil, unfasten the oil pan, pull and analyze the bearings on the main caps that keep the crankshaft in rotation, knock out eight rods and pistons, and put it all back together in the allotted 75-minute turnaround. And despite their efficiency and mechanical prowess, divers can ill avoid the fates of hot oil burns, busted knuckles, and bruises from miscellaneous shuffling. Nevertheless, they endure the hardships of the job to chase victory on the tour.

The bottom-end procedure sounds simple when properly explained, but it is accompanied by its share of challenges and responsibilities. A diver must be attentive enough to decipher any internal engine problems within a short time span while doing routine maintenance.

After the diver gets his the tools set up, he drains the oil, takes off the oil line, takes off the oil pan, and checks the main bearings. Many divers start by checking the No. 5 main, and if it looks good, will work their way down the line. When the heads come off, the rod bolts are the loosened, the rod and piston are pushed out through the top of the engine. 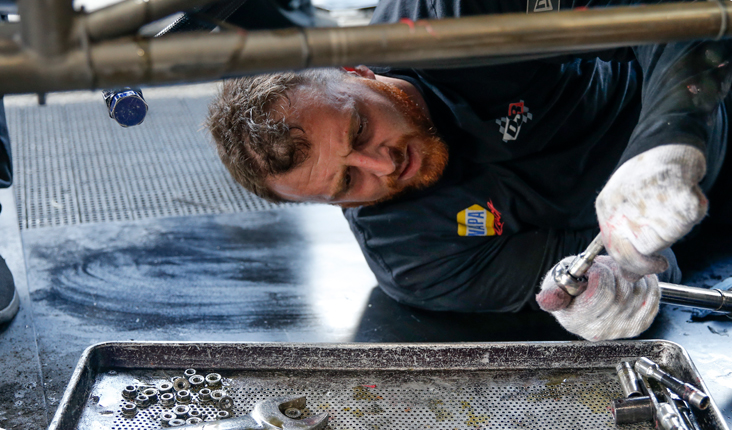 The number five main bearing (a.k.a. the rear main) is checked first because it is the most problematic. The rear main is the closest to the clutch and experiences the most load. The force of a five- or six-disc clutch pulling on an estimated 11.000-horsepower nitromethane-fueled engine is enough to significantly affect the balance of a billet steel crankshaft, especially during tire-smoking runs in which the clutch load shifts dramatically. It is vital that a diver recognizes any blackened or widened bearings that indicate a damaged crankshaft after each run because running an off-balance crank will result in broken connecting rods, a round-loss, and an unemployed diver.

The bottom end is also a position that requires physical toughness because a diver must endure a certain amount of punishment while on duty. They get stepped on, burned, sweated on, kicked, and can have tools dropped on them.

Another challenge that divers face is being able to work in unison with other crewmembers. Divers need to turn the engine when torquing and untorquing the connecting rods, but the cylinder head and clutch specialists also need to turn the engine when adjusting the valves and setting the clutch, respectively. It should come as no surprise, then, that a good diver is one who goes unnoticed during a hectic turnaround. 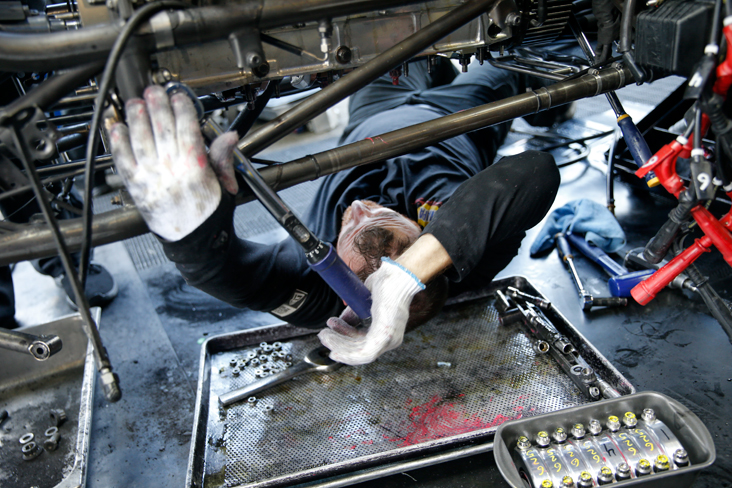 Anyone who has been in the awkward position of working sprawled out, belly up while others are thrashing upright knows that it is not an easy task to stay out of the way of others. It takes time for a crew to jell, making good communication essential. Though the diver position goes unheralded by some, team owners see the importance and look for certain qualities in a diver.

Oftentimes, a void in the diver position causes racers to hire promising candidates who are inexperienced. The most common theme in what teams look for in a diver is consistency because minimizing mistakes translates into round-wins and not ruining nice parts. Having an accomplished diver also plays into a driver’s confidence, knowing that they do the same thing every time and give them a solid engine.

With cuts and bumps and a face smeared with 70-weight oil, divers don’t bask in the glory of their position. Divers, as well as other crewmembers, don’t receive the accolades that drivers and crew chiefs are accustomed to. To a diver, this isn’t important; they are hard-nosed workers with one goal in mind: winning.