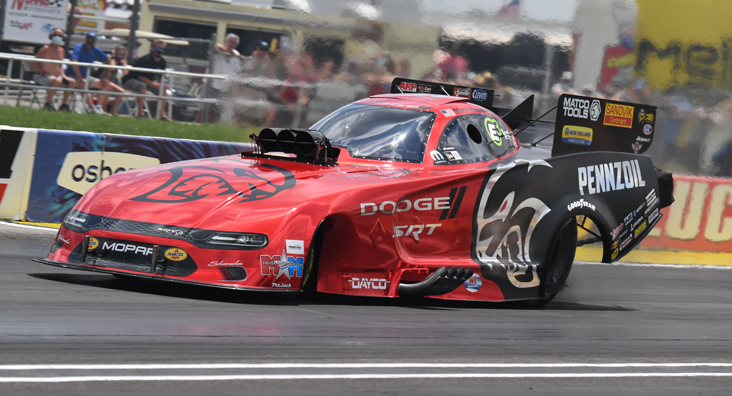 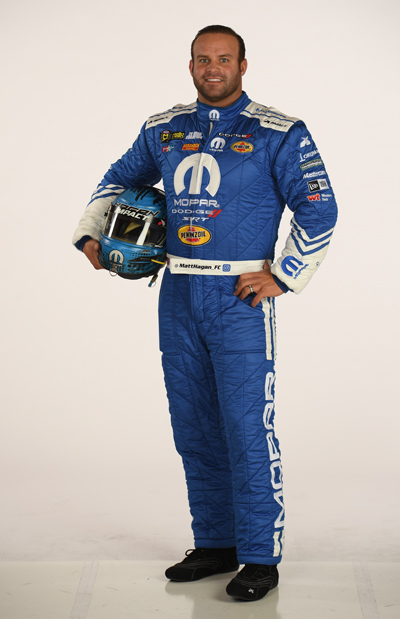 Newly-crowned 2020 Funny Car world champion Hagan went wire-to-wire at the season-ending Doidge NHRA Finals presented by Pennzoil, first clinching the championship in the semifinals and then claiming the event when he defeated teammate Capps in a final round that featured DSR Dodge Charger Hellcat pilots going head-to-head for the seventh time this season.

Hagan also earned DSR’s 14th consecutive Funny Car triumph, a streak that he started in October of 2019 when he won the Dallas event.

“It’s been just an unbelievable season,” said Hagan. “My guys have put an unbelievable car behind me with Pennzoil, Dodge SRT and Mopar. Everybody who supports us. It’s great to win for Camping World and their first championship. My guys have worked so hard all season long. I can’t say enough about them and thank them. Three wins, a championship, it’s just special. I can’t wait for next season.” 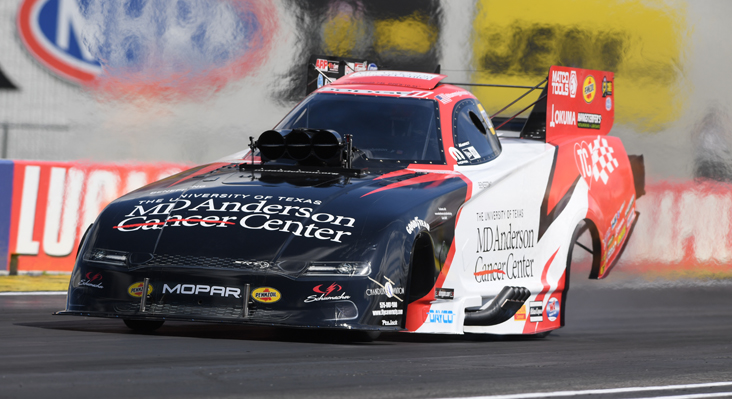 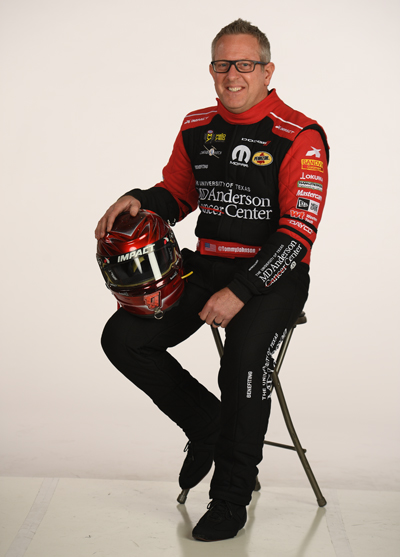 Johnson Jr. started the year with a new cause adorning the side of his Doug Chandler-sponsored Dodge Charger SRT Hellcat “giving car.” Bannering the University of Texas MD Anderson Cancer Center, Johnson wasted no time parking the red-white-and-black machine in the winner’s circle when he drove to victory in Phoenix at the second event of the season.

Johnson then went on to claim the No. 1 qualifying position at the first event back after the four-month COVID-19 pause, racing to a runner-up finish at the first of four Indianapolis events and prominently positioning himself as a viable championship contender. By claiming two more victories in St. Louis and Houston, Johnson made sure he was in the title conversation heading into the final race of the year. Johnson, a 22-time race winner, closes out the year ranked second.

“It was a great season, we came close,” he said. “Matt Hagan and his team did a great job this season. I’m just so proud of my guys on this MD Anderson team. It was a very difficult 2020 year and to come down to the last few rounds of the year and to have a shot at winning the championship is nothing to hang our heads about. It’s disappointing to get so close and not get it, but at the same time it was a great season and I’m proud of our second-place finish. Hopefully, something comes around and we can have a shot again next year. All-and-all a great season. Very happy for the Chandlers and to have their cars finish second and third is pretty outstanding.” 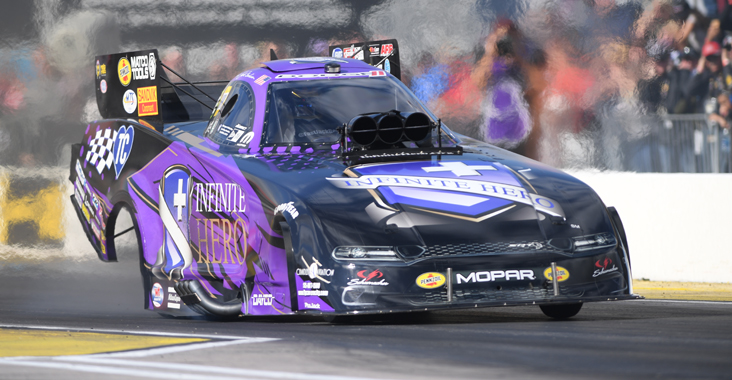 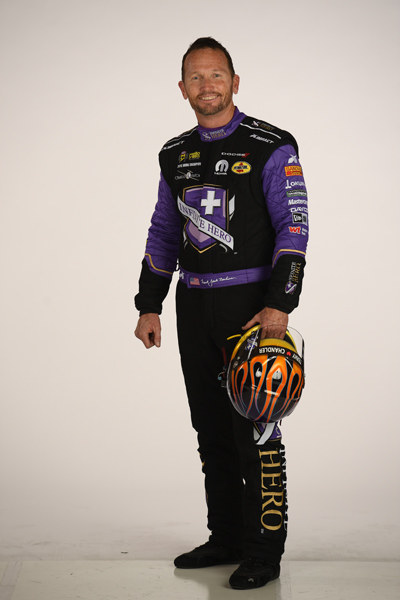 Beckman, runner-up in the 2019 Funny Car championship standings last year in the Infinite Hero Foundation Funny Car team, picked up right where they left off at the start of the 2020 season. Beckman and the Dean Antonelli/John Medlen-guided team started the year with a win at the season-opener in Pomona, Calif., kicking off DSR’s undefeated season. The win propelled Beckman to the top of the Funny Car leaderboard, a ranking he maintained throughout six of the first seven events, positioning himself as a solid contender for the 2020 world title. Beckman visited the final round a total of five times during the year, and picked up his second triumph at the prestigious NHRA U.S. Nationals, before racing to victory at Dallas, earning his first Texas Motorplex trophy.

The 2012 Funny Car world champion, who had the honor of driving one of the Chandler families’ two “giving cars” since 2014, entered the Dodge NHRA Nationals presented by Pennzoil in the No. 3 spot and within striking distance of the lead, but a disappointing first-round loss put an end to Beckman’s 2020 title hopes. Beckman closes out the season with 33 career Funny Car wins, and 28 No. 1 qualifiers.

“We lost the war, but I’m going to have to be comforted by the fact that we won a lot of battles this year,” said Beckman. “We won the Winternationals, we won the U.S. Nationals, we won at Dallas, those are all huge races. We had a fantastic year. We had a car that contended up to the last day. I can’t put a positive spin on losing the championship. I truly thought we were going to do this. I thought it would be the most fitting way as a tribute to the Chandler family going out, and perhaps the end of my career. I’m just going to have to step back and get my perspective and remain an adult about this. As disappointing as it is, it’s been a fantastic year. It’s been a fantastic ride with the Infinite Hero Foundation and the Chandlers and if it’s ended, it’s been a fantastic career.” 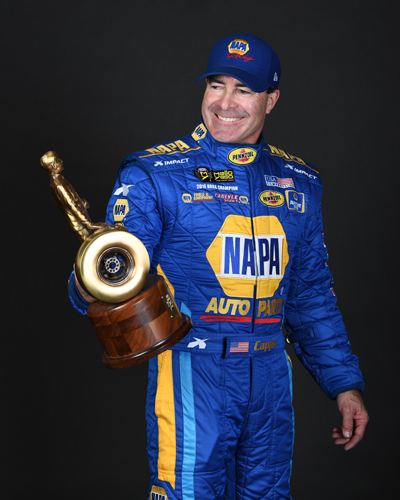 It’s been a tumultuous year for everyone, but Capps will be the first to admit, his 2020 campaign got off to a rocky start even before the global COVID-19 pandemic halted normal life. Capps’ team suffered a trailer fire on the way to pre-season testing and began their year with a string of missteps, including a pair of first-round losses, and a bottom-seeded qualifying effort at the first race back after the four-month season pause. Crew chief Rahn Tobler’s ability to overcome adversity soon became adherently clear. At the Indy 3 event, Capps qualified third and turned on four win lights on race day, earning his first Lucas Oil Raceway at Indianapolis trophy. After that, Capps and the NAPA Auto Parts Funny Car team never looked back. They captured the race win in Gainesville, Fla. just two events later, and went on to race to the semifinals in Dallas before recording a runner-up finish in Houston.

At the season finale in Las Vegas, Capps earned his first pole position of the season and 25th of his career and lined up opposite Hagan in the final round and was hoping to prevent his teammate from doubling-up on hardware on Sunday. Capps was quick on the throttle to take the early lead, but his machine let go with a fireball near half-track, and Hagan was able to drive away with the win.

“What a weekend,” said Capps. “It all came to plan. Especially getting the No. 1 qualifying spot and that Camping World hat. We did get a lucky break first round, but Rahn Tobler and the NAPA/Pennzoil guys did a great job turning it back around. It went almost to plan until the final round. The car was running great and I’m not sure what happened, but another one of those pretty big explosions. Thanks to Impact for great safety gear and everyone at the DSR fab shop for mounting a great Dodge body. Two wins this year, some finals, a pole, not a bad 2020 season for this NAPA team.”