Don’t bother asking Alexis DeJoria if she’s already back up to speed after a two-year hiatus from Funny Car racing. She is.
09 Feb 2020
Phil Burgess, NHRA National Dragster Editor
Feature

Don’t bother asking Alexis DeJoria if she’s already back up to speed after a two-year hiatus from Funny Car racing. She is. The steely fan favorite has more laps under her safety belts already this season than any other driver after three test sessions dating back to late last year and is ready for everything her team can give her.

She’s already made two three-second passes on four qualifying attempts in her comeback race at the Lucas Oil NHRA Winternationals and enters Sunday’s final eliminations ready to do battle.

“Obviously the first run in the car was ‘Oh man, this is loud and fast,’ but I already feel very comfortable in the car,” she said of her ROKit/ABK Beer Toyota. “Del [Worsham] and Nicky [Boninfante] have made this really easy. Almost from the start, it didn’t feel like I’d been gone two years. I was more worried about the warmup, stressing out and hoping that I remembered the procedures than the actual runs.”

That she would always come back to racing -– and to Funny Car –- was never in doubt even when she announced in late 2017 that she was taking a sabbatical to spend time with her teenage daughter.

“It definitely was always my plan to come back; It was just a matter of when, and this seemed like the ideal time,” she said. “My daughter is going off to college soon. She’s doing so well in life, getting good grades in school –- she’s even taking AP classes online -– and she’s going to come out to the race with me some this year before she goes off to college.”

Worsham was always part of her comeback dreams, and when he and Boninfante became available after their driver, Shawn Langdon, returned to Top Fuel in the Kalitta camp. For DeJoria, it was all about unfinished business.

“Del was my mentor from Day 1 and my first crew chief, but we never got to really finish that out because Kalitta wanted him to drive again,” she said. “But I got to race against my teammate and mentor and I had some great crew chiefs with Tommy [DeLago] and Glen [Huszar].

“But I have a very good rapport with Del,” she added. “He’s driven racecars and won championships and tuned them, so for me that’s the ultimate combination. I’m so happy to be back here. I’m just so grateful to have the opportunity to race again.” 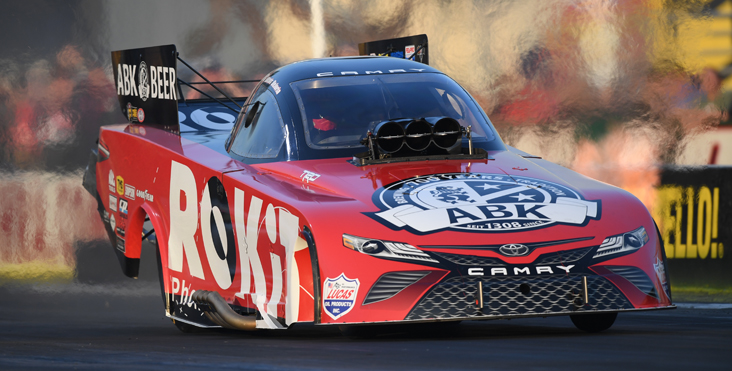 DeJoria began to seriously contemplate a return last spring and started putting the pieces together mentally, and even though she ended up sponsored by ROKit and ABK, both owned by her father, entrepreneur John Paul DeJoria, whose Tequila Patron had sponsored her previously, she already was seeking her own sponsors before he made her a proposal.

“I’m 1,000% supportive of her, and I’m excited to have two of my companies on the sides of her car,” said her proud father. “It just worked out that way. There were others waiting, but I wanted it all. This is our key demographics for ROKit and ABK Beer.”

From the time all the pieces fell into place to the car’s being ready to run was just a matter of four months -- including getting the cars and trailers, and test sessions in Bakersfield, Calif., Tucson, Ariz., and Las Vegas -- and there’s still plenty of work to be done, including a new shop in Charlotte –- far away from the maddening crowd in Brownsburg, Ind. –- and real paint for her forthcoming new Toyota bodies instead of vinyl wraps to ensure that her new car is as pretty as her previous ones.

DeJoria’s return also puts back on the table the hopes for a female world champion in Funny Car, the only class that’s never had one.

“It’s a lot of pressure, but I want to be the one,” she insists. When I left I told Courtney [Force] that the pressure was on her to do it, but know that’s she’s not racing and I am, I’m taking the torch back, and I’m very excited about it.”

Be sure to keep an eye out for an in-depth look at DeJoria’s return to competition in an upcoming issue of NHRA National Dragster magazine.