What the teams said ahead of the Auto Club NHRA Finals:

“Doesn’t take a math whiz to figure out that this race is on deck to be the most meaningful of the season. The potential for greatness is there for the taking, and we are ready to grab it."--Leah Pritchett
15 Nov 2019
Jacob Sundstrom, NHRA National Dragster Associate Editor
Race coverage

The Auto Club NHRA Finals mark the last race of the 2019 season and all four Mello Yello championships will be decided on Sunday. Hear what the teams are saying as we prepare to wrap up one of the most exciting seasons in recent memory.

Steve Torrence
“There are lots of different scenarios, but if we just go out and win the race, everything else will take care of itself. We know from experience what can happen out here, but if we execute our game plan, it’ll be hard to beat us. I know these Capco Boys are gonna give me a good race car and my job is to bring it home.” 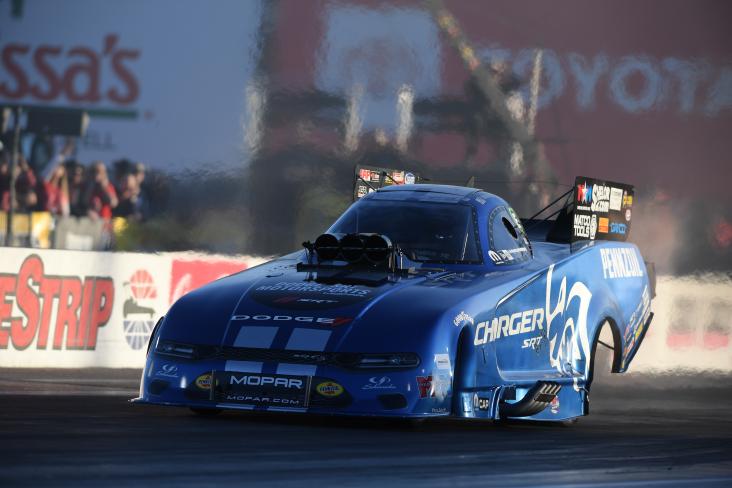 Jack Beckman
“We have to do our best to optimize points starting with Q1. I think we’ve got a car that’s clearly capable of doing that. We’ve been No. 1 qualifier three times in the last six events. I think right now we’re clearly a front-runner to contend for the championship, not just in our points position, but in our performance lately. So, my job is to do my job. If we get another opportunity like we had in Vegas where we are paired up with (Robert) Hight early, we get a chance to control our own destiny. If we win the race and Robert is not in the final next to us, we win the championship. I’m not looking at Matt (Hagan) or John Force behind us because we want to finish first; we’re not trying to defend the second-place position. So, our goal right now is to maximize qualifying points, execute perfectly on race day, and hope that the ladder falls in such a way that we pair up with Robert before the final round.”

Antron Brown
"We definitely want to end the year on a high note. It’s the NHRA Finals, and you’ve got to bring your A+ game. Our Matco Tools Toyota team has been working hard, and we just want to go out there and showcase the work we’ve put into it. The Countdown wasn’t good to us this year. We came into it third, and we’re looking for a strong finish.”

Ron Capps
“Unfortunately, we sort of struggled in Dallas and Vegas, but we tested on Monday in Vegas and feel like we’ve got our NAPA car back. Mathematically, we’re not out of the championship and you never know what can happen in Pomona. We’ve seen stranger things. So, we’re just going to try and win every single point we can. There are more points for each round of qualifying, more points for qualifying position, and more points for each round on race day. Our goal is to win the race and move me as far left on the stage for the banquet Monday night as possible.”

Matt Hagan
“Winning Dallas was definitely the shot in the arm we needed. You’re always hoping for the best, and you have that ‘never give up’ mentality. We struggled at the beginning, but it’s one of those things where the points are so close once they’re reset that it really only takes a race or two to get back in there. If we would’ve done better from the get-go, we might be leading in the points, but ‘woulda, shoulda, coulda.’ We’re happy to be in this position where we have a shot right now. The only thing we can do is control our own destiny; do the best job we can and let the points fall where they may.”

Tommy Johnson Jr.
“I can’t wait to get to Pomona. We’ve had such success there, we’ve been to the final round the past four years and won it two of those times. It’s a good race for our team, and the way our car ran in Vegas, I think that we have a really good shot at finishing the season off well, and we’ll try and get as high as we can in the points.”

Leah Pritchett
“Doesn’t take a math whiz to figure out that this race is on deck to be the most meaningful of the season. The potential for greatness is there for the taking, and we are ready to grab it. All we can do is focus on being as quick and consistent as possible. Capturing a low qualifying time to better position ourselves for race day is key more than ever. We are due for our best Countdown showing, which means better than the semis. All we can do is race smart, win the race, and let the competition cards fall where they may.” 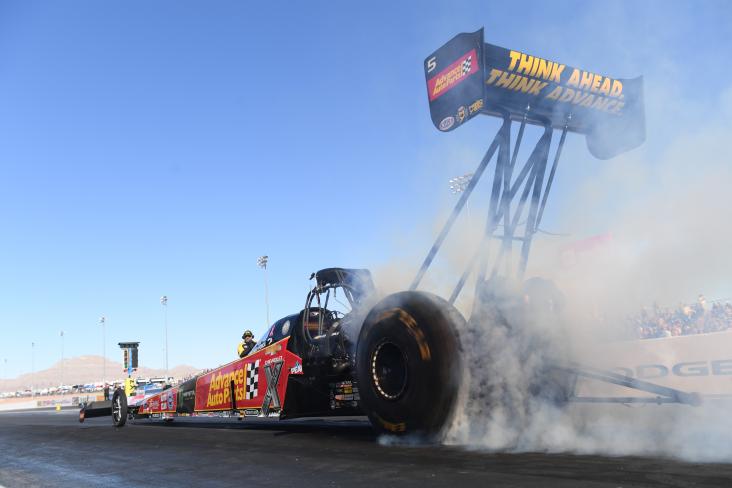 Brittany Force
“I’m very confident going into Pomona this weekend with this Advance Auto Parts team and chasing down the 2019 championship. I’m lucky to have David Grubnic and Mac Savage in my corner and the eight other guys around me who are the most dedicated, hard-working guys I know. We really turned a corner at the right time and we’ve made some big moves this season. The start of the Countdown, at Reading, that seemed to be the turning point for us. We set the National ET record, qualified No. 1 and made a semifinal round appearance. Charlotte, we qualified top 3 and made another semifinal around appearance. Now, there’s only one race left and we are looking to finish this year off with a championship.”

John Force
“Well, we’re heading into the last event of the season. We have points and a half up for grabs at this event, like Indy, and anything can happen but this ‘Old Blue’ PEAK Chevy Camaro has been a great race car all year. It’s a fast hot rod and Brian Corradi, Danny Hood, Tim Fabrisi and all the young guys on my team, they’ve worked really hard to give me the best car out there. I love being in this car. Doing what I get to do and being out there with all the fans and with our sponsors, it makes me feel alive.”

Robert Hight
“This Auto Club Chevy Camaro team has had an incredible season. Jimmy Prock, Chris Cunningham and all of my guys, this championship is what we’re all going for, we missed it by that much last season which makes us want it even more. Vegas wasn’t what we hoped for but we had a great race car and we’re still in the points lead which gives us a lot of confidence. It’s the final race of the season this weekend and with points and a half, anything can happen. I think its really going to come down to race day and this Auto Club team is ready.”

Austin Prock
“I’m just proud of how far this Montana Brand / Rocky Mountain Twist team has come and how we’ve been doing lately. You know, we changed up crew chiefs earlier this year and had to learn and figure out what worked for us, but Mike Green and Ronnie Thompson, they’ve done one hell of a job. We didn’t get the win in Vegas but our teammate Brittany Force did and I’m hoping she can wrap this championship up for John Force Racing when we head to Pomona this weekend. It’s been one heck of a year.” 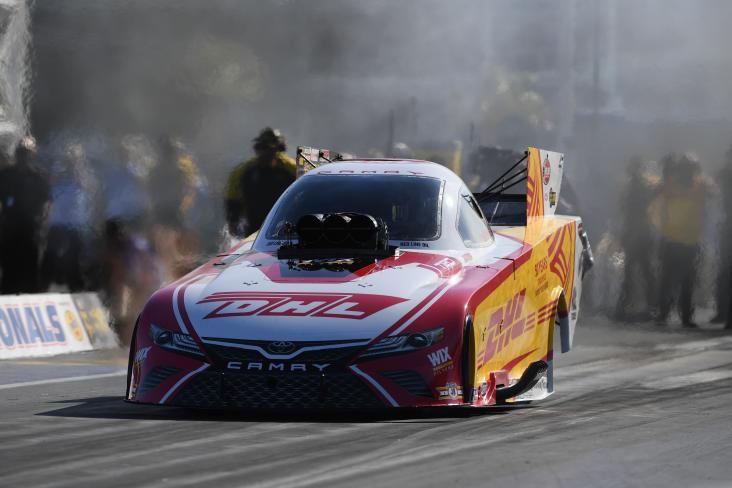 Richie Crampton
“You can’t beat the atmosphere at the Auto Club Raceway. You have snowcapped mountains in the background. The fans are awesome. There is a ton of history in Southern California. Getting a win at the Auto Club Finals is a big deal.”

Doug Kalitta
“I have two tough competitors in front of me in the points. We are just going to take care of our business and hopefully we can catch them early on race day.”

Shawn Langdon
“There are a lot of legends that have both a Top Fuel and Funny Car win at the Auto Club Finals. I would definitely like to add my name to that list. We just need a couple of good runs in qualifying and then I want to see four win lights on Sunday.”

J.R. Todd
“I would love to grab another Wally to close out the season. I remember last year’s race like it was yesterday and getting that last win light of the season is pretty special. We are going to try and be the last Funny Car standing on Sunday for sure.” 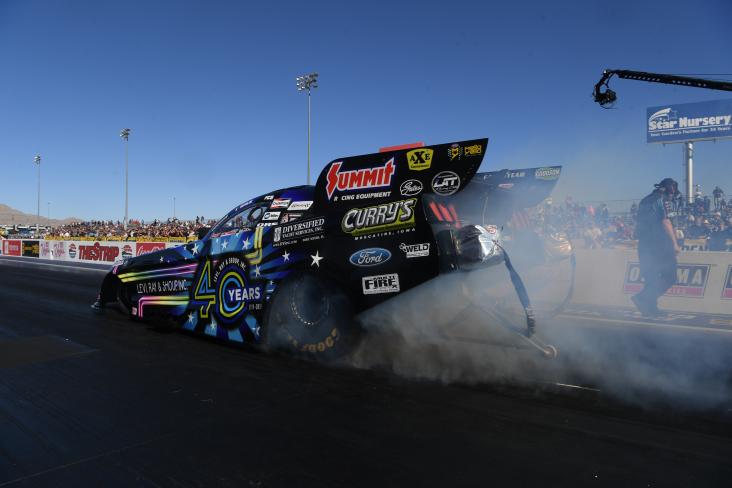 Tim Wilkerson
"We're still trying to win rounds, and we have a chance to get back to being a single-digit in the points. We're in test mode [for next year] now, but that doesn't mean we don't want to gain points and win this last race of the season. The other guys are running good in the middle of the pack, and it'll be an interesting championship run. Maybe we can spoil it a little bit."

Jeg Coughlin Jr.
"It's the NHRA Finals, the 'Last Go' if you will, and even though we have designs on winning this race, we just don't expect Erica and her Melling team to fall off the incredible pace they've shown throughout the playoffs, but you never know. We're going to fight to the end, no question about it, but I want to be realistic as well."

GREG ANDERSON
"I've had a lot of good fortune in past years; people don't realize you just don't win a race or a championship without good fortune. There is just too much competition, too many people that do a great job. So yes, anything can happen in Pomona. We'll go and try as hard as we can. I'm very happy with my Summit Racing Chevrolet Camaro right now. We had a good chance to win in Las Vegas, and we have a great chance to finish the year strong for Ken Black, Summit Racing, and this team."

JASON LINE
"The goal this weekend is pretty straightforward. We want two Summit Racing Chevrolet Camaros in the final round, and we want to win. It's as simple as that. Like every year, a lot of effort went into increasing performance and being better every race, and the drivers have been working hard to be their best, too. We've had highs and lows, but we know we've got a lot of potential. Pomona will be about living up to it."