"This is one of the toughest eras in the sport’s history. If you get a win this year you will most likely have had to race easily three championship-caliber teams." -- Richie Crampton
18 Oct 2019
NHRA National Dragster staff
Race coverage

“This season has been pretty incredible. We’re nearing the end of the Countdown and we extended our points lead in Charlotte and this AAA Texas team, they really pulled together and did a good job. Winning in Charlotte earlier this week is what we needed and anything can happen with points and a half when Pomona rolls around. The Funny Car class is so tight, anybody can win so we just have to stay focused and work hard. Jimmy Prock and Chris Cunningham, the AAA Texas team, this is all they want, winning a championship. We didn’t get it done last year and that’s all they want and it’s what I want too. They don’t even want to go home. They just want to stay on the road, get this rAce car prepared perfectly.”

JOHN FORCE
“Racing is what I love to do. I’m trying to fight the old man (in me) every day. You know, I started hearing, ‘you’re 70, this thing is over,’ and it’s really true what they say, it’s how bad you want it. When I get in that car, I’m alive again. It’s like my heart starts working and everything is good. So, don’t let anybody tell you that you’re too old. Get up and stay alive and keep moving. Someday I’ve got to go out that door, but before I do, I’d like to win at the Motorplex and maybe win another championship.”

“This Advance Auto Parts team is coming off a positive weekend in Charlotte. We picked up four bonus points throughout qualifying, got to the semifinals and moved to third in points. We need to continue our progress and keep the focus. We want to move up closer to that No. 1 spot and its going to be really important for us to continue building on our momentum in these last three races of the Countdown. Dallas is this weekend, so I’m looking forward to seeing what we can do there. This team has waited a long time to get in the winner’s circle again and I’m hoping this weekend is it for us.”

“We had a good car Monday. Put up some great numbers on race day but I came up short on the starting line. It was the first time all season that I got beat on a holeshot but you know, I just need to do a better job next time. This Montana Brand/Rocky Mountain Twist team has been working really hard to turn on those win lights, so if we can keep it up and I can do a little better of a job driving, then we can hopefully end up in the winner’s circle again. I’m looking forward to getting to Dallas. John Force Racing has always had a lot of success there and it tends to be whoever wins Dallas, ends up winning the Championship so hopefully we can go there and turn this program around.” 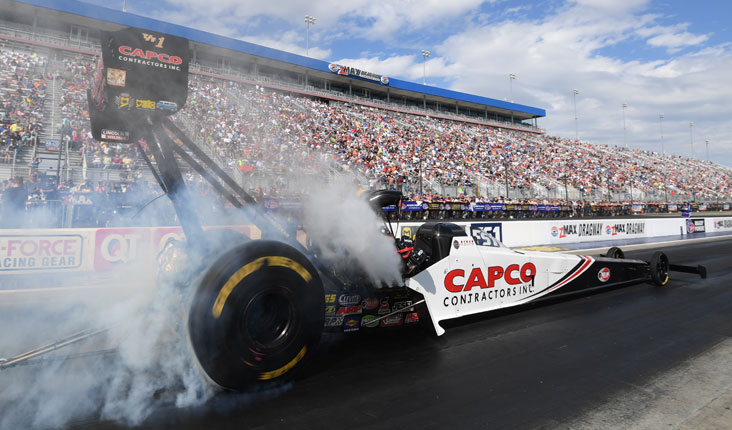 “The goal is simple: win the next round and then the round after that and so on.  Small steps, one after another, eventually leading to the prize, which this week is to get the Capco Boys another cowboy hat. It’s way too early to worry about points,” he said after regaining the point lead, (because) if you even remotely start looking at them, you can allow it to get in your head and you don’t want that for this race or the last two." 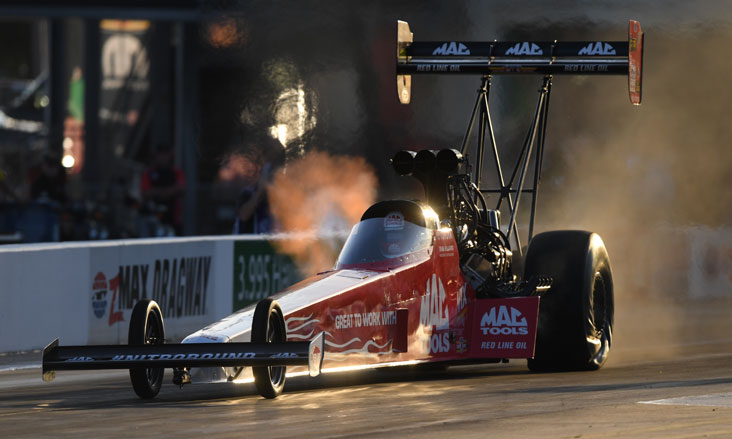 “We have had an awesome race car since Labor Day. It was very consistent all season but lately it has really come around. I feel very confident driving it and the performance on race day has been great. We always expect to win with this Mac Tools dragster and there is no reason to think we can’t make a run for this Mello Yello championship. We are running really well all day in Charlotte and we just smoked the tires in the final. You want to be in a position to win races and we were right there. I am excited to get to Dallas in a couple days and get right back on the track. This is a great facility and we are looking forward to running really well there. This is one of the final three races so we have to stay at the top of our game. It will be a tough race but we are ready for the challenge.”

“We are not out of the championship Countdown by any means but we do need to make a move at the Texas Motorplex. We had a tough first round against Doug in St. Louis and in Charlotte we just missed it in the first round. This DHL Kalitta Air dragster has been running really well in qualifying so I am not worried at all. You look at the level of the Top Fuel teams in the Countdown this year and even previous years. This is one of the toughest eras in the sport’s history. If you get a win this year you will most likely have had to race easily three championship-caliber teams. There are no easy round wins. You can’t take one single round off and I am eager for the challenge starting this weekend.”

“Thankfully the Countdown lets you have one slip-up without ruining your championship plans. We didn’t have the kind of success we were hoping for on the rained-delayed race on Monday but we put that behind us. We are ready to get to the Texas Motorplex and get back to the final there. I want to get a Funny Car win to go with my Top Fuel win. There are a lot of Funny Cars that are running strong. We are definitely one of them. The key to race day success is to make four good qualifying runs. We got behind the eight ball in Charlotte and that is what cost us. We are focusing on coming out of the gate strong on Friday in Dallas. That second qualifying session on Friday under the lights will be a critical run for all the teams. I like my chances with these ‘Yella Fellas’ on my DHL Camry.

“The Carolina race set us back a little but if you look at the points no one is running away with the class. I still have a lot of confidence on our chance to win the championship. There has been a different winner of every Countdown race in the Funny Car class so far this season. That shows you how competitive and wide open this class is. My team has given me a great race car and I just have to go out there and keep it in the groove. We are ready to take on these next three races, but our championship race starts this weekend at the Motorplex. We will be looking to get some of those qualifying bonus points and clawing our way back up the point standings. "

"I was pretty happy leaving Charlotte because our car is performing well. Knock on wood, it seems to be running okay now, and that helps my confidence level. It's good that we're going to Dallas this week without too much time in between, because I feel like we're back on track with our racecar. Blake Alexander and Dan [Wilkerson, crew chief] will be running there, and they're doing their own thing and doing well. They're going to be an asset, not a distraction, and with any luck hopefully we can share some data. We're pretty excited about that, too." 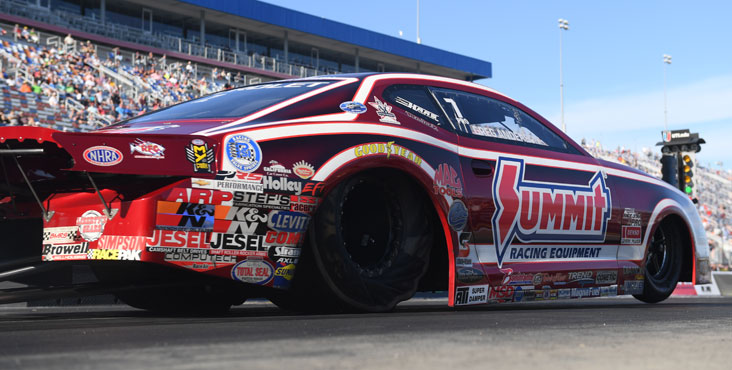 "Last weekend we did not see the results that we could have and should have, but that's why we're eager to get to Texas Motorplex. We have a chance to get back on course, and we'll gladly take that opportunity and make the most of it. This racetrack has been great for us, and we've had a day or two to reset before heading that way. I think we have a very good weekend ahead of us, we just have to keep our heads on straight and make the most of every single run down the racetrack, both in terms of the driver and the car. We have to be perfect."

"If we do what we're supposed to do, the points will take care of themselves. I believe my Summit Racing Chevrolet Camaro is one of the best cars out there, and I feel fortunate to get to drive it. Last weekend didn't go as planned, but I don't think you'll see a repeat of that in Dallas. Not this weekend, and not for the rest of the Countdown."

"We had a bad day in Charlotte, but it was a good race, and we don't have anything to complain about. The other teams have found something, and I don't know what, but they're ready. We have to be ready, too. I look for Dallas to be a good race for us. We got some bad luck out of the way in Charlotte, and now we're starting with a clean slate.” 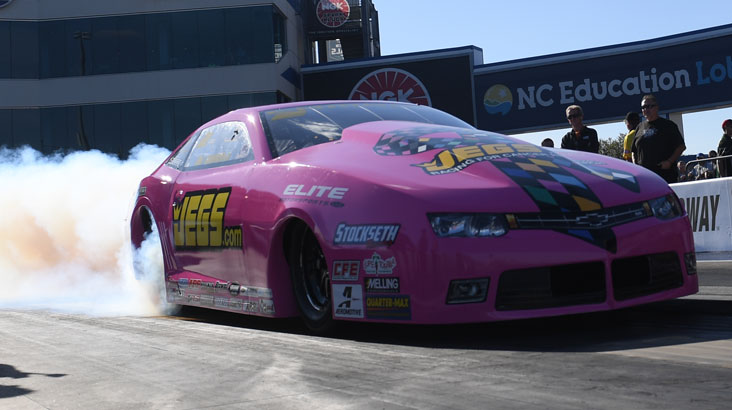 "We're five rounds out of the points lead with just 12 rounds left in the season so we need some things to fall our way to be there in the end. In our case, we're looking to be aggressive from Thursday when we arrive until Sunday when we leave. We want to win four rounds on Sunday and if we're going to pull this off then we can't make any mistakes. I have come back from bigger deficits in my career, so it is doable. It's actually going to be a fun challenge for both me and my team."

“My goal going into Charlotte was to leave with the points lead and the second part of that goal is to never give it back. We’ll do our best to keep it. We’ll go to Dallas and it’s a track that’s been good to us in the past. Our goal is to leave with another cowboy hat and belt buckle. I think we just do what we do and don’t take our eyes off the goal. This Countdown feels like 2014 and 2015 to me. We’re back in championship form so it’s big to have that mindset where you don’t back off or don’t let your guard down. It’s all mental and that’s the most challenging aspect of all it. The biggest thing is to stay positive, keep our focus and not let any distractions in. This is our championship to lose, but there’s a lot of racing left and a lot of heavy competition out there, so we’ll see what happens and do the best we can.”