What’s ahead for Tommy Johnson Jr. as he heads into the Countdown battle?

After arguably the most consistent regular season in his Funny Car career, Tommy Johnson Jr. hopes it translates into more clutch performances in the Mello Yello Countdown to the Championship and possibly his first career world championship.
12 Sep 2019
Posted by NHRA.com staff
Feature

Tommy Johnson Jr. has had no trouble finishing his NHRA Mello Yello Drag Racing Series season on a high note. After arguably the most consistent regular season in his Funny Car career, the veteran standout hopes it translates into more clutch performances in the Mello Yello Countdown to the Championship and possibly his first career world championship.

Johnson heads into the six-race NHRA playoffs in third place, just 30 points behind leader Robert Hight. With a history of strong Countdown to the Championship performances in his 11,000-horsepower Make-A-Wish Dodge Charger SRT Hellcat, Johnson, who has finished in the top three in four of the past five seasons, will look to continue that trend at this weekend’s 35th annual Mopar Express Lane NHRA Nationals presented by Pennzoil at Maple Grove Raceway. He knows what it will take to compete for a world title and Johnson will try to send an impressive opening statement at a track where he has two career victories. 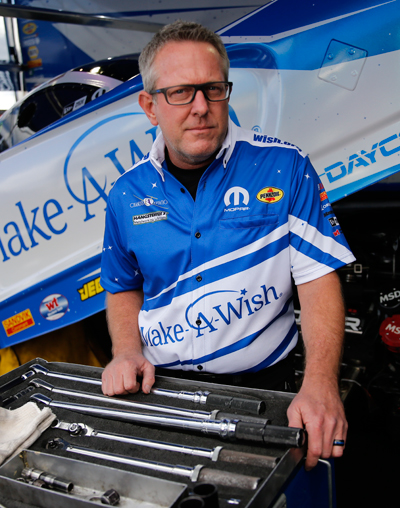 “The biggest thing you have to do in the Countdown is avoid mistakes,” said Johnson, who has 19 career victories. “You have to eliminate them and minimize them, because one bad race kills your chance for a championship. The key definitely is minimizing the mistakes and being consistent. You have to bring it every round from now on. Everybody has to focus on their job and do it perfectly. You don’t get many chances to make it up in this Countdown.”

Steve Torrence (Top Fuel), J.R. Todd (Funny Car), Vincent Nobile (Pro Stock) and Hector Arana Jr. (Pro Stock Motorcycle) were last year’s winners of the event that will be televised on FOX Sports 1 (FS1), including final eliminations on Sunday, Sept. 15 at 2 p.m. (ET). Both Torrence and Todd used that momentum last year to win their first world titles, and it’s a trend Johnson would love to repeat at the 19th of 24 total races during the 2019 season. It’s a year that has already included two wins, four final rounds and six semifinal appearances, but Johnson wants more.

Specifically, he’s after his first world title, but his team, led by crew chief John Collins, is built for the arduous playoff road. It’s a group that has been together for a number of years, building the chemistry and cohesiveness necessary to win a championship. Johnson continues to be impressed with the maturity of the team, something that is needed during the tense moments of the playoffs. Starting that journey in third also adds momentum for what’s at stake.

“It definitely gives you more optimism,” Johnson said. “It makes it a little easier to get to the top if you don’t start clear at the back. I know this is a time where we shine, so that gets me excited. We’ve ran better all season than we have in the past and knowing in the past we’ve done well (at Maple Grove), and getting off to a great start definitely sets the tone. You still have to do the job, but it’s nice to know this is the time of the year where your team usually does the job.”

With a loaded championship field, nothing will come easy. Hight and teammate John Force, who won at Indy, are in the first two spots, while the Don Schumacher Racing foursome of Johnson, Jack Beckman, Ron Capps and Matt Hagan follows. Add in title contenders Bob Tasca III, Todd, Shawn Langdon and Tim Wilkerson, and Johnson knows he has his work cut out for him over the final six races of 2019. But he’s thrived in the Mopar-sponsored races this year, winning in Denver, and that added attention seems to fuel Johnson’s focus during an otherwise busy weekend.

“It would be cool if we could win another Mopar race,” Johnson said. “There’s no more diehard fans than the Mopar and Dodge people. They turn out in droves for these races, and it’s cool because Reading has such a long history. The race fans are so passionate out there. It’s just cool to go out there and I look forward to it. It’s all about hitting our stride at the right time.”

To purchase general-admission or reserved seats, call 610-856-9200. Tickets also are available online at www.maplegroveraceway.com. Kids 12 and under are free in general admission areas with a paid adult. To honor the Salute to First Responders, military and first responders can save 20 percent on general admission tickets at the gate.