For two fans, when it comes to the U.S. Nationals, it's a lifelong love affair

At this year's Chevrolet Performance U.S. Nationals, as they have been for the last 60 years, when the event was held in Detroit, two longtime fans of the sport will be settled into their seats watching all of the action at the 65th edition of the "Big Go."
09 Aug 2019
Phil Burgess, NHRA National Dragster Editor
DRAGSTER Insider 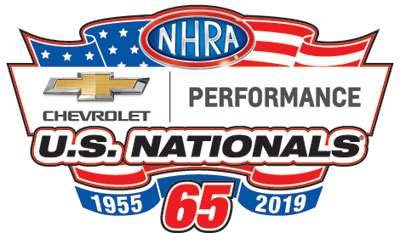 It’s one thing to say you’ve been to every edition of the NHRA New England Nationals, which is just seven years old, but when it comes to an event like the Chevrolet Performance U.S. Nationals, which celebrates its 65th running this year at Lucas Oil Raceway at Indianapolis, you’re not going to find anyone who can say that they’ve been to all 64 previous Nationals, especially considering the geographic challenges for a race that started in Great Bend, Kan., in 1955 before moving to Kansas City, Mo. (1956), Oklahoma City (1957-58), and Detroit (1959-60), before landing in Indy in 1961.

Yet I’ve found two guys who’ve been to 60 of them, beginning when it was held in Detroit. Some of you may know the name of Bill Wendt for his years running in the Alcohol Funny Car class, but he started his NHRA love affair in 1959 at the Nationals in Detroit. I’ve known Bill since the 1980s, when I palled around with several Texas-based Alcohol Funny Car teams. If you’re a longtime NHRA.com visitor with a good memory, you may also remember Bill Nelson, whose story I told a dozen years ago on this website as part of our coverage of the 2007 U.S. Nationals. Nelson’s first Nationals was the 1960 event in Detroit but, like Wendt, he hasn’t missed one since. I’d been communicating with him via email for years before that before we finally met at that 2007 event. Here are their stories, as alike as they are different. 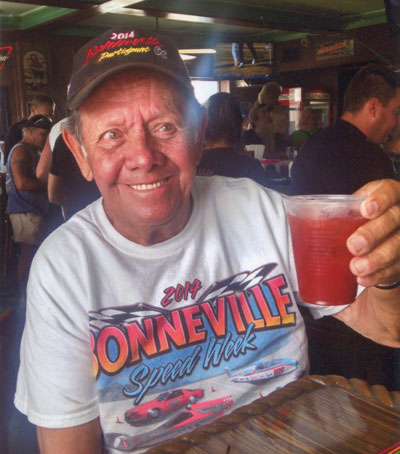 At 80 years of age, Wendt has seen a lot of drag racing, whether it was from the grandstands or behind the wheel of his Smokey Bear Alcohol Funny Car, but it all began with a trip to the NHRA Nationals in Detroit in 1959, and he hasn’t missed the event in the 60 years since.

“In 1959 and 1960, my best friend and I drove from my home in Monticello, Ind., to the Nationals in Detroit, as spectators,” he remembers. “Being teenagers, we slept in my new Studebaker Lark. When the race moved to Indy in 1961, and for the next four years after that, we slept on the ground next to my -32 Ford two-door sedan street rod (that I still have) behind the Claremont schoolhouse.

“We washed each other off with the garden hose at a gas station, but that ended when a Claremont police officer shined his light on us and said, ‘Are you guys crazy? We run the police dogs here every night!’ “ 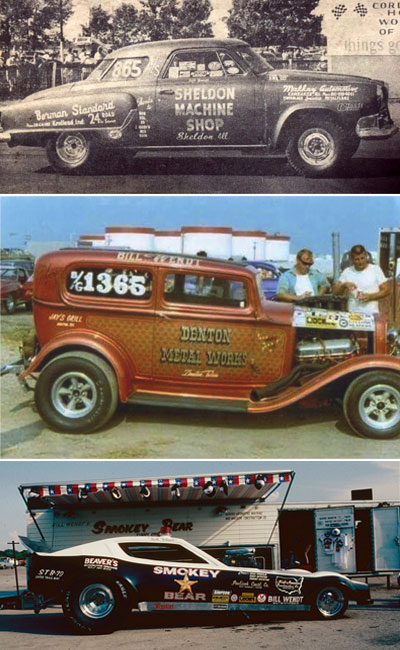 Wendt transitioned from fan to racer, and from 1966-68 ran his very competitive V-8-powered ‘52 Studebaker in T/Stock, then graduated to running the Ford in J/Gas and later in B/Gas and B/Altered.

“I became partners in the Smokey Bear Funny Car and soon owned all of it. Simon taught me how to drive a Funny Car, and I did very well with it for about 11 years and I ran it at the Nationals several times and I was also on Armstrong's crew when he won Pro Comp in 1974-75. I had a lifetime sponsorship with [safety equipment manufacturer] Bill Simpson because I took his son, David, into my home, taught him to weld, mentored him, and had him on my race team.”

After he sold the Funny Car, he moved to Cape Coral, Fla., and got very involved in land speed racing and currently holds two records at the Bonneville Salt Flats. He also does a lot of vintage oval track midget racing, both on dirt and asphalt, and hopes soon to drive are-creation of his Smokey Bear Funny Car being built in Texas.

And, of course, there’s his annual trip to Indy for the Chevrolet Performance U.S. Nationals.

“For many years I stayed in the hotels that great friend John Menzler,” he remembers. “We blocked rooms in, along with a cool bunch of racer friends: [Frank] Manzo's bunch, Brad Anderson’s bunch, etc.

“Nowadays, if I am not invited to a suite, I sit, as I have for countless years, at the 1000 Foot Club with good friend and talented announcer Bret Kepner and the many fans that occupy that corner.” 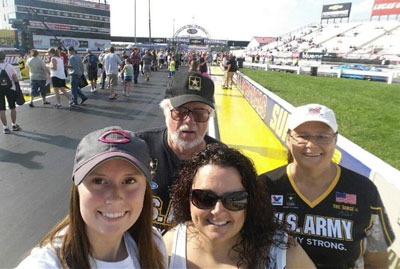 Nelson was just 19 and a resident of Dayton, Ohio, when he and four of his Dayton buddies, who hung out like Kil-Kare Raceway, decided to make the 200-mile trip to Detroit for the 6th annual Nationals, and this year he’ll enjoy his 60th “Big Go.”

“We were only there Sunday and saw George Montgomery, Art Arfons-Green Monster, Ramchargers and others make timed runs,” he recalls. “Then we went to Canada for a few hours before returning home. The next year, when the race moved to IRP, we went Saturday, Sunday, and Monday, staying in one of the infamous mom and pop motels on RT 40.

“One year we stayed at the Lincoln Motel in Indianapolis which got a little rowdy, but nothing like the campgrounds outside the track on both sides of Route 136. Another year we camped out at the golf course with a bunch of crazy Canadians who did burnouts all night. Some of the outstanding racers of the 1960s that left an impression were ‘Big Daddy,’ ‘The Snake,’ Eddie Hill, Pete Robinson and Bobby Vodnik. I’ve seen a lot of firsts, like the first year for the Christmas Tree in 1963 and ‘Ohio George's’ third win and when nitro was introduced in '64. We’d cheer for other Dayton drivers like Fred Hurst, Richard Doane, Jerry Ault, and Keith Ferrell.

“The ‘70s started with me getting married and it was understood that Labor Day was booked indefinitely, and I would not be around for any picnics. That year, 1970, came the immense popularity of the Funny Cars, with Don Schumacher, Don Prudhomme, Ed McCulloch, and Tom McEwen and Top Fuel standouts like Gary Beck, Don Garlits, and Steve Carbone just to name a few. Pro Stock also came on the scene in the 1970s with Sox & Martin, Bob Glidden, and Gapp & Roush. In those days I would stay at various places, spending on average three days a weekend most years.

“I remember in 1980s during the Big Bud Shootout one year that Ed McCulloch did a big no-no and drove his car back to the pits under power which, of course, is frowned on. The Funny Cars seemed to remain more popular than the Top Fuel throughout the ‘80s and ‘90s. I remember around’ 94 that it rained a lot that weekend and they had to turn the lights on and Monday Connie Kalitta won Top Fuel over Eddie Hill, who seemed to be the fan favorite.19 96 was a bad year due to the loss of Blaine Johnson and Elmer Trett. 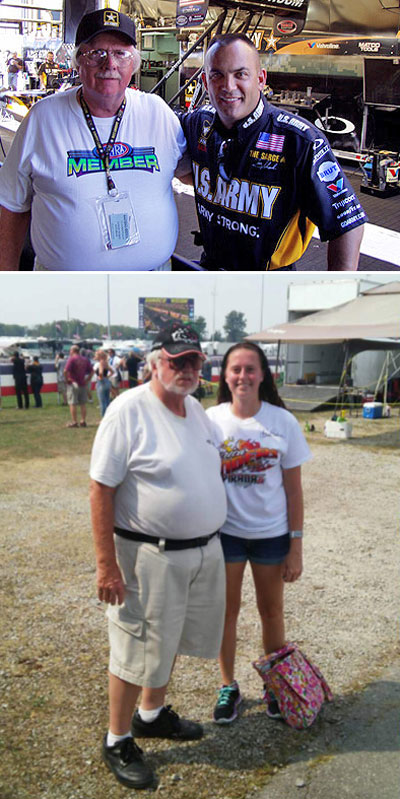 "From 2000 to 2010, a company I worked for had Schumacher Electric as a customer which I was and I was fortunate enough to establish a connection with them which led to me having the opportunity and privilege of being a part of the DSR hospitality experience, which has continued through the present time. I can’t thank them enough for their hospitality.

"Two of the granddaughters around this time became really hooked and among the most frequent to tag along with Grandpa. They also got interested in the bikes as well when Angelle Sampey and Antron Brown ran the bikes. Nowadays they are fans of Erica Enders and Leah Pritchet -- gotta support the women, you know -- and we have all become big fans of the Schumacher/DSR team. My favorite Funny Car drivers are Jack Beckman, Matt Hagan, and Tim Wilkerson. Pro Stock is Erica Enders, and Jeg Coughlin Jr. Top Fuel is Tony Schumacher and Antron.

"Through the years I’ve taken many, many friends and family, starting with our three girls and moving onto the grandkids. I remember one year we stayed real late and the kids watched the finals from the roof of the car under the lights; they thought that was the greatest!

“I have a lot more stories and memories, but bottom line has been the bonding of family and friends that stands out the most. I would not trade those memories for the world.”

For ol' P.B., this will be my 37th straight U.S. Nationals and after reading of the Indy history of the two Bills, I can't help but feel I'm still an Indy rookie.