Twenty-five years in, Capps reflects on the secrets to his longevity and success

The 2019 season marks Ron Capps’ 25th year of nitro racing, a career filled with equal parts good luck and hard work that have allowed him to remain one of the sport’s finest and longest-tenured drivers. In this exclusive interview, Capps shares some of the secrets of his success and longevity.
06 Feb 2019
Phil Burgess, NHRA National Dragster Editor
Behind the Visor

The 2019 season marks Ron Capps’ 25th year of nitro racing, a career filled with equal parts good luck and hard work that have allowed him to remain one of the sport’s finest and longest-tenured drivers. The 2016 Funny Car world champ and 61-time event winner shared some of the secrets of his success and longevity. 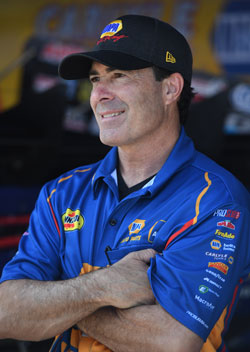 I remember the first time I did it. I was filling out a loan application for our first house and to write down “race car driver” as my occupation was just one of the coolest things ever.

It’s hard to believe it’s been 25 years since then. I’ve come a long way, from being crew guy with Jim Rizzoli on his Top Alcohol Dragster to driving for legends like Don Prudhomme and Don Schumacher. I never would have thought that could happen. Mine is really a story of being in the right place at the right time, meeting the right people, and working my ass off to always be better at everything.

When Shelly and I got married in November 1992, I had just spent the year on the road with Rizzolli. She knew I wanted to see if I could make a career out of this, and she told me to go give it a try, to get it out on my system. I guess I never did get it out of my system because here I am, all these years later, still doing it. 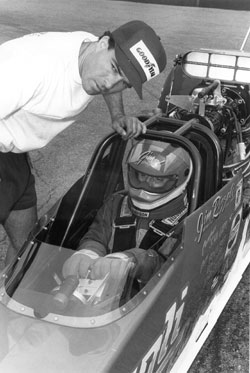 I raced with Darryl Hitchman in 1993 and toured the country. We shared a hotel room: him, his wife, me, and our crew guy, Willy, and I’m not talking a Sheraton or a Hilton. We were in some dives, and it was hard being away from Shelly. There are many times I thought, “This isn’t what it’s all made out to be,” but then there were also times where I was like, “Man, I know I could make a living doing this.”

That year, I met John Mitchell, who let me license in his alcohol car, and the next year I started driving for him. I guess I did a good enough job that I caught the eye of Roger Primm and Terry Manzer, who were running a Top Fueler. The next thing I know, I’m on a list of potential drivers — a real Who’s Who with guys like Gary Beck and Gary Scelzi — and they chose me. I started driving for them in 1995, and we did pretty good. We were runner-ups in Atlanta, and we won Seattle.

I learned to listen to the car, to feel the car, and how to take care of the parts. Apparently, Don Prudhomme had been watching me too, because he called the next year to say he was thinking about adding a Funny Car to his team. It was just crazy. I hung up on him because I thought it was a prank; I mean, a lot of guys do good Don Prudhomme impressions, and it wasn’t until his wife, Lynn, called me back that I believed it. 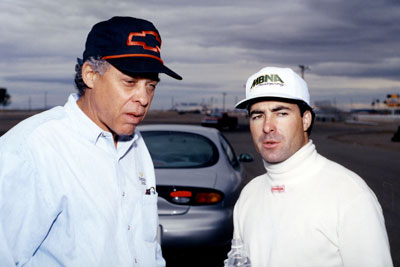 He asked me if I would ever drive a Funny Car, and I remember telling him I’d drive his motorhome for him. He had a sponsor meeting he wanted me to come to, and I had to call him back and tell him that I didn’t even own a suit or a sport coat, so he fronted me some money. It was unbelievable to be standing next to him let alone with the chairman of the board of a big company like Copenhagen.

But I had a real dilemma. Roger was on the verge of getting a big sponsor, and I felt an obligation to him because he’d already offered me up the best thing in my life, but was I gonna tell Don Prudhomme, “Thanks, but no?” But Roger didn’t get the deal, and a week later, I got the phone call from Snake that Copenhagen said yes. I don’t know where I’d be if either of those decisions had gone the other way.

I had a lot to learn. Snake had learned it all over the years — what to wear, what not to where, how to pack for what you’re going to do, and how to present yourself even while traveling. I learned how to take care of a sponsor, what to do, and what not to do. We had Miller brewing company as one of our sponsors, and I learned that if you’re at a dinner table with them, you didn't order a beer in a glass. You got a bottle, and you kept the bottle on the table, full or not, so if somebody walked by, they saw it. It was just little things that I just never would’ve thought of. And it’s carried onto these sponsors that I’ve had and the longevity I’ve had with sponsors, especially with NAPA. 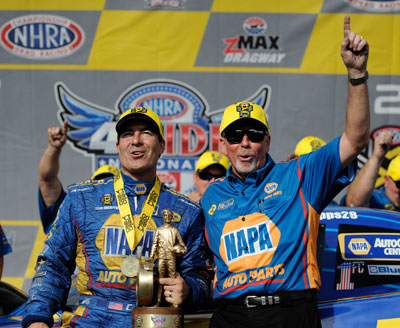 I still drive my NAPA car like I’m driving for Roger Primm or John Mitchell and take care of my parts. I still try to learn every day, whether it’s from my crew chief Rahn Tobler or team owner Don Schumacher. I’m proud of what we’ve accomplished with our sponsors, but I work my butt off. Taking care of sponsors in fun but it’s also hard, yet you’ll never hear me complain about traveling or about anything I have to do for a sponsor. We’ve won 61 races and a championship, but I still wake up in the morning thinking about how to be better at everything in my job. — As told to Phil Burgess