When Steve Torrence won six-straight races to close out his 2018 championship season, some predicted the feat might never be duplicated. As it turns out, it might be duplicated next weekend in Bristol after the reigning Mello Yello champion won his fifth-straigtht title at the Menards NHRA Heartland Nationals presented by Minties. Torrence shared the spotlight in Topeka with the only driver who has even come close to matching his dominance this season, Funny Car's Robert Hight.

Torrence, who won his first national event in the Top Alcohol Dragster class at Heartland Motorsports Park in 2005, will long remember his latest win after defeating his father, Billy, in the final round. Far from a gimme, Steve held on to win by just eight-thousandths of a second in the all-Capco bout. It was NHRA's second father-son Top Fuel final after the 1994 Gatornationals, where Connie Kalitta defeated his son, Scott. Torrence now has 36 wins in his career counting his four alcohol wins.

Hight has now won four of the first Funny Car races of the season after beating Jack Beckman in the final round. Hight and his Auto Club team, led by Jimmy Prock, came from the No. 9 qualifying spot to reach the final where he stopped No. 10 qualifier Beckman, 3.895 to 3.969. Hight now has 49 career wins which ties him with NHRA legend Don "the Snake" Prudhomme.

TOP FUEL CHAMPION STEVE TORRENCE: "This is something that will probably stand out forever. I've raced with my dad growinig up. I watched him race and that's what made me want to race. To compete at this leve in Top Fuel; to be the No .1 and No. 2 qualifier in almost every session and to carry that momentum into race day and climb through the ladder is special.

"To see how well he drove he drove. It's expected that I do well but that guy gets in the car every now and then and comes out and kicks butt. I think he moved back into the top ten. Aside from my first final ever and first race win this is right at the top if not above it. We're both competitive. He wanted to win and I wanted to win. My guys saved me. I had a little better race car. He left on me and we went a little bit quicker. We don't have any team orders. That guy was trying to end the streak quicker than anyone. Before the final he told me I had the easy part done."

FUNNY CAR CHAMPION ROBERT HIGHT: "This is the second time this year we've been in the bottom half of the field. We just had bad luck. We didn't miss it or do anything wrong. We just had bad luck. Finally, we got it together in Q4 and had low E.T. of the session and then low E.T. each round on Sunday with this Auto Club Chevy team.

"I think there was a little but of luck involved in the semifinal round. When you go through the ladder the way we did with Shawn Langdon, who is great on the Tree, and then J.R. Todd, who is the champ for a reason. We went up against Tommy Johnson, who won last week and then Jack Beckman, who is a former champion. It doesn't get any toughter than that. This one here was well-earned. " 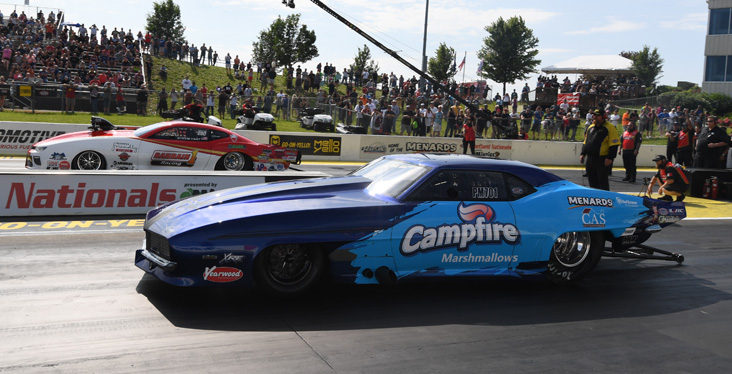 Steve Jackson, far lane, extended his lead in the E3 Spark Plugs Pro Mod series with a final round victory over Clint Satterfield. Jackson now has two victories this year. 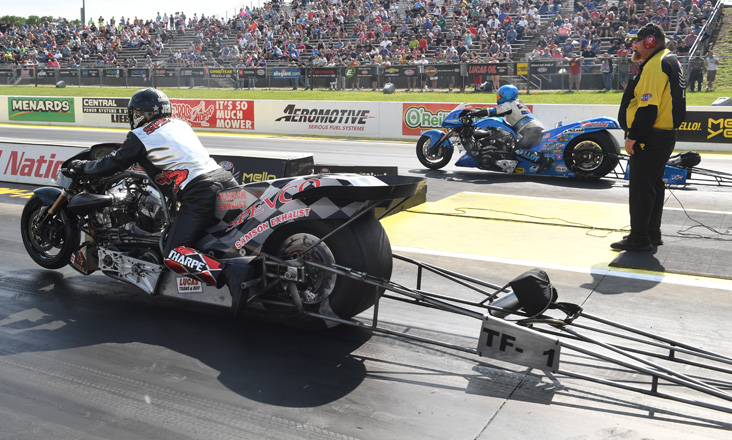 Reigning NHRA Top Fuel Harley series champ Tii Tharpe, near lane, earned his first win of the season  with  a final round victory over Bob Malloy, 6.313 to  a slowing 7.391.