Richie Crampton isn’t all the way there yet, but he feels like his Kalitta Motorsports team is on the right track heading into this weekend’s NHRA Sonoma Nationals.
23 Jul 2019
Posted by NHRA.com staff
Feature

Richie Crampton isn’t all the way there yet, but he feels like his Kalitta Motorsports team is on the right track heading into this weekend’s NHRA Sonoma Nationals at scenic Sonoma Raceway. With the Mello Yello Countdown to the Championship quickly approaching, that’s a good thing for the Top Fuel standout and his talented team.

Crampton started the Western Swing with a round win on Sunday in Denver, which was preceded by a semifinal appearance in Epping in his 11,000-horsepower DHL dragster. There’s plenty more to accomplish during the 2019 NHRA Mello Yello Drag Racing Series season, but Crampton is confident his team will get there when it counts. Sitting eighth in points, Crampton is ready to see his team continue its upward ascension as he seeks his first playoff berth since 2016.

“We’re real close to being where we want to be to get that raceday consistency,” Crampton said. “I feel like (crew chiefs) Connie (Kalitta) and Kurt (Elliott) are where they want to be with the car. That’s just them working on our combination all season. I know Connie can win in Sonoma. I’ve seen it first-hand driving against this car, so it’s pretty exciting for me that they know how to get down these hotter race tracks. These next few races are going to be pretty critical for me.”

Blake Alexander (Top Fuel), Robert Hight (Funny Car), Jeg Coughlin Jr. (Pro Stock) and LE Tonglet (Pro Stock Motorcycle) were last year’s winners of the event that will be televised on FOX, including live final eliminations coverage starting at 5:00 p.m. (ET) on Sunday. It is the 15th of 24 races during the 2019 NHRA season and the second of three races during the famed NHRA Western Swing. Crampton will try for his first Sonoma win, but the dragster he’s campaigning has recent success at the facility with J.R. Todd’s win in 2016.

Todd is now the defending world champ in Funny Car, but that victory gives Crampton confidence. All four Kalitta Motorsports cars have wins this season, including Crampton’s victory in Gainesville, but he’s ready for more. He lost to Todd in that 2016 final and Crampton is ready for his first victory at Sonoma, which is one of his favorite tracks on the NHRA circuit. 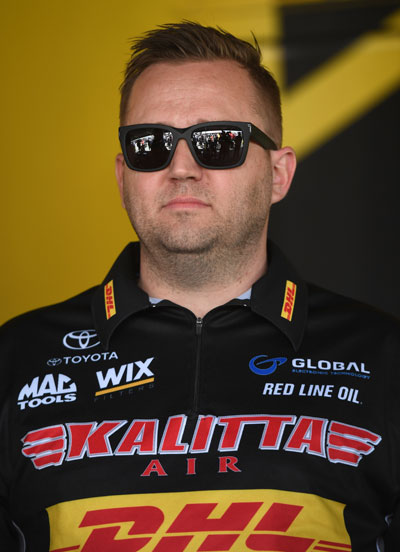 “I have a ton of confidence at a track like Sonoma,” said Crampton, who has nine career Top Fuel wins. “I love Sonoma. It’s a grade-A facility with a great fanbase and a beautiful part of the country. Before I’m done, I hope to have a Wally at Sonoma. We have to get down the racetrack, qualify well and I need to do my job inside the car. I haven’t been totally happy with my performance the last few races, but I think I’ll thrive on the pressure when the time comes.”

That means a “whatever it takes to get to the finish line first” mindset, especially in a loaded Top Fuel class that starts with points leader and defending world champ Steve Torrence, who has won eight of the past nine races in 2019. Crampton will also have to deal with the likes of Brittany Force, Leah Pritchett, Clay Millican, Antron Brown and teammate Doug Kalitta. He’s currently ahead of Scott Palmer, Terry McMillen and Austin Prock, who he beat in the first round on Sunday in Denver, and Crampton is determined to keep pushing forward.

“This is another race where I’m going to show up and do my best to try to win,” Crampton said. “You definitely look at and pay attention to the points, and it is an important crossroads of the season for me. But I love it. When you look at the car I get to drive and the team I get to drive for, I really relish the position I’m in. I keep that in mind when I go up to race. I love it and I’m hungry to win, and I know my team is as well.”