Justin Ashley enters the first eliminations round of his professional career today at the NTK NHRA Carolina Nationals after successfully qualifying in his Top Fuel debut.

Ashley, the son of former U.S. Nationals Funny Car winner Mike Ashley, cut his teeth in the Top Dragster and Top Alcohol Dragster classes, winning two events in the latter in 2017, and has partnered with Dustin Davis to break into the Top Fuel ranks. 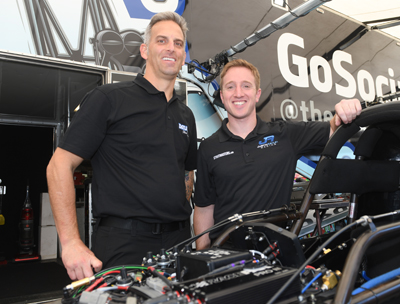 Ashley actually licensed more than a year ago with a 3.78 in Antron Brown’s Matco Tools dragster, then bought that car in which to make his debut. Versatile tuner Aaron Brooks is the crew chief for his debut.

It’s awesome to have Aaron on our team,” he said. ”I have a tremendous amount of respect for Aaron as a person and as a crew chief; he’s a championship-caliber crew chief and he’s an even better person, so to have him in our corner really means a lot. 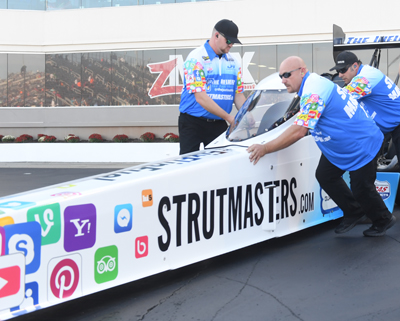 The car, which is covered with the logos of just about every social media platform on the planet, is called the Influencer, which he hopes to become for the sport and his sponsors, which includes Strutmasters.com.

“We wanted to do something totally outside the box and in today’s world –- and especially in today’s business world –- social media is so important, and we decided to focus on the social media market to try to promote our brand and the brands that are associated with our team using social media,” he explained. “We want the car itself to be an influencer. So far it’s been really good and we’ve gotten some very positive feedback.”

Ashley has also launched an online multi-episode documentary, dubbed Fix, Flip Fuel. The show gives a behind the scenes look at Ashley’s life as he balances his drag racing passion with his fix and flip business on New York’s Long Island, turning distressed properties into beautiful homes.

Ashley’s first official run was a 3.831 that assured he’d race Sunday, then he followed with a 3.863 Saturday to qualify No. 12 and earn a first-round date with Mike Salinas.

“I’m just happy to get a baseline to build off of,” he said. “It’s been a long road, so it’s very special to make my Top Fuel debut, but I’m trying to keep my emotions in check and do the best job I can do.”