Austin Prock may be the odds-on favorite to win the Auto Club Road to the Future award as the season’s top first-year driver in the Mello Yello classes, but the Top Fuel rookie isn’t preparing that speech just yet. He has bigger goals still on tap.
03 Nov 2019
Phil Burgess, NHRA National Dragster Editor
Feature

Austin Prock may be the odds-on favorite to win the Auto Club Road to the Future award as the season’s top first-year driver in the Mello Yello classes, but the Top Fuel rookie isn’t preparing that speech just yet. He has bigger goals still on tap.

Despite having already won a race and qualified for the Countdown to the Championship in his first year with the Montana Brand/Rocky Mountain Twist dragster, leading the class in reaction time average, and sitting sixth in points, the third-generation drag racer wants more in the season’s final two races.

“We need to get another win before the year is up,” he said. “The points are so close that you can move up two or three spots if you get a win. We’re a round out of fifth and about 50 points out of fourth, so we have a good shot at that.”

He’s checked off most of the goals on his pre-season wish list, but being more than 100 points out of the lead he may not be able to check them all, including the championship he dreamed of winning. 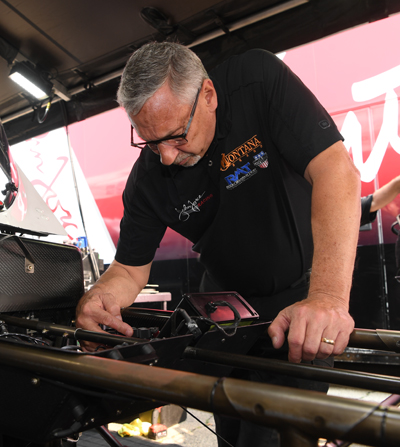 His season got off to a slower-than-expected start with just three round wins in his first seven events before team boss John Force brought veteran tuner Mike Green to the team beginning in Richmond.

“You obviously want to keep your sponsors happy –- that’s one of the most stressful parts about this job -– because they expect you to win and when you don’t win they’re not happy,” he said. “But bringing Mike is was huge. He told me we were going to take things slow and go step by step so when it does start running good we’re going to know exactly why it does. I’m so impressed with how good the team has come together and how well they perform. “I’m really happy with how it’s been going since we got Mike here. He’s made a lot of improvements.

Not long after Green’s arrival, the team solidified its spot in the Countdown Top 10 then scored their first win together in Seattle on the same day that Force won his milestone 150th Funny Car victory. He entered the Countdown in the eight spot and has moved up two spots, but he knows it could have been so much more. 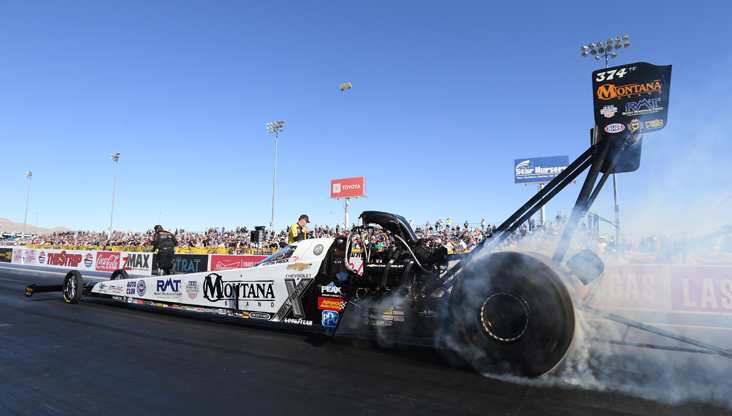 “If stuff would have fallen a little differently we’d be in a lot better spot to try to win the championship,” he said. Two weeks ago in Dallas, I thought it was going to be our day but we just pushed a little too hard on raceday. The week before that, in Charlotte, I got beat on a holeshot in round two. Everyone was ripping off .73s and .74s and we ran .75 and I had a .060 light and got picked off. How many times has an .060 light been beat on a holeshot?

“I was bummed out and pissed off, but Mike told me ‘You’ve won us 10 rounds on your driving, so don’t worry about it.’

“I feel pretty good about my driving. I feel like I’m driving the car; it’s not driving me, which is why I feel comfortable pedaling the car and have won some races on pedalfests. I feel like I’m up to speed with the car and able to catch it and get it to recover. And, of course, having the best starting-line numbers is huge for me. I’d like to keep that through the end of the season, too. 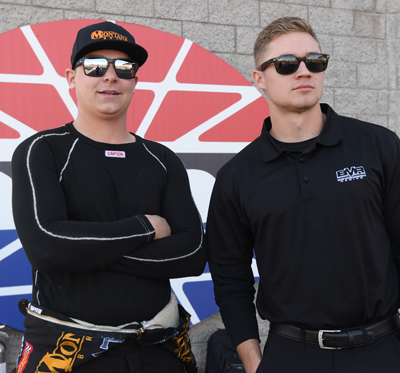 Jordan Vandergriff is Prock’s biggest challenger for the top rookie honor. Prock has 21 round wins and the Seattle victory in 22 events compared to Vandergriff’s 11 round wins and a runner-up in 10 starts. Prock made the Countdown and Vandergriff, due largely to his part-time schedule, did not. Prock holds a 2-1 edge in their head-to-head meetings.

“I feel like I have a good shot, but Jordan is definitely the biggest competition,” Prock admitted. “He’s done a great job this year and even though everyone is saying that we’re the favorites but I don’t want to get my hopes up. It’s not like I’m writing a speech. I’d probably just go up there and wing it anyway."

Before any of that, there’s raceday in Las Vegas and the season-ending Auto Club NHRA Finals. That’s all that’s really on his mind.

“I’ve dreamt of this since I could think,” he said. “I need to finish out strong.”