NHRA fans get to see five-second Pro Mod cars at least a dozen times a year, but how many of those cars are street legal, or capable of being driven even a few miles on public roads? The answer is almost certainly zero which is what makes Tom Bailey’s performance at Hot Rod Magazine’s Drag Week presented by Gear Vendors Overdrive so special. The Michigan-based Bailey dominated the Unlimited Class during the recently completed 2019 Drag Week event, which includes five stops at four different dragstrips and over 800 miles of highway driving. After running a string of low six-second elapsed times early in the competition, Bailey unloaded a 5.99 at over 250-mph on Friday at Virginia Motorsports Park. It was both the quickest and fastest run in the 15-year history of the unique event, which attracted more than 350 competitors. Bailey also drove the car from track to track, pulling a small trailer that housed all of his tools, spare parts, and other support equipment.

“Sometimes things come together at the most opportune time,” Bailey wrote on his Facebook page shortly after the event. “I can relate to Friday the 13th and being the last car to make a pass with being in the World Series and it’s the bottom of the ninth inning with two outs and two strikes and down by one, you leave as either a hero or a zero. I drove a Pro Mod car to a street car race. Pro Mods run 5's, not 6's and even though it was barely [in the fives] we did it; two barriers in one pass, a 5-second pass and 250 mph in a car that was just driven up and down the East Coast all week.”

Bailey ran the table in the Drag Week Unlimited class by driving his turbocharged ’69 Camaro to a 6.299-second average for the week. Bailey made the quickest run in four of the five days and finished well ahead of second-place Bryant Goldstone, who averaged a very respectable 7.38-second average in his steel-bodied ’73 AMC Javelin. Bailey and Goldstone were part of a special Drag Week exhibition held during the Chevrolet Performance U.S. Nationals at Indy, a week before Drag Week.

There are more than a dozen classes at Drag Week to fit just about any vehicle imaginable. This year’s contestants included a full spectrum from James Eby’s vintage 1919 Franklin to the 2020 all-electric Tesla of George Dodworth, that ran in the 10.4-second range for most of the event. From a wheelstanding Toyota Four Runner to a twin-engine Chevy van, there was no shortage of variety.

In recent years, the Street Race Small Block Power Adder class has become a Drag Week favorite and this year nearly 50 cars vied for the title. At the end of the week, Randall Reed held off all challengers with an 8.519-second average from his turbocharged ’93 Mustang. 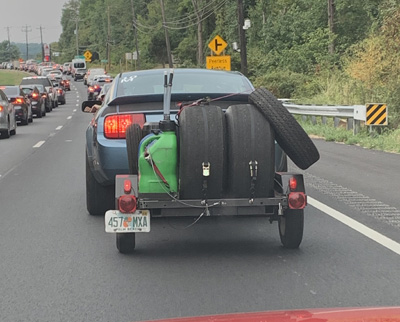 The final results from Drag Week (found here) clearly illustrate the performance of each competitor, but in many cases, they tell less than half the story. With over 800 miles of highway driving, the real challenge of Drag Week is simply making it through each day with a vehicle that is in race-ready condition. Many of Drag Week’s heroes earn their reputations through heroic roadside repairs and late-night thrashes in hotel parking lots. Flat tires and alternator belts are easy fixes, but Drag Week annually showcases heroic and seemingly impossible acts of mechanical fortitude from complete transmission, rear-end overhauls to full-on engine rebuilds. Day by day, stories begin to circulate (often backed up by proof via various social media outlets) of the superhuman effort that is often required to get from place to place. For nearly everyone who is a part of the Drag Week adventure, sleep is a rare commodity.

Barely a week after competing in the Chevrolet Performance U.S. Nationals, NHRA sportsman racers Matt Forbes and Brandon Wilkinson made their Drag Week debut with their flamed ’92 Camaro, a former Comp Eliminator car that has also raced in Super Stock and Super Street. During their Drag Week prep, Forbes and Wilkinson spent months modifying the car for street use, and also anticipating many of the possible challenges associated with the unfamiliar endeavor. The duo’s daily routine was well thought-out but grueling since it included swapping the rear-end gear twice a day with one ring and pinion set for highway use and another for dragstrip runs. Other than a few slight miscues, Forbes and Wilkinson passed their first Drag Week test with flying colors since not only finished the event, but managed a very respectable nine-second average. That was achieved in a car with no nitrous, turbocharger, or supercharger.

“We accomplished everything we sat out to do,” Forbes said. “We finished Drag Week, averaged in the nines with a NA [naturally aspirated] car, didn’t do it the easy way. Brandon and I don’t hate each other, yet. It really was a team effort and I wouldn’t want to do this with anyone else. We're already talking abut the things we did right and the things we did wrong, and what we could do differently next time.” 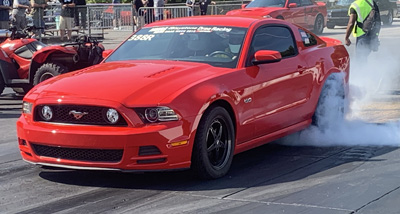 *****
My own Drag Week experience was a mixed bag, although ultimately rewarding since we were able to complete the marathon, something that more than 50 of the 355 starters were unable do. My ’14 Mustang has been a very reliable street/strip car since its debut in early 2018 and I had optimistic, although not totally unrealistic expectations to make the 32-car field for the Street Machine class. Two years ago, it took a modest 11.07 to qualify for the Friday bracket race that is used to decide the Street Machine champ. Last year, in my first Drag Week, that number plummeted to 10.74, and I was well off the pace with a 10.96 average. This year? Obviously, no one could tell in advance what the cut-off would be, but I had expectations of being able to maintain an average in the 10.7-second range. I figured to have a fighting chance because my car is slightly quicker than it was last year and the four tracks selected for Drag Week 2019 are all at sea-level, or close to it, which should have given everyone an E.T. boost.

The first day of competition was interrupted by rain, but the event organizers and Virginia Motorsports Park crew salvaged the day by quickly drying the track and prepping the surface. Limited to a single run, I may have been a bit over aggressive and it bit me when the car spun the tires and slowed from it’s normal 10-second pace to an 11.52. that proved to be a bitter pill since it all but ended any chance I’d have of making the quick 32. Things went from bad to worse on day two at Cecil County Dragway when an electrical problem cropped up and I had the embarrassing experience of limping to the finish line with a 40-second elapsed time. With the help of my co-driver and ace crewman Mark LaCroix, we were able to get the problem corrected and recorded a respectable 11.03 run before leaving Cecil County for the ride to Atco Dragway, the day three stop.

Taking advantage of Atco’s sea-level location and some nice cool fall air, our program came together on day three. After a 10.94 warm-up run, I decided to install the race gas tune provided by VMP Superchargers and was rewarded with a 10.80 run at 131-mph, a three-mph improvement over my previous best. We headed South for a return to Maryland for day four, which produced another 10.84-second run. Mulling the numbers, we realized that even though we were well short of the performance needed to make the quick 32, a 10-second average was still possible. The magic number to make that happen heading into the final day was 10.80.

Along with the rest of the weary road warriors, we returned to Virginia Motorsports Park for the final day of Drag Week where we were met with cool temperatures and overcast skies. A large number of Drag Week participants made their best runs of the event on day five and I was happy to join the crowd with a 10.76 on my only run of the day. A few quick calculations revealed a 10.992-second average for all five days. I was shocked when the final results revealed that I’d finished No. 35 out of 124 entries in the Street Machine class, missing the Quick 32 by just three spots. There’s always next year.

Ultimately, I had a lot to be grateful for. Counting the drive to and from my home in Indianapolis, along with a stopover in Reading for the Mopar Express Lane NHRA Nationals presented by Pennzoil, I covered more than 2,700 highway miles in nine days and did so with a minimal amount of problems. We also got to meet, exchange stories and shared the roads and drag strips with some of the most dedicated hot rodders in the world, which is perhaps the best part of the whole Drag Week experience. I can’t wait to do it again next year.