It’s already been a banner year for Todd Tutterow, but with a chance for a championship still within reach, the veteran still hopes to accomplish more to end the 2019 campaign beginning at this weekend's AAA Insurance NHRA Midwest Nationals.
26 Sep 2019
Posted by NHRA.com staff
Feature

It’s already been a banner year for Todd Tutterow, whose career-best season in the E3 Spark Plugs NHRA Pro Mod Drag Racing Series presented by J&A Service has also included his first NHRA victory. But with a chance for a championship still within reach, the veteran still hopes to accomplish more to end the 2019 campaign.

The class returns to action as part of the eighth annual AAA Insurance NHRA Midwest Nationals at World Wide Technology Raceway, but with only three races remaining, Tutterow knows he faces an uphill climb. He trails points leader Stevie “Fast” Jackson by 133 points, meaning it will take a near-flawless performance in his blown Al-Anabi Performance Chevrolet Camaro to track down Jackson. But that’s still the goal for Tutterow and it means having a certain mindset in St. Louis.

“We’re just going to hit it as hard as we can and hope for the best,” said Tutterow, who is third in points. “We should have capitalized at the last race. We put (Jackson) out first round, but we hurt the motor, so that cost us in the next round. That kind of stuff can’t happen. He needs to go out early and I need to try to win all three. We’ve got to try to win every race and see what happens.”

The race, which is presented by the Real Pro Mod Association (RPM), is the 10th of 12 events during the 2019 E3 Spark Plugs NHRA Pro Mod Drag Racing Series season and will be shown on Fox Sports 1 (FS1) and Fox Sports 2 (FS2). Jackson is the defending event winner of the race, something Tutterow knows can’t happen as both drivers seek their first NHRA Pro Mod title. 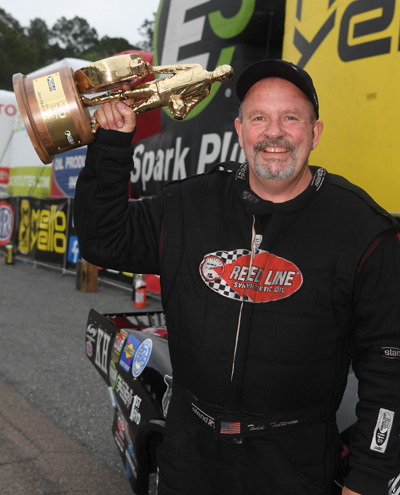 The longtime Pro Mod standout heads to St. Louis with confidence thanks to success at the track over the years in previous series, but nothing will come easy at the Midwest stop. Defending world champ Mike Janis is in second, 11 points ahead of Tutterow, while other class standouts include three-time world champ Rickie Smith, Indy winner Mike Castellana, Norwalk winner Khalid AlBalooshi, Bristol winner Jose Gonzalez, Sidnei Frigo, and Brandon Snider.

Tutterow started the season in incredible fashion, winning the first race of the year in Gainesville by beating Jackson in the final round on a holeshot. He advanced to the final round at the second race and will try to revisit that early-season magic to close out the year.

“I feel like we’re in a good place,” Tutterow said. “We did some testing last week, we got everything freshened up and everything is in good shape right now. I feel very confident in what we’re doing. We’ve been working on a lot of different things with the motor and other areas that have showed a lot of promise. Hopefully, we’ll have a good showing in St. Louis.”

Tutterow knows a win would be great, but he’s thinking big – as in try to win the final three races big. To get there, though, he has to find success in St. Louis first. The team bounced back from his crash in Topeka in June, but the new car is starting to come around. The first-round win over Jackson at Indy was big, but Tutterow knows he needs to finish the job the rest of the way.

“I would love to win the next three races,” Tutterow said. “That would put the icing on the cake for the season. It’s getting back to blower weather now and we’ll just have to hope for the best. We lost that one car in the middle of the season and that put us back. The new car has been good, but when you have as many laps as we did with the old car, we really had it under control.”

The RPM Association was created by Pro Mod team owners and drivers to preserve and promote the future of the category, helping fuel strong participation and interest in the class.

The first of four E3 Spark Plugs NHRA Pro Mod Drag Racing Series presented by J&A Service qualifying sessions takes place at 2:30 p.m. and 5:15 p.m. on Friday, and the final two rounds of qualifying take place on Saturday at 1:00 and 3:45 p.m. The first round of Pro Mod eliminations are scheduled for 12:30 p.m. on Sunday.