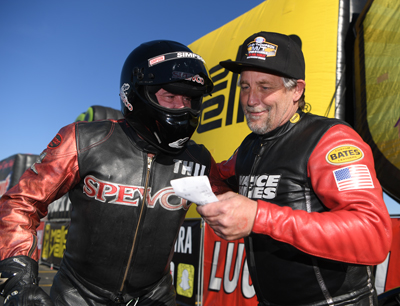 Tharpe, rider of the Spevco Harley that runs under the umbrella of Jay Turner Racing, leads by 27 points and can clinch the championship by reaching the final round. Vancil, who wheels the Vance & Hines powerhouse, comes into the event hot off of back-to-back wins in Seattle and Brainerd, the latter in a crucial final-round conquest of Tharpe. 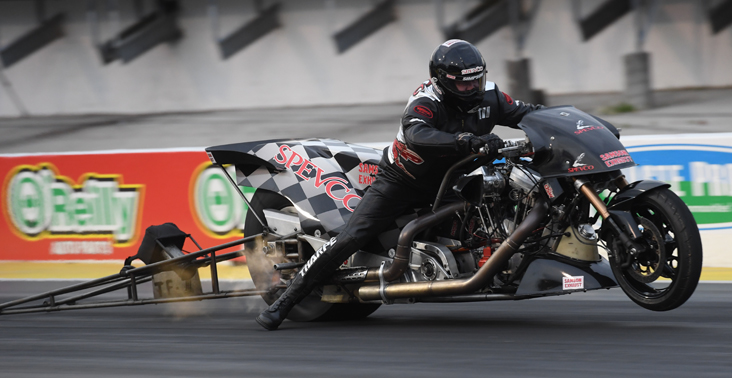 “I try not to think about the points too much, but obviously we’d like to leave here with two trophies,” said Tharpe, who is riding “Lagertha” (named after the feared Viking shieldmaiden), the bike that Turner rode to the 2017 championship. “There’s a little more pressure because last year I felt like we had nothing to lose because we didn’t have the lead, but we’re still feeling pretty good. I’m trying to ignore the pressure but it’s pretty undeniable.

“We’ve had some piston-ring problems the last few events –- we hurt it pretty good in Brainerd and had to run Doug in the final with a hurt motor –- but we think we’ve got it figured out. We’ve got some brand-new old stuff in the bike for this weekend.”

Tharpe benefits from being part of a three-bike team, with the bike driven by Turner and a new entry wheeled by 2018 AMRA Pro Fuel Harley champ Tyler Wilson, who made his debut in Brainerd. All three bikes run the same clutch tune-up and weigh within a few pounds of one another, giving the team reams of data to work from that Vancil’s single-bike team does not have. 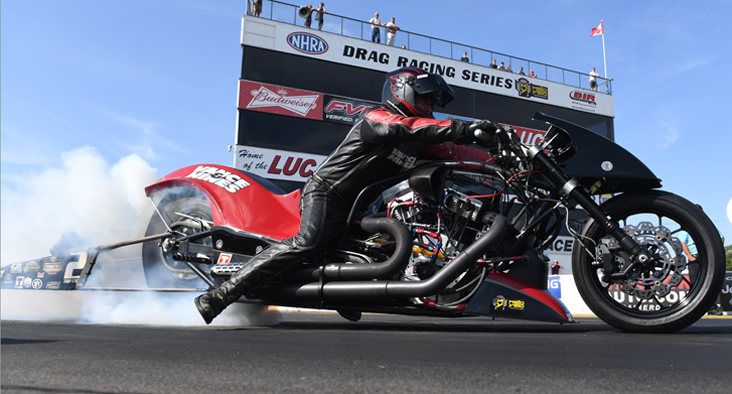 This year’s title race flips the script from last year, where Vancil had a small points lead (18 points) entering Indy but struggled in qualifying and ultimately surrendered the lead and the title to Tharpe. Despite his hot streak, Vancil knows he faces a steep climb to the championship.

“We just have to go race,” said Vancil. “Unless we race Tii early, we’re not really in control of anything other than our own bike.”

Vancil scoffed at the prospect that he could try to strategically qualify to try to earn a first-round race with Tharpe.

“With one of these things?” he asked incredulously, thumbing over his shoulder at the 235-mph nitro-burning monster in his pit area. “Anyone who tells you they can plan where they’re going to qualify, they’re full of crap or a helluva lot better than me. Good luck. We’re just going to go out and run as fast as we can and be the No. 1 qualifier and run our best.”